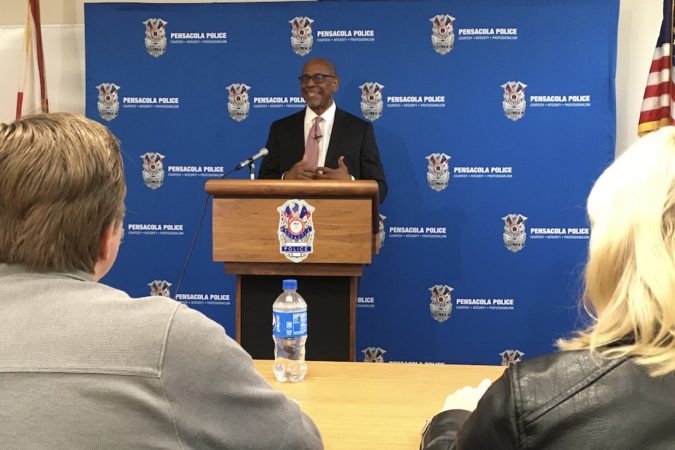 While the Pensacola Police Department’s implicit bias training may result in a more enlightened municipal force, Cedric Alexander said this week that he can’t say it will prevent an event like last summer’s fatal police shooting, during which an unarmed man was killed after officers pulled him over.

“I think that anytime that we have training,” Alexander said, “it has nothing to do, but wholly, in a total kind of way, help us understand who we are, to be more conscious of who we are. It becomes part of everything else that we are trained to do. But it does not say it’s going to prevent an unfortunate or sad type of incident, of any type of death that may occur.”

Pensacola Mayor Grover Robinson brought Alexander aboard recently to conduct training sessions with city police officers. Such training was recommended by a grand jury following the fatal shooting of Tymar Crawford by former Detective Daniel Siemen; the officer was fired after an internal investigation determined he violated the department’s use of deadly force policy.

Alexander, who recently returned to Pensacola to retire, boasts a career in law enforcement that began in Leon County and included stints in New York and Georgia, as well as Texas, where he worked with the U.S. Department of Homeland Security and oversaw security at the Dallas/Ft. Worth airport. Alexander also doctoral degree in clinical psychology.

The training with the PPD, Alexander explained Feb. 25 during a press conference, has consisted of sessions centered on implicit biases.

“It is built into the brain, and it is really more of a fear response of the unknown,” he said.

Through exploring the concept of implicit biases, Alexander said that local police officers will become more aware and conscious of how they are interacting with various segments of the community. The training is being conducted in two hour sessions, with the department’s executive level personnel receiving additional leadership training.

“It’s not threatening training,” Alexander said. “People don’t feel like anybody’s gonna come in and get beat up about who they are or where they grew up or what their beliefs were.”

In addition working with PPD on training, Alexander will also be participating in the creation of a committee tasked with, in some form or another, linking the citizenry with the police. The committee was a request, in the wake of the July shooting, from the community group Dream Defenders; the organization envisioned the committee having an oversight or advisory function, but it is unclear what the committee’s eventual mission will be.

Alexander said he would soon meet with Mayor Robinson to discuss the details of this citizen committee.

“What he envisioned that committee would look like and what its mission would be and who it would include,” Alexander said.