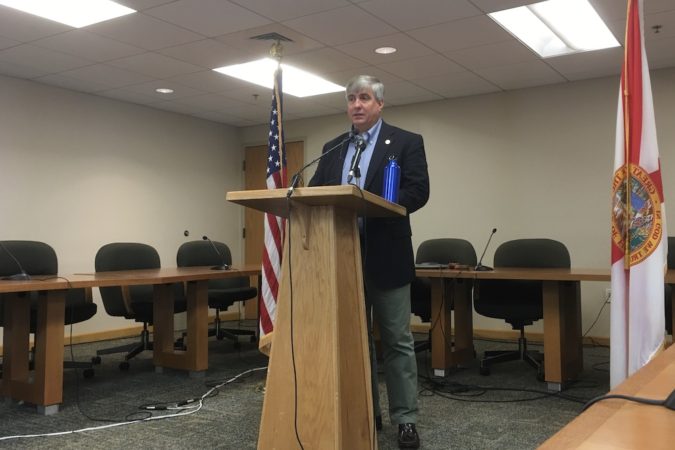 “It is a run that has tremendous history,” said Ray Palmer, president of Pensacola Sports.

Palmer explained that the Bayou Hills Run, which routes through the East Hill neighborhood March 28, will now serve as the event that decides the city champion runner. The organization took over as organizer of the run, which benefits the Creative Learning Academy.

“We don’t really have a run that has a tag of being a city championship,” Palmer said.

Other issues on the day’s agenda included the installation of 5G communications infrastructure, as well as further explanation about the city’s new position tasked with addressing the region’s issue of gun violence.

As per state law, local governments have no authority to dictate where communications companies locate 5G infrastructure. There are requests for the legislature to reverse this preemption legislation — the Pensacola City Council, for example, passed a resolution stating such a position — but Mayor Robinson said Monday he’s not optimistic about that prospect.

“I don’t think it’s going anywhere,” he said. “They don’t tend to like to reverse once they’ve done a preemption.”

As communications companies apply for permits, which is currently happening, the city is obliged to grant the permits—even if it means, for example, that a cellular tower would be planted in a residential front yard.

“We can’t just reject 5G,” the mayor said. “We empathize and sympathize with people who are upset.”

But, the mayor said, the city does have some cards to play, albeit a limited hand, when it comes to 5G. Local officials can pass an ordinance dictating certain aesthetic qualities. And the city can ensure that infrastructure is located in a safe locale, that it doesn’t create dangerous traffic scenarios, for instance.

Grant it, Robinson noted, no one is complaining about the aesthetics.

“No one has come to me and said, ‘Hey, put it here, just make it look better,’” the mayor said.

“We believe that co-location could solve a lot of our problems, but we can’t require it,” Robinson said.

The mayor said the city should also be requesting that the federal government have an independent assessment of the health impacts of 5G technology conducted; this is an issue some people have expressed concern about.

“Just give us a third party that tells me what is the impact on health,” he said. “I don’t know. I’m not a scientist; I’m not a doctor. I don’t know.”

Last week, Mayor Robinson announced the creation of a new city position aimed at combating gun violence. This position is not in law enforcement, but instead in the Neighborhood Services department, and will attempt to put a dent in the region’s gun violence by working with organizations in the community, such as churches and schools, to redirect youth from a life of crime.

Although Robinson had previously said he wanted to make a hire within a couple of weeks, he said Monday that he’s been advised it’ll take a bit longer.

“Keith came back to me and said, ‘Hey, if we move real fast we can get it done in six weeks,” the mayor said, referring to Keith Wilkins, the city administrator, and adding he planned to advertise the position soon. “I hope to have something out on the street in the next week or so.”

When making the initial announcement on this new position, Mayor Robinson did not detail how exactly the new city employee would function. He said Monday that the position was purposefully “really vague right now” so that it could evolve as needed.

“Keep it nimble enough to be able to turn,” Robinson explained, later adding, “I think if we get in there and engage we’ll start finding solutions.”

The mayor said that he estimated it would take six months to a year to be able to tell if progress is being made and also said that he didn’t view this new position as a fix-all solution.

“I don’t expect the answer to be one silver bullet. I expect it to be a number of things we do,” Mayor Robinson said. “This is a complex problem, and it will require a complex solution.”