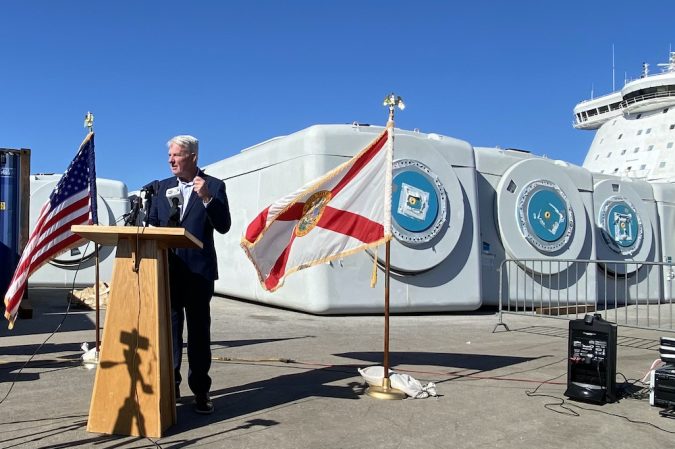 In the first of what looks to be shaping up into a slate of field trips to finish out this year’s regular Monday press conferences, Mayor Grover Robinson ventured out to the Port of Pensacola this week. A collection of cargo containers and Blue Origin’s hulking Jacklyn served as the backdrop for highlighting operations at both the port and the Pensacola International Airport, with the mayor handing off to newly ascended Director of Enterprise Amy Miller straight away.

“She’s just taken the reins, but as soon as she did, they blasted forward even further and better,” Mayor Robinson said of Miller, who formally headed up the port and now oversees all of the city’s enterprise operations.

Before introducing the director of both the city’s port and airport — Clark Merritt and Matt Coughlin, respectively — Miller started by pointing out the evolution of each in recent years, adding that each was currently “roaring strong” and “breaking all the records that they’ve ever posted.”

“You know, it wasn’t too many years ago when Pensacola International Airport was Pensacola Regional Airport,” said Miller. There were two airlines, and they both flew to Atlanta. You could show up 25 minutes before your flight and not have any problem getting to the gate on time. If you’ve been to the airport recently, that’s just no longer the case.”

Miller shifted to the port. “Likewise, the Port of Pensacola used to be the sleepy little port, not a whole lot going on. When you came in this morning, you saw something entirely different. If you haven’t been down here in a while, it probably surprised you, but there’s a lot going on at the port.”

Among the many aspects of society derailed by the coronavirus pandemic has been air travel.

“It’s been an interesting couple of years at the airport,” noted Coughlin, explaining that the pandemic put a halt to what had been a couple of years of double-digit growth in passenger counts at the airport. “Those numbers went down 92 percent overnight, just like the rest of the industry across the country.”

The airport director said that Pensacola has managed to stay a bit ahead of the national average when it comes to the pandemic slowdown and now has entered a period of growth again. This summer, passenger numbers were up 25 percent from 2018-19.

“Which is huge,” said Coughlin.

Additionally, the airport director continued the airport has added two new airlines to its lineup — Spirt and Boutique Air — and its number of available destinations hit 30 during the peak season. Also, he announced, Delta will soon be offering non-stop daily flights to La Guardia in New York.

“That’s going to give our customers more choice in their travel, and not only that but give them a non-stop option to get to the Northeast, which is great,” Coughlin said. “That’s really good for us to add to our portfolio.”

So, what’s the downside?

“With that growth, you see a lot of challenges around the airport,” Coughlin said, explaining that things like parking had become an issue.

To address such challenges the airport plans to add about 300 spaces, increasing parking by 10 percent. There are also plans for a new ramp that will allow for overnight aircraft storage.

“One of the big challenges we face is just the sheer number of bodies coming into the airport,” Coughlin continued. “So, one of the things we’re looking at right now is a new concourse.”

Ultimately though, the director concluded, the airport was experiencing resurgence growth that at times resulted in what amounted to “a good problem.”

Pensacola’s port is still rebounding from Hurricane Sally’s wallop last year, with FEMA-funded repairs ongoing. Even so, operations at the port are humming, with tenants making do in what can sometimes amount to a construction zone.

“It’s a little bit of a shell game in some respects, but the tenants work well together,” Director Merritt said. “I mean, they have to. We’re a 60-acre port, so you really have to make sure the pieces are moving fluidly.”

One of the port’s most visibly and famously impressive tenants sat directly behind Merritt — Amazon founder Jeff Bezos’s Jacklyn, named after the billionaire’s mother and will serve as Blue Origin’s landing vessel for returning spacecraft.

“When people say the only spaceport in Florida is Cape Canaveral, you can say, ‘No, the Port of Pensacola is in the space race,” Merritt said.

The port director detailed other port operations, such as longtime tenant CMEX, which has dramatically increased its importation of bulk cement from Mexico. He also highlighted efforts to diversify operations with the addition of Pensacola Bay Oysters, which has been using the site for a while now to grow oyster stock, a process that benefits Pensacola Bay waters.

“They pump it in, use it to feed their stock, and then they discharge it back into the bay, cleaner than when it came out,” Merritt explained. “So, that’s a great green program, diversified aquaculture, and it’s been very beneficial to have him on the port.”

And coming soon, Streamline Boatworks. Currently, the company is constructing its facility at the port, and a year from now should be turning out boats and employing around 60 people.

All said in done, even with its decreased operational capacity due to Hurricane Sally damage and ongoing repairs, Merritt noted that overall activity at the port is up this year, and overall annual revenue stands at nearly $3 million.

“Which doesn’t sound like a lot of money, but is for us,” the director noted, adding that the port doesn’t dip into the city’s general fund and carries no long-term debt.

Mayor Grover Robinson borrowed from Will Ferrell’s character in the movie “Talladega Nights: The Ballad of Ricky Bobby” in summing up his enthusiasm for the port’s performance, which has nudged the municipal enterprise into the state’s top 10-performing ports.