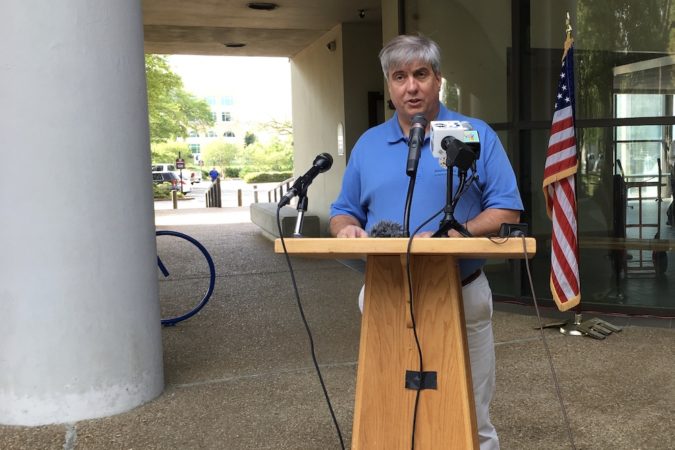 Nudging down a bit, the Pensacola area’s percentage of COVID-19 tests yielding positive results is running about five percent.

The mayor pointed to Ascension Sacred Heart’s testing, where there were 1,688 patients tested and 84 positive results, as a sign that measures being taken to prevent community spread are working.

“I think that means that some of the measures we’re taking are hitting,” he said.

Robinson said that currently local hospitals are not experiencing the capacity issues being seen in areas of the country experiencing significantly higher numbers of COVID cases, and he encouraged anyone with possible symptoms to self-isolate.

“That is the most critical part, is that individuals that are having experiences, or the symptoms, or perhaps even the virus, they need to quarantine themselves and self-isolate,” he said.

In Pensacola, as well as Escambia County, restaurants and bars have been closed, as they have statewide, but many other businesses have stayed open. Mayor Robinson noted that the city’s position regarding closures was a balancing act.

While saying that individuals who feel they can continue working — and are not employed in one of the sectors of the economy ordered shut down, — should be allowed to, the mayor also advised those in higher-risk categories, like older individuals or those with underlying health conditions, to reduce contact with others and said that anyone who felt vulnerable should take the appropriate precautions.

“If you feel like what you do is unsafe then you should be able to not go do that,” Robinson said.

Looking to the other side of the coronavirus upheaval, Mayor Robinson said he considers it important to keep coronavirus cases low in the area so that it doesn’t carry “the stigma of being a contaminated city” and negatively impact the summer tourism season.

“The worst thing that could happen now is for us is for us to have contamination. You cannot sell a contaminated city. No matter what happens,” the mayor said. “I mean, I think if you look at New York or New Orleans, it’ll be months before people look to go back there because of the issue of contamination. We can’t have that in our city. We can’t have ourselves be one of those hotspots.”

Robinson said he was hopeful that a checkpoint recently set up on Interstate 10 would be effective in limiting the spread of COVID-19 from Louisiana, where New Orleans has been particularly hard hit. Already, the mayor has received calls from a Crescent City resident upset with the measure.

“I tried to remind him, this isn’t a hurricane, this is something that you bring with you. And if we go back to the Middle Ages, this is how pandemics spread, it’s people that are contaminated going to another place and bringing it there,” Robinson said. “If the shoe was on the other foot, I’d be here saying to our residences, ‘You can’t go anywhere, stay here, you’e just got to hunker down and we’ve got to fix it here, because you leaving and going somewhere else is only going to spread this even further.”

Although the Pensacola City Council has decided suspend public meetings until at least May, Mayor Robinson said that much of city hall has continued humming — albeit from remotely positioned employees in many cases.

One notable change being instituted involves the city’s Inspection Services department. The city will now be conducting inspections of occupied buildings via video inspections. The inspections will be conducted in coordination with the property owner and involve an online video platform. The department will still personally inspect unoccupied buildings. Also, the city is extending permit expiration dates until after the current State of Emergency is lifted.

At the Pensacola International Airport, the city is stopping its parking shuttle service. With travel down, the shuttle is not needed.

This past weekend, the city of Pensacola conducted a mayoral clean-up day, during which the sanitation department collects waste free of charge. Noting how many people were stuck around the house, Mayor Robinson said the city saw its largest trash haul yet, with 80 tons of bulk waste was collected, as well as 132 tires and 1,120 gallons of paint.

“Obviously you’ve been at home, cleaning out your houses,” he said.

While city parks have remained open, officials have asked that people limit gatherings to less than 10 people. Mayor Robinson said Monday that maintaining that limit was proving challenging.

“I believe it’s critical for our exercise and our health, however, our ability to keep these parks open is contingent on you and your ability to operate [within] what we say,”the mayor said, imploring people again to limit gathering sizes.

Escambia County will consider this week if public beaches on Santa Rosa Island should be reopened to the public. The city of Pensacola’s own beaches — such as Sanders Beach and the bluffs along Scenic Highway — remain open.

Mayor Robinson said that the city was monitoring activity at the bluffs, but that he did not feel the location presented the same challenges as the beach. Whereas the bluffs remain the purview of largely locals, the beach draws out-of-area tourists.