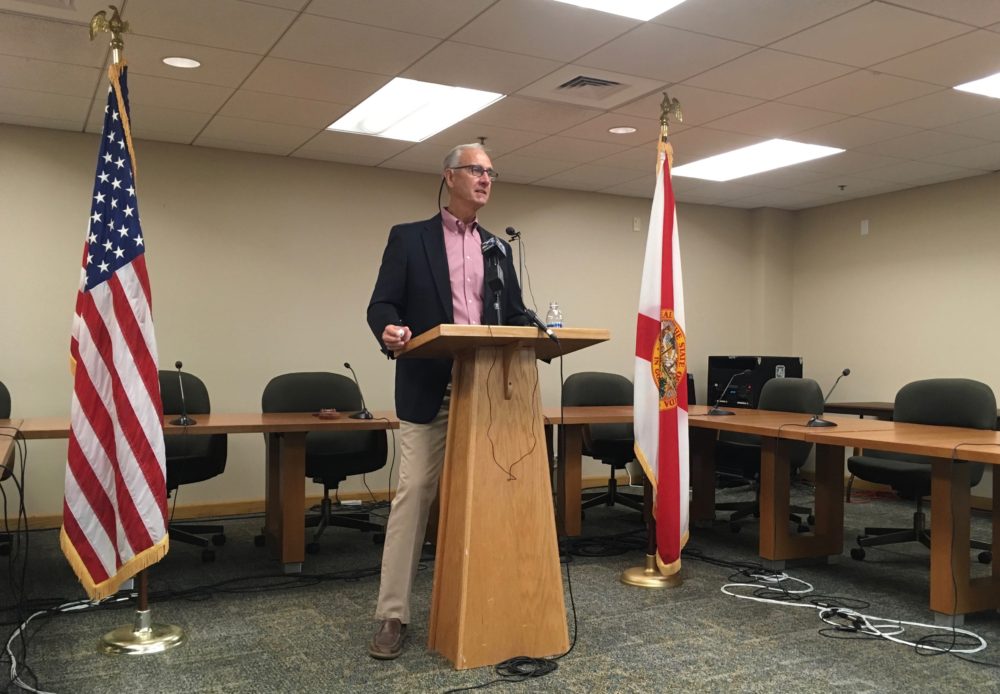 With Pensacola Mayor Grover Robinson out of town, City Administrator Chris Holley fielded the weekly press conference Monday morning. The administrator provided a roundup of city efforts on multiple fronts, speaking specifically about details of the mayor’s proposed 2020 budget as well as about plans to act on the recently received SCAPE plan for downtown.

Fresh from a pair of budget workshops last week, Holley said an important component of the proposed budget are pay increases for city employees. The mayor has proposed average increases of 3 percent, as well as another potential 2 percent merit-based pay increase.

Holley also spoke about putting an end to the city’s practice of keeping administration level employees on a variety of contracts. Going forward, the plan is to have such employees under uniform contracts.

All of this is outlined, the administrator explained, in the new HR manual. The city has been without an active HR manual for a while, and a new one should be unveiled sometime in the next couple of weeks.

“The HR manual is a living document,” Holley said. “It’s never really a 100 percent done, but we’re as close as we can get and I think it’s important that we put it back in place.”

Also outlined in the new HR manual are the prescribed severance packages for various employee levels in the event the at-will employees lose their jobs through no fault of their own — “the more exposed you are to some political realities, the benefits are a little higher” — as well as the process through which a terminated employee can appeal.

“We’re reimplementing that,” Holley said. “There will be a panel to hear grievances and appeals.”

Holley said the city fully intends to act on SCAPE’s plans, though the details are still up in air.

“The whole SCAPE process is now ramping up as a staff effort,” he said. “We’re already getting questions about Hashtag Project and Bruce Beach and the marina and all these things, about how we’re going to do it, and to be honest, we don’t know yet.”

Mayor Robinson, with the support of the Pensacola City Council, recently decided to refinance some city debt and also borrow an additional $17 million, with the goal of funding elements of the SCAPE proposal. Holley said it had not been decided how to prioritize those funds.

The city administrator did say that he felt the plans slated for Cedar Street — which involve minimizing vehicular traffic and focusing on pedestrian activity while using the street to improve downtown connectivity — might be a good starting point.

“The Cedar Street concept is the one I think we should kind of focus on first,” Holley said.

Last week, Public Works Director Derrick Owens provided city council an overview of the city’s stormwater issues. He outlined about $58 million worth of work that needed to be done to improve the stormwater infrastructure.

“Obviously that’s a lot of money and we don’t have that kind of money, so we’re working on how we can finance as much as we can do,” Holley said Monday.

The city administrator said that it had yet to be determined which areas of the city would be tended to first. He did allow that Main Street — a route that has seen much energy and treasure poured into it, as well as stormwater — is a likely candidate to lead the line, and also possibly Langley Avenue.

“We’re having some internal conversations about what the right projects would be,” Holley said.

On Aug. 8, Pensacola City Council will be discussing the possibility of scheduling a joint meeting between city and county officials. Meetings between the mayor and council and county commission have become rare events in recent years, and Holley said he thought reviving such engagements would prove beneficial.

“I’ve got a long list of things that we work on with the county,” he said.

On that list are issues like safety improvements for West Cervantes Street and conducting the census. Also on the list would be continued coordination when it comes to addressing the issue of homelessness, as well as the potential for allowing city employees to make use of the same public health facilities available to county employees.

Holley said he intended to reach out to newly hired County Administrator Janice Gilley and discuss the concept of a joint meeting. He also stressed that before any such meeting occurred, the respective staffs would need to adequately prepare their respective elected officials.

“We’re gonna have the mayor and the chairman in the room, we need to be prepared for that conversation, and certainly if we’re going to have the council and the commission in the room, there should be some good staff work that does into making sure those meetings are productive,” Holley said.