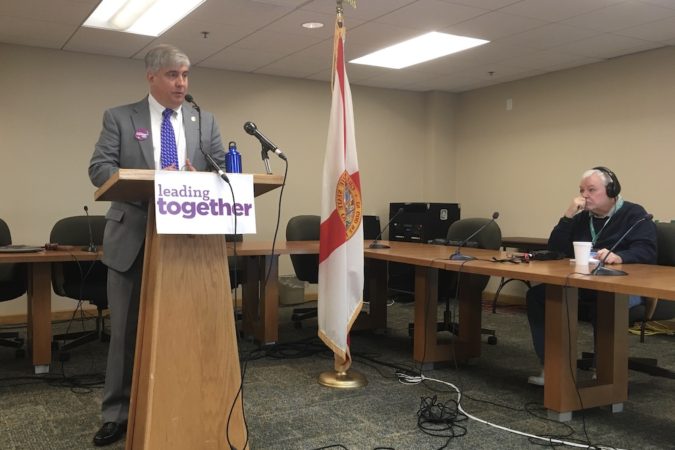 Pensacola Mayor Grover Robinson’s post-Thanksgiving presser highlighted a few news items of local concern — including efforts to curb gun violence and the safety-oriented changes slated for West Cervantes Street — but the centerpiece of Monday’s sit down with the media pertained to the national stage and upcoming 2020 presidential election.

Recently, the mayor attended a National League of Cities conference in Texas, where he joined a the organization’s 2020 Presidential Election Task Force. The task force’s purpose is to encourage presidential candidates to agree to address bipartisan priorities outlined in the League’s Leading Together Cities Agenda.

“If you see my purple pin, this is a bipartisan effort,” Robinson said Monday, pointing out the politically neutral color scheme his lapel pin.

The League’s Leading Together platform consist of four primary priorities that task force members are urging candidates to embrace:

“These are things that I don’t believe are Democrat or Republican,” the mayor said, “they are simply things that communities want and cities want.”

Robinson — a Republican — stressed that partisan politics doesn’t enjoy the outsized consideration at the local level that it receives on the national stage. At the municipal levels, he said, people of whatever political stripe depend on essential services like sanitation and fire protection.

As for issues like homelessness, gun violence, infrastructure and workforce development, the mayor said these also cross over political boundaries. The task force aims to secure commitments from candidates to adopt these priority issues within their first 100 days.

“We hope every candidate will make a commitment on these things and begin to work with cities,” Robinson said. “I think these are all things that anyone would want and I think they’ll make for a better community and a better United States.”

Also included in the League of Cities task force mission is something referred to as “shared values.” These values include respect, partnership, inclusion and accountability. The task force is seeking to have the field of presidential candidates, including the current president, to endorse such values.

The Florida Department of Transportation will be making improvements to West Cervantes Street in an effort to make the road safer for both drivers and pedestrians. The changes, which include slimming lanes, adding sidewalks, crosswalks and street lights, as well as some sections of a median barrier, are being made following years of vehicle-pedestrian accidents along the roadway.

When FDOT unveiled plans for West Cervantes over the summer, the entire stretch included a barrier wall in the median to stop pedestrians from crossing in undesignated areas. The constant wall also limited where drivers could turn off the road.

Pensacola and Escambia County officials, as well as nearby residents and business owners roundly criticized the notion of a median barrier and after some initial hesitation FDOT altered its plans to minimize the wall in favor of landscaping in the median; the agency also agreed to some other changes, such as adding additional street lights to slow traffic.

“I feel like 80 percent of what we asked for in modifications, we got,” Mayor Robinson said fo the revised road plans.

FDOT will host a public meeting Dec. 10, during which the people can submit input regarding the revised plans.

While local officials were somewhat successful in getting FDOT to back off its all-wall concept, the barrier will remain on some portions of West Cervantes. One such area is near N Street, where the state had identified a number of pedestrian-vehicle conflicts over the years.

“There were about seven or eight red dots, which were pedestrians being hit,” Robinson said. “So, the first time we met we said, ‘We get it, we understand that’s a problem area.’”

Elsewhere, however, the median will feature planters or landscaping.

“Much like what you see on Bayfront or on Main Street,” the mayor offered a reference point.