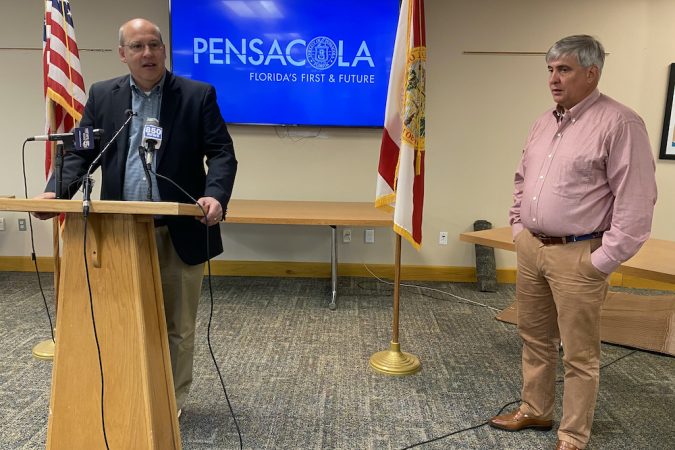 “Mardi Gras is always one of my favorite times,” the mayor said Monday during his weekly press conference. “I think we do it right — certainly, I think, the best and oldest celebration of Mardi Gras in the state of Florida. I think probably one of the third best right after New Orleans and Mobile, probably in the country.”

On Saturday, Mayor Robinson rode on a fire truck in the afternoon parade, throwing beads to attendees — “It’s hard to throw all the beads as fast as we can” — and taking in the crowd downtown, where he said he thought things couldn’t have looked more amazing.”

“It was just amazing to me,” Robinson said of the number of people watching the parade, which itself had a reported 6,000 participants. “I mean, everywhere I saw people. I’d never seen so many people at a parade. South of Garden, it was 15 to 20 people deep off the road.”

Joining Mayor Robinson for his presser this week was University of West Florida Athletics Director Dave Scott. He broke the news that UWF football will not be returning to Maritime Park’s Wahoos Stadium next season. Instead, the Argos will be playing on campus at their home Penn Air Field.

“It’s just a great venue and environment there,” Scott said of Wahoos stadium downtown, “but part of starting football at UWF was about enhancing student life, and we’re ready to create that opportunity on campus.”

UWF’s football team has played its first five seasons in downtown Pensacola. Mayor Robinson said the team’s presence has been a welcome addition, however brief — “We certainly enjoyed hosting downtown” — and nodded toward a major driver of the move: a later baseball season for the Wahoos.

“We knew this day was coming at some point, although it may have come a little faster than we thought,” Robinson said, referencing how Major League Baseball’s recent takeover of Minor League Baseball resulted in a later season for the Wahoos, and thus scheduling conflicts with UWF games.

Scott said that in addition to challenges presented by the Wahoos’ later season, another factor that played into UWF’s decision to move games onto campus included a switch to artificial turf at Wahoos Stadium. Also, he stressed, on-campus games will better foster an enhance collegiate environment for students.

“All those things combined just seem to make it the right time to make a move and our students are excited about it,” Scott said.

UWF has played a pilot game at Penn Air Field already, which was attended by a reported 5,000 fans. By next season, the field will be sporting additional infrastructure to accommodate its the team’s fans.

“Obviously we’re going to have some bleacher structures to enhance the field for this fall — we’ll look to do that — and as we moving forward into the future we’ll look to add things permanent as we go,” Scott said.

No Camping Near Tracks

With the homeless camp beneath the I-110 overpass cleared out, some individuals in recent weeks have taken up camping on a spit of land near the railroad track near Graffiti Bridge, where Bayou Texar meets Pensacola Bay.

“We certainly don’t believe that’s an area, it has certain things — you’ve gotta trespass the railroad tracks to get there and, in fact, it should be a nice part of several things that we think are kinda seeing a rebirth and a reemergence of several things in Bayou Texar, we’d love to see it continue to be environmentally pristine in that location, so we’ll be working with that, but we’re still trying to relocate a number of people,” Robinson said.

The mayor mentioned that soon the city hopes to have additional shelter option to which to direct people, with organizations such as Brightbridge and REAP working to develop such shelters using federal funds provided through the city.

“So, we do expect us to have better places that we can continue to manage those who are homeless and find opportunities and programs for them to be helped,” Robinson said.