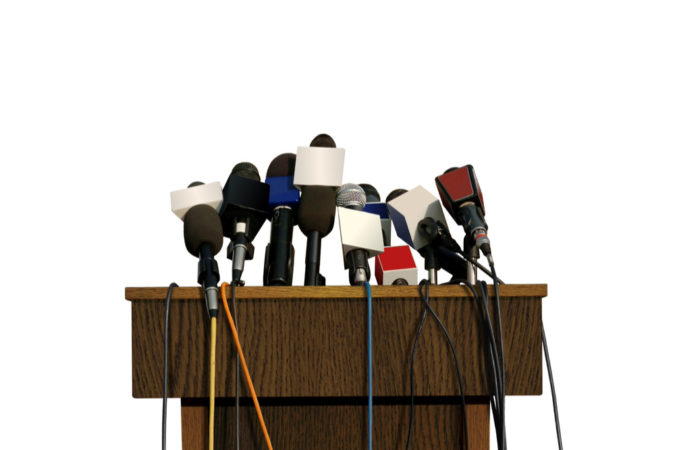 In the wake of Hurricane Sally, various city of Pensacola departments, like Parks and Rec or Sanitation, have been kept busy with recovery efforts. And they’ve made quite an impression on Mayor Grover Robinson.

“I had a dream Saturday night where John Pittman called and asked me to drive a garbage truck — and I was driving a garbage truck,” said Robinson during his weekly press conference Monday morning.

The mayor said that one of the biggest tasks facing the city is collecting yard debris. There’s an estimated 284,000 cubic yards of total yard debris out there and so far the city has collected 59,433 cubic yards, or 1,356 truck loads.

The yard debris the city collects is being taken to a processing area on the northwest side of Pensacola International Airport. The city is shredding the debris, and intends to use it as ground cover, or possibly burn it.

In addition to discussing clean-up efforts during Monday’s presser, the mayor also addressed Gov. Ron DeSantis’s decision to proceed with Florida’s reopening and what that means for Pensacola’s mask order, as well as an interesting opportunity he’d like to explore while the Pensacola Bay bridge is out of commission.

All Masked Up and Florida’s a-Go
Last Friday, Gov. DeSantis moved Florida into phase 3 of its pandemic reopening process, which essentially means businesses like restaurants can fully open. The executive order the governor signed also did something else: let municipalities know they would not be able to levy fines or penalties for people running afoul of local mask ordinances.

This means that the city of Pensacola’s order mandating the wearing of masks in public businesses is essentially not enforceable.

“The governor makes the decisions he makes and we try to comply with them,” Robinson said.

Last week, the mayor asked the Pensacola City Council to repeal the city’s mask order now that COVID-related hospitalizations have decrease, but council members declined. Robinson said he was now unsure how the city would be treating its mask mandate.

Bridging Crisis to Opportunity
When Hurricane Sally sent a barge smashing into the bay bridge, the resulting damage, expecting to take the bridge out of commission for months, may have created an opportunity for the city of Pensacola.

“When you get lemons you try to make lemonade,” Mayor Robinson said.

The mayor laid out a concept Monday that involves closing a stretch of Bayfront Parkway to vehicular traffic in order to open the area to pedestrians.

“It’s a great venue for getting out and walking around, getting on the waterfront,” Mayor Robinson said of the stretch of road, which typically sees traffic heading off the bridge.

The area Mayor Robinson would like to see closed to traffic is in the proximity of Seville Square. He likened the experiment to a past Ciclovia event, during which Palafox is closed to traffic and sees an uptick in pedestrians and street-dining.

“I think it could be a real draw,” Robinson said. “When you do have lemons, you’ve got to figure out how to use them.”

Shipwrecked
Over the weekend, Mayor Robinson observed a couple of tug boats trying to drag one of Skanska’s beached barges back into the water to no avail. He said he didn’t know how the barges would eventually be dealt with.

“We’re still a little bit unsure how that’s gonna work,” the mayor said. “I’m not sure what’s going to happen to the barges or how they’re going to get recovered.”

Robinson said the city was also still trying to figure out how to deal with other, albeit much smaller, ships that were washed ashore by Hurricane Sally. That task, he said, was a bit farther down of the city’s post-storm priority list.

“Ultimately, one way or the other, we’ll figure out how to get these addressed,” Robinson said.

Homegrown Example
In new legislation being proposed at the state level, Gov. DeSantis is targeting protest organizers, saying they should be held legally accountable if protests turn violent or lead to property damage. The governor in particular has targeted the act of blocking a roadway in protest, and has also proposed offering drivers fleeing protesters added protections.

Last summer, Mayor Robinson was involved in an event that featured both a road blockage protest, as well as a driver proceeding through the group of protesters. The road block tactic led to a discussion with the mayor, during which he committed to appointing a member of Dream Defenders to the city’s Citizen Police Advisory Committee, and the driver of the vehicle that drove through the road blockade ended up ferrying a protester on his hood across the bay bridge.

On Monday, Robinson said that the entire episode didn’t need to have happened, and said that he thought moving forward, less dramatic discussion between officials and citizens would be facilitated.

“My hope is that you’re going to see us focused on changes and not destruction,” the mayor said.