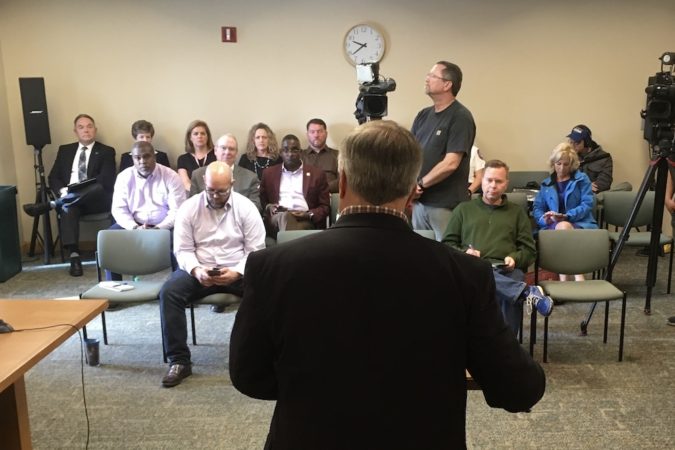 In the wake of last week’s shooting at Naval Air Station Pensacola, Mayor Grover Robinson began his weekly press conference Monday morning with a moment of silence for the victims, before thanking area residents for their own heartfelt response — vigils, prayers, blood donations — to the attack.

“I think that says who we are as a community in Pensacola,” Mayor Robinson said.

Immediately following the NAS attack, during which a pilot in the Royal Saudi Air Force, who was participating in a training program at the base, killed three people and wounded eight others before he was shot and killed, Mayor Robinson said that Pensacola was instrumental in providing SWAT teams to participate in the response. He noted that relationships recently forged with state and federal law enforcement agencies through participation in a joint gun-violence task force proved beneficial in coordination efforts.

“It helped make it very smooth as we obtained assignments,” he said.

“The spirit of those that we visited was truly unbelievable to me,” the mayor said, mentioning specifically Charles Hogue, an NAS Pensacola police officer who was wounded in the shooting. “The man had just been shot twice through the leg, he immediately stood up and wanted to be standing the whole time we were there with Sen. Scott.”

The mayor also responded to a question concerning the shooter’s ability to legally purchase the handgun used in the attack — a 9 mm Glock 45 — in the state of Florida. He said he had spoken to local legislators and expected that actions would be taken at the federal level to address aspects of the law that allow for non-citizens such as the visiting Saudi pilot to purchase guns.

“We obviously believe that a couple of things will need to be reevaluated,” Robinson said. “I think we may have to look at some of these laws after both the Pearl Harbor and the Pensacola NAS shooting. I believe we absolutely have to reevaluate these laws.”

The mayor went on to stress the city’s support of efforts at NAS Pensacola to train ally pilots, but also said participants should be better vetted going forward.

“We want to have our allies here, we have no problem with allies — we have allies from Europe, Asia and the Middle East — and we are supportive of all those allies,” Robinson said. “But we obviously want them to vet who comes here.”

And finally, the mayor, reflecting on a conversation he had with his priest, drew a distinction between “Islamic extremists” and the Muslim faith in general.

“I want to be clear,” the mayor said, “we have many Islamic countries that are our allies. We don’t seem to be having problems with them, it seems to be one particular group that we can’t seem to figure out who are friends and who are foes, but there are Muslims that are Americans here that are just as much touched and hurt by this.”

Robinson also relayed a message from the Islamic Center of Northwest Florida, reading from a prepared statement provided by the group: “The Muslim community of Pensacola was deeply saddened and horrified by the senseless shooting at Pensacola Naval Air Station on Friday morning. We stand alongside our fellow Floridians in mourning and pray for all those affected by these irrational acts of violence against the Navy base’s here and in here Hawaii. We offer our heartfelt condolences to the victims and their families, may God grant you peace and ease in your hardship and suffering.”

In addition to discussing matters related to the NAS Pensacola shooting, Monday’s presser also included comments regarding a cyber attack on city services over the weekend, as well as more mundane items, such as city staffing developments, a proposed memorial for women veterans, the approaching deadline for the city’s resident-satisfaction survey and the arrival of the resident America’s Cup team’s new boat.

With the departure of former city administrator Chris Holley this month, Mayor Robinson had a couple of new staffing announcements lined up for Monday. The mayor has shuffled Keith Wilkins, formerly an assistant administrator, into the top admin slot and intends to move Chief Financial Officer Dick Barker over to the vacated assistant position; in turn, Amy Lovoy, Barker’s recently hired assistant, is expected to step into the CFO position.

“We’re excited to have Dick up on the seventh floor,” Robinson said. “Having the opening up there allowed us to work with Dick and keep his expertise. He has a number of understandings of the city and how things work, and he’s still got a couple of years before he DROPs, as well, so we would love to pull him up here and work with him.”

Both Barker and Wilkins are in the DROP retirement program, meaning they have a limited window of time left on their employment clocks.

“At the end of your five years you’re gone, you have to leave,” the mayor said, explaining the DROP system, in which an employee is able to start collecting some retirement benefits while also continuing to work.

“Currently I’m in the FRS program and my date for retirement is December 2023, is what I’m looking at,” Barker explained. “Keith just went in. Keith probably has about four years if he wants it.”

Mayor Robinson had previously said that both Barker and Wilkins were expected to soon retire, but in more recent discussions they agreed to stay on a bit longer. Wilkins, the mayor said, has agreed to stay until at least December 2021.

While Wilkins has already assumed the administrator position — “We’re happy to have him, even though his first day has been a cyber attack,” the mayor said — both Barker and Lovoy must be approved by the Pensacola City Council. The mayor said that Barker will remain CFO through March, at which time both he and Lovoy will take on their new respective roles at city hall. Barker’s purview will consists of sanitation, the port and airport, as well as Pensacola Energy and special projects.

Mayor Robinson said that the city is currently working with the Monument for Women Veterans group toward securing a site for a local monument. A lease for the property at the unused Amtrak station is currently being negotiated.

“They are the first in line to get the lease,”the mayor said, adding that he was announcing the effort in order to allow the Monument for Women Veterans group to begin fundraising efforts.

The mayor said that any lease agreement will include a provision allowing for Amtrak service to return to Pensacola and use the facility.

“There’s an ability for us to still have an operating train station if Amtrak returns back to Pensacola,” Robinson said. “But, right now the building has been sitting there, it’s been deteriorating, and we’re excited to try to get the Monument to Women Veterans here and looking forward to what they can do with their monument.”

Also on Monday, Mayor Robinson welcomed the America’s Cup American Magic sailing team back to the Port of Pensacola. The team is using the area as a training ground in preparation for competition next year.

The American Magic is back. If you haven’t noticed, it was back last week. It began sailing the Mule,” Robinson said, adding that the team has now brought its flagship vessel to town. “They returned here in November with the Mule, but we’re excited to have the full-size 75-foot Defiant here training in Pensacola.”

“You probably see them out in the bay and it’s exciting to have them back at the port,” Robinson said.