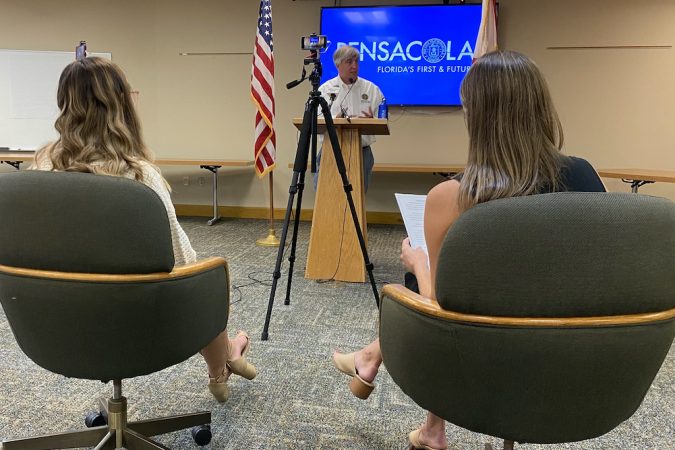 With a stretch of wet weather moving through the region, Pensacola Mayor Grover Robinson said city streets were looking good thus far, though he cautioned there could be some flooding ahead.

“We’ll be watching the rainfall closely over the next few two days,” the mayor said, slipping into his regular Monday morning press conference.

Before addressing several items of interest — including drunken scooter stunts — Robinson also made a couple of announcements during the presser. First, ECUA’s recycling operation, damaged in a fire in July, is soon to return, which means recyclables collected by the city sanitation department will once again be recycled instead of taken to the landfill with the regular garbage.

“You need to get back to doing the right thing with your collections and putting them in the right can,” Mayor Robinson said, reminding city residents to begin separating recyclables again by next week’s trash days.

Secondly, Robinson announced an upcoming mayoral town hall. The town hall is scheduled for Oct. 19 at 5:30 p.m. at the Woodlands Heights Community Center.

“As we see COVID numbers continue to decline, we thought this would be a good time for us. We haven’t done one in a while,” Mayor Robinson said, explaining that the event was being planned in what appears to be a COVID “lull.” “I’m looking forward to getting back out, face-to-face with citizens.”

Out of the Box, But No

In September, the Pensacola City Council heard a pitch from local developers Carson Lovell Company regarding plans for two parcels at the Community Maritime Park. On Monday, Mayor Robinson produced a Memorandum of Understanding (MOU) outlining a potential contract with the company and said he would recommend that the city council reject it.

“Most, if not all, of the council members stated they were only interested in moving forward if the development proposal ultimately made financial sense for the city,” Robinson said, explaining that the proposal did not meet that bar: “I do not think the city is in the position where it needs subsidize further development.”

The city has had a few offers for parcels 4 & 5 at Maritime. The other proposals are similar to Carson Lovell’s in that most include a parking garage (a near prerequisite for any development on the property). The previous proposals differ in that they were primarily privately funded.

Mayor Robinson said that he could appreciate the group’s proposal, which includes developing a convention center and retail and residential spaces in addition to the parking garage. But, what he said the city could not entertain was the lack of funding source for the project: “We have no funding source, no anything at this particular time and again, this will be something that will be purely on the back of the taxpayers.”

“We just don’t think it’s consistent with what’s been there,” Robinson said, “but we understand and appreciate thinking outside the box.”

If the city council does decide to move forward with the Carson Lovell proposal, the company will have 180 days to perform due diligence, which will include a feasibility study and market analysis. Whether the city actually puts a shovel in the ground, it will owe Carson Lovell $100,000 for their services.

Since last fall, when Hurricane Sally blew through town and caused considerable damage, the city of Pensacola has been working with the Federal Emergency Management Agency to secure funding to make needed repairs to damaged areas. Monday, Mayor Robinson provided a progress report on that effort and said that most of the associated projects would be completed by the spring of 2022.

“I think you’ll see it back open by the time we’re all ready to get back out and see good weather,” the mayor said.

In total, Robinson said there was more than $20 million worth of damage to address.

Projects awaiting FEMA approval include repairs at Plaza De Luna, with approval expected in November; boardwalk repairs at Sanders Beach; and repairs at Wayside Park, for which the city is currently coordinating funding.

Mayor Robinson asked for patience when it comes to these repairs, and apologized for city parks having been left wanting for so long.

“We obviously realize they’re not what you’d want them to be, but we’re asking you to please work with us and be patient while we get those things operated,” Robinson said.

The city of Pensacola has recently begun allowing the rental of Bird scooters in certain areas. As is the case in numerous locales, the scooters serve as temporary transportation and are meant to be abandoned and taken up by the next rider.

When first talking to various companies about operating such a business in the city, Mayor Robinson recounted Monday, one of the representatives mentioned that they would shut the scooters off at 10 p.m.

“I was kind of like, ‘Why would you do that? People still need to go home,’” Robinson said, before answering his own question: “If you’re on a scooter past 10 o’clock, you’re probably impaired.”

Apparently, this has been the case locally. The mayor said that there had been several incidents attributed to people using the scooters impaired.

The mayor said that the city would likely incorporate a shut-off time into the scooter contract to better avoid such instances.