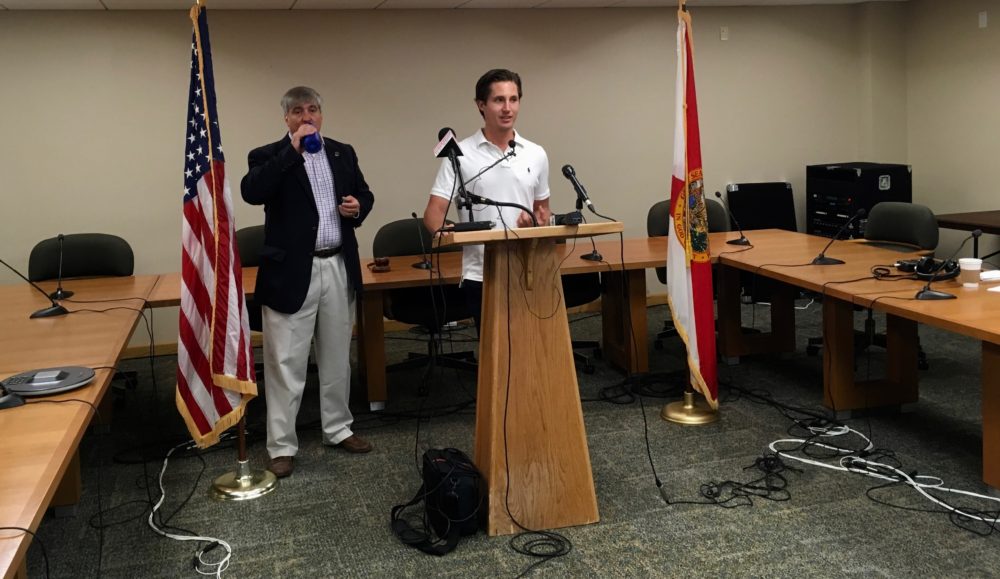 While the skatepark planned for downtown Pensacola is still at least a year away from becoming a reality, skateboarders will have something to skate on sooner rather than later at the future site of the park.

Pensacola Mayor Grover Robinson had local skater and Upward Intuition founder Jon Shell join him for Monday’s press conference to help share the news of the “skate spots” that will be scattered about the as-yet-undeveloped Hollice T. Williams Park.

“Should be skating those sometime in the fall,” Shell said.

In addition to the skate-spot announcement, Mayor Robinson also addressed a few other items of interest during his weekly press conference. During his two week vacation, various developments had occurred within the city. Like the new legal developments relevant to the city’s Bayview Cross court case. Or Baptist Hospital’s announcement that it’s planning to move from its current E Street campus, leaving a rather large geographic question mark in the area.

The city has plans to construct the Blake Doyle Skate Park on the southern end of Hollice T. Williams Park. The skatepark project is the brainchild of Shell — so-named in memoriam of his friend — and was handed off to the city last year after some initial fundraising.

The skatepark is being constructed in tandem with a larger stormwater and park-improvement project being done by Escambia County. It will be at least another year before any of the skatepark elements can be put in to the park, located underneath I-110.

In the interim, Mayor Robinson and Shell announced Monday, the city will be installing concrete ‘skate spots’ in the area. The city is also partnering with the Institute of Human and Machine Cognition to add an educational element to the skate-spot installations.

“These skate spots will include not only a safe area for our skate community, but they will also create interactive locations that will serve as building blocks for STEM and STEAM learning,” said Robinson.

These skate-spots, Shell explained, will be made from large concrete slabs that act to replicate the natural-urban environs skaters seek out.

“They like to find obstacles that challenge them in the streets,” he said. “Ledges, stairs, rails and things like that. Banks. So, when you look at it, it’s not going to look like a skatepark, like it was designed or built to skate, but it happens to be a perfect obstacle that challenges skateboarders.”

The large concrete slabs, Shell said, are coming from the Alabama-based concrete company currently working on the federal courthouse downtown.

“They’re doing the federal courthouse downtown, so they have these 20, 30, 40-foot pieces of structural concrete, many of which end up as reject pieces, so they’re going to gift the city some of these reject pieces and we’ll be able to use those for skate spots,” Shell explained.

Parks and Recreation Director Brian Cooper explained that the company had committed to providing eight such concrete slabs, and about half would be going in near the site of the skatepark.

“We plan on putting three or four of them at Hollice Williams,” Cooper said, “and then eventually finding other locations to put one here, one there so skateboarders around the whole city can find a location where they can hit a spot.”

Shell said that the donated pieces were ideal for repurposing into skatable structures.

“What’s cool is that many of the pieces are nice architectural pieces,” he said. “I think we can make it beautiful. So, you’ll be able to be skating through — kickflip, backside, tailside, shove-it —

“I will not be trying that,” the mayor laughed.

While the skate-spot installations may change to accommodate the park when constructed, they will ultimately remain and be a permanent feature of the larger park-area, serving as a gateway of sorts to the skatepark.

Although no one from IHMC was on hand to elaborate on the project’s educational component, Shell said that there would be a component designed to analyze stormwater data, and the city issued a press release describing “interactive learning labs” built around the concept of skateboarding.

The city’s concrete slab skate spots are expected to be installed and skatable by this fall.

Last week, Baptist Health Care unveiled plans to move to the corner of Brent Lane and I-110. The move, expected to be complete by 2023, will mean a change for the organization’s current E Street campus.

Mayor Robinson said that he had spoken with Baptist CEO Mark Faulkner while on vacation, and planned to meet with him again this week. The mayor said he saw the development as offering “all kinds of opportunities” and perhaps the “shot in the arm that the westside needs as we move forward.”

“You know, I thought about it for a while, and I think there’s opportunity,” Robinson said.

“I do not see this as a lemon, I see this as lemonade. You’re about to have a major facility on the westside become available for repurposing.”

The mayor said that Baptist’s current facility could make for a good teaching hospital. Or an expansion site for something like Lakeview Center. He said that the area could potentially serve as an “impetus and a catalyst” for the entire area: “I think the sky’s the limit …”

“The opportunities for us are limitless, it’s whatever we decide and begin to look at,” Robinson said.

Feeling Good About the Cross Case

Following the U.S. Supreme Court’s recent decision that a 40-foot tall cross on government property in Bladensburg, Maryland doesn’t violate the First Amendment’s no-establishment clause, the city of Pensacola is hoping it may find success with its own legal case concerning the cross located at Bayview Park.

In the city of Pensacola’s case concerning the cross located at Bayview — Kondrat’yev v. City of Pensacola — a federal appeals court had ruled that the cross did violate the First Amendment and must come down. The case has now been sent back to a lower court for reconsideration in light of the Bladensburg ruling.

“We feel very optimistic that that bodes well for our case,” Mayor Robinson said. “Our case is obviously very similar to the Maryland case. So, we are encouraged.”

Robinson said that the city would have challenged the order to remove the cross regardless, based both on principal and economics.