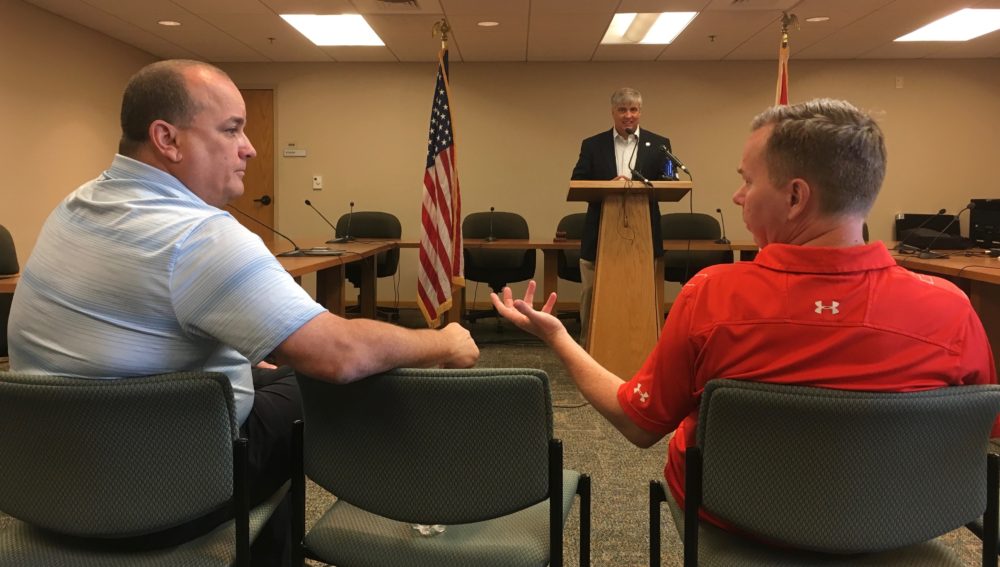 During his weekly press conference Monday morning, Pensacola Mayor Grover Robinson addressed issues ranging from tragic to mundane to bizarre. In addition to summarizing upcoming infrastructure projects, there was the fatal shooting of a citizen by a member of the Pensacola Police Department on Friday, and also satanists volunteering to clean up a city park.

On Friday, Pensacola Police tried to pull a driver over after smelling marijuana coming from inside his car. The man didn’t stop, but instead led the police on a slow-speed chase to his house, where the police ultimately shot him dead.

“It is regrettable whenever anything like this happens,” Mayor Robinson said Monday, explaining that the incident is currently being investigated by the Florida Department of Law Enforcement, as is standard in such cases. “The good news is that everything was on body camera. Both, it’s my understanding, the chase and the scenes that happened.”

In statements following the incident, the police department has said the man — not yet officially identified — got into a fight with officers and eventually disarmed one of the officers. At that point, another officer apparently shot the man.

Neighbors who claim to have witnessed the incident have painted a different picture in media reports. The victim’s girlfriend reported to WEAR 3 that her boyfriend had his hands up when four officers began punching and tasing him as his child looked on from the front porch.

Mayor Robinson said he did not know many of the details surrounding the shooting. He has yet to see the footage from police camera. He doesn’t know the experience levels of the officers involved. He isn’t aware if the weapon the victim reportedly wrested from the officers was a firearm or a taser.

“At this time all I know is the same thing that I’m hearing from you, that I’ve heard and read in the paper and other stuff, but at this particular time I think all that will have to come out when it comes out with the investigation,” Robinson said.

Shortly after the shooting happened Friday, the mayor went to the scene of the incident. Along with City Councilwoman Jewell Cannada-Wynn and Escambia County Commission Chairman Lumon May, Robinson spoke with both law enforcement and neighborhood residents.

“Obviously, I knew people were going to be upset, so I was there,” the mayor said.

Robinson recounted how residents expressed concerns over the police shooting — “they were upset, they didn’t understand why it happened” — and how he assured them the incident would be investigated by FDLE.

“There was a lot of concern and, I guess, anger and upset about what happened, we certainly indicated we understood and that there was going to be an investigation,” he said. “I assured them that this was the last thing we want to see happen too, so we’re going to first let the investigation play out, find out what is done there, and then after that, if there are things we have to learn from it, we will take that and learn from it and do whatever else. We’ll make sure that just like justice happens for all of us, that also the law is under that same provision.”

Welcome to the Neighborhood

The city has hired Lawrence Powell as its new neighborhood administrator. Mayor Robinson said Monday that the position is designed to facilitate better relationships between neighborhoods and the city.

“We would like a liaison dealing with issues,” Robinson said, explaining that the neighborhood administrator will be acting as a go-between of sort between neighborhoods and the city’s various departments. “Dealing with communities and trying to figure out how we can deliver better services and do better things.”

Powell, who ran for mayor in 2018, is the pastor of the Christ Our Redeemer Eternally Ministries. He also formed Future Leaders of Warrington and co-founded Iron Sharpens Academy for Boys.

Mayor Robinson said it was Powell’s activeness in the City Neighborhood Association Presidents of Pensacola (CNAPP) that he felt would be particularly valuable in his new job. While Powell doesn’t officially start work until July 15, he was also among those making a trip to the scene of the police shooting Friday.

“He was there on Friday to be in that neighborhood as well,” the mayor said.

This week the city of Pensacola will formally begin a conversation about the prospects of turning Martin Luther King, Jr., Drive and Davis Highway near downtown — currently one-way streets — into two-way affairs. The topic will be discussed Wednesday during a meeting of the Eastside Redevelopment Board.

Mayor Robinson said he’s looking to this week’s meeting for a read on how much community support there is for such a change.

“I think that’s where it starts,” Robinson said, adding that he’s looking for the effort to be “citizen driven” and views buy-in from residents living near the streets as essential.

The mayor has previously described the possibility of two-laning the pair of roads as a catalyst for positive road-related changes — slowing traffic, for example — in the neighborhood.

“The purpose of those one-way streets is to move other people that don’t live in that community through that community. The best way to reroute some of that traffic, slow it down or do anything is to try to make it two-way,” he said. “I think if we could do that, I think it would change some of the traffic dynamics in that area.”

Satanists Must Choose Another Park

The West Florida Chapter of the Satanic Temple recently volunteered to clean Hitzman Park. A sign denoting such was posted at the park, located off of Langley Avenue.

But Mayor Robinson said on Monday that the group will need to choose another city park to clean, as Hitzman is not on the list of parks available for volunteer clean-ups.

“He can choose another one of the 53 parks, but Hitzman is not one of them,” Robinson said, referring to the David Suhor, the group’s point-person, who is also involved in a lawsuit seeking for the city to remove a large cross at Bayview Park; that court case is currently being reassessed in light of a recent U.S. Supreme Court decision.

Brian Cooper, the city’s director of Parks and Recreation, explained that city parks are either cleaned by city staff or are kept clean by volunteers. The city has an agreement with the non-profit Keep Pensacola Beautiful to handle the volunteer assignments, but only some parks are available for such volunteer clean-ups.

“Keep Pensacola Beautiful accidentally gave them a park that wasn’t on the list,” Cooper said. “It’s too big of a park for one small group to manage.”

Cooper said that city staff typically takes care of larger parks or parks featuring athletic fields or community centers. Smaller community parks are left for volunteers to handle. He said that there were currently other, volunteer-applicable parks available.

Mayor Robinson said he thought it was interesting that Suhor would have signage posted which nodded towards satanists, while at the same time arguing that a cross should be removed from Bayview because of its religious connotations.

“I certainly believe that this sudden spirit of volunteer generosity is probably driven by desires to do something with the court case coming up. I find the timing oddly coincidental,” Robinson said.