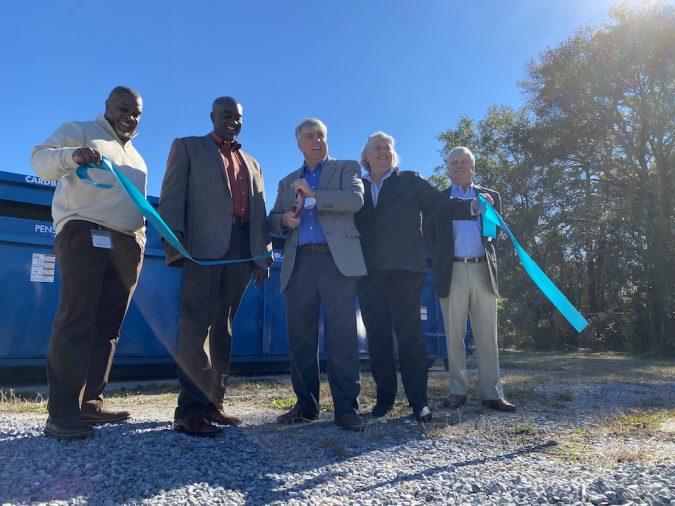 “We are really excited,” said John Pittman, who oversees the city’s sanitation department. “I think it’s about time for us to go to the next level when it comes to recycling.”

Behind Pittman were three sizeable blue recycling containers. The containers constitute the city’s recycling center, which just reopened on Summit next to Fire Station 3.

“I think people, this time of year, have an over-abundance of packaging,” said Mayor Robinson, noting that the center was reopening in time for the holiday uptick in cardboard recyclables.

The re-opened recycling center will be open 24 hours a day and accept the same materials residents place in their curbside recycling containers. Two of the site containers are designated for cardboard, while the third is available for other items, including glass, plastic and paper. Items not permitted in any of the recycling containers include Styrofoam, electronics or household waste.

Both Pittman and the mayor pointed out the site’s security camera, explaining it was meant to deter illegal dumping.

“We’re gonna make sure that we recycle, but recycle in the right way,” Pittman said.

In addition to reopening the Summit Boulevard recycling center — with other locations to follow — the sanitation department has also initiated other recent service updates. Amy Miller, who oversees all of the city’s enterprise operations, attributed this to Pittman’s innovative two-year tenure.

“Sometimes good things come by bringing in fresh ideas, fresh energy,” Miller said, crediting the sanitation director with initiating a switch to collecting trash and recyclables on the same day, as well as the offering of an add-on, container-to-door option for residents. “Sometimes it kind of hard to hold him down because we can’t do it all at one time.”

Whereas Miller attributed the sanitation innovations to new leadership, she said the converse was true with Pensacola Energy, where long-time head Don Suarez continues to lead the enterprise.

“Sometimes a department can really benefit from that steady leadership, that calm hand of someone that’s been around for a while and knows how things work,” Miller said.

“Sometimes God is good, and he delivers a little cold air for you on these November days,” he said. “Pensacola Energy is really having a good season, as it typically does if it gets a little colder in the winter.”

Suarez reported a general favorable forecasts for the city’s natural-gas arm. The company is adding about a thousand new customers each year, and next year it plan to onboard a biggie: International Paper.

“It’s not often that a gas utility gets to add a major industrial customer like that,” Suarez said, explaining that the addition of IP will increase the company’s revenue by 14 percent.

Also on the Pensacola Energy front, the company is entering into a five-year contract with BP to purchase Carbon Offset Natural Gas.

“Basically it’s traditional molecules of natural gas that are matched with set-aside forest land, dedicated forest land, so that those trees absorb the carbon dioxide that the natural gas will emit when it’s burned. So, it’s carbon neutral. That’s the intent of the carbon-offset natural gas,” explained Suarez.

To clarify, Pensacola Energy will be purchasing land via BP with the intent that the trees on the land will not be cut.

“Yeah, it’s a new concept,” Suarez said, adding that the set-aside land would be verified. “There are independent auditors that verify that the forest land is assigned to our gas supply.”

Suarez acknowledged that the arrangement could potentially be ripe for a ripoff — pointing to the 5-year contract as a period designed to “see just how accurate that verification is” — but said he felt pretty comfortable with BP.

“The carbon-offset natural gas cost about, round-figures, 10 percent more,” he said, adding that the city is offsetting much of that increase through a bond-centric purchasing mechanism available only to municipalities. “It’s not quite 46 cents, it’s around 30 cents, but it offsets most of that premium.”