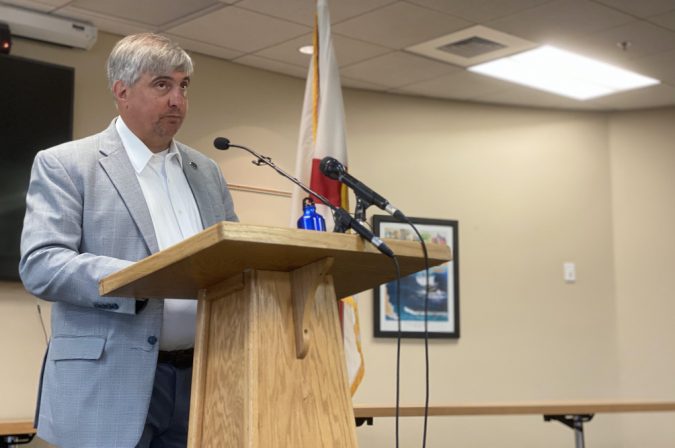 “Really had a great time in the desert, the Southwest,” Robinson said. “I can see why Jesus went to the desert for Lent; there are incredible sunsets and sunrises. In fact, I saw seven straight sunrises, which I have never done before. But it was simply that amazing in the desert.”

During his travels, the mayor found himself on a plane with Gay Nord, CEO of West Florida Hospital, where the two discussed the evolving coronavirus landscape and how it appeared the country and the local region were “getting a handle on this virus.”

In particular, Mayor Robinson cited a lowered test positivity rate of 3.85 percent and a decrease in the number of COVID-related hospitalizations, which has fallen below 30 individuals.

Robinson said that he expected the COVID metric to continue to improve as the vaccine becomes more widely available and cautioned the continued observance of safety measures, such as wearing a mask and frequent hand washing.

“This virus isn’t going anywhere,” he said. “You need to continue to think about what you’re doing, how you do it, and what you do.”

The city conducted a gun buyback this past weekend, with the event lasting only 30 minutes because the $10,000 allotted for the program was quickly exhausted. Mayor Robinson said that he didn’t know if the event actually resulted in lessening gun violence in the area.

“I don’t expect the gun buyback to change what’s happening one way or another,” he said.

Instead, Robinson said he viewed the buyback — an effort of District 7 Councilman Delarian Wiggins —as a way to connect with the district’s residents.

“That’s how we define success,” he said, describing the buyback in terms of a community relations exercise.

Following the gun buyback, some people on social media have raised questions about the types of guns the city bought from individuals. Mayor Robinson said he wasn’t aware of the haul’s breakdown.

“Were some of them not the best quality? I have no idea,” he said, also clarifying that the city had not purchased any homemade air-guns, as some had contended on social media.

City Public Information Officer Kaycee Lagarde later sent out a rundown of the guns purchased by the Pensacola Police Department during the buyback. A total of 71 guns were bought, with 23 of those being long guns and the rest handguns. The city paid the pre-advertised rates of $125 for revolvers and shotguns, $150 for semi-automatic handguns and $200 for semi-automatic rifles.  Note: Inweekly obtained the list of guns purchased – Gun List.

At the end of this month, the Pensacola Citizen Police Advisory Committee will submit its report of recommendations to Mayor Robinson, and … that’s it. The end of CPAC is near.

“I think they’ve served their purpose,” the mayor said. “They were asked to get a report together. They got a report.”

CPAC was convened following the July 2019 killing of Tymar Crawford, a local Black man, by a former PPD detective during a traffic stop. The committee, designed to explore ways to improve the relationship between law enforcement and the community it serves, was prescribed by a grand jury.

Some members of CPAC have indicated that they feel the committee needs to continue to function beyond its final report due at the end of the month. Mayor Robinson clarified Monday that he feels differently, contending that the grand jury didn’t specify how long such a committee should exist.

“It didn’t say it was a permanent committee,” Robinson said. “We tried it.”

In addition to noting the recent passing of one former city councilman,  Cecil T. Hunter, Mayor Robinson also said Monday that he’d like to honor another former councilman, P.C. Wu. The mayor said he would like to name council chambers at Pensacola City Hall in honor of Wu, who served multiple terms until he was unseated this past November.

Robinson said he thought the designation would honor Wu and serve as a nod to the area’s Asian American community.

“He has been our only Asian American council member,” the mayor noted.

1 thought on “Presser Notes: Seven Straight Sunrises in the Desert”