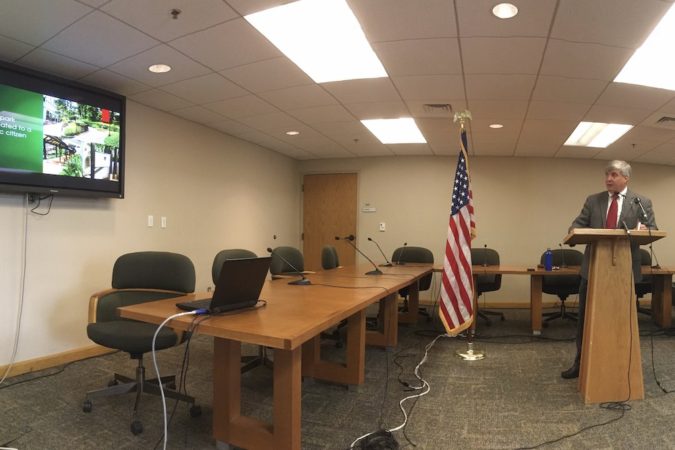 Fresh from his travels abroad, Pensacola Mayor Grover Robinson returned to his weekly press conferences Monday with a presentation on his time in Singapore, as well as a word about the city’s recent public comment SNAFU and also some news about plans to hire someone tasked with helping to combat violent crime by stopping it before it ever happens.

“I told somebody, anytime he wants to come over and offer $4.8 million, he’s welcome to,” Robinson joked.

The infusion of money from the Florida Job Growth Grant Fund will be used for the continued development of an aviation maintenance facility at the airport. The facility — being realized through a partnership between the city and ST Engineering, as well as a whole lot of public funds — currently has two hangars, and will eventually have four. The economic development project aims to create jobs in the region and spark an aviation overhaul hub. Robinson noted that the state funds were appreciated, as they helped the city reach its funding goal for the project.

“That kind of closed out the last loop of the $210 million,” the mayor said.

ST Engineering was what took Mayor Robinson to Singapore over the past couple of weeks. He traveled there to meet with the company’s executives and discuss its operations and future in the local area.

Monday, the mayor presented a slideshow of his trip to Singapore. As he flipped through photos of his time in Singapore — showing the mayor and Escambia County Commissioner Robert Bender meeting with ST execs at an airshow, highlighting cultural spots, as well as areas the mayor thought were municipally relevant — Robinson explained how he traveled to the area to talk business with ST, but ended up gleaning many, often unrelated valuable takeaways.

“I was blown away with what else I saw there,” he said. “I think there’s a lot to learn.”

Among the things the mayor found valuable in Singapore were community art installations that relayed the region’s story, civic architecture, multi-purpose paths and wayfinding signage.

Robinson also noted that his trip — which is expected to cost between $7,000 and $8,000 — is being paid for out of funds from the airport, as opposed to out of the city’s coffers. While the airport is owned by the city, its budget is separate from the taxpayer-funded city budget.

In an effort to cut down on violent crime in the area — an effort that is ongoing, and ramped up as of late — the mayor said Monday that the city will be hiring someone to work with schools and the faith-based community to steer youth away from a life of violence and crime before they head down such a path.

“I mean, we’ve got to do something different,” Robison said.

The mayor said the concept of hiring someone to work violent crime from a civilian angle came out of a conversation with Pensacola Police Chief Tommie Lyter. The chief said that the police, by design, could only respond to crime after it occurred, whereas, in this instance, the city is looking to prevent it from ever occurring in the first place.

“It’s not like “Minority Report,” where they know who’s going to shoot before they shoot,” Robinson said.

The mayor did not specify how this new position would function, other than the individual would coordinate with schools and churches in effort to steer youth away from violent crime.

“If I want to stop the law from being broken, I’ve got to work in other areas,” Robinson said, explaining the civilian angle. “It’s not about enforcement; it’s much more about planning for the long game.”

The city is looking to bring someone on board quickly within the next few weeks. This position will report to Neighborhoods Administrator Lawrence Powell.

During Mayor Robinson’s absence, the Pensacola City Council, sitting as the Community Redevelopment Area, made a decision regarding $18 million of downtown infrastructure funding. The problem is, they did so without reviewing the submitted public comment.

“I hear there were some things we probably would have handled a little differently,” the mayor said, alluding to the failure to provide council members with the public comments.

Council was being asked to consider how to spend $18 million in the urban core CRA, with the city administration recommending four projects, most of them put forward by New York-based landscape architect firm SCAPE during a lengthy, public-input intensive process last year. Some members voiced concerns about some aspects of the projects, particularly one that featured a public-private partnership. Still, the council ultimately ended up giving the go-ahead to move forward on the projects. Among the never-read public comments were concerns detailing SCAPE’s reservations about the plans presented by the city.

Mayor Robinson said that CRA Director Helen Gibson had a lot to handle between pitching the projects to council members and then following through by securing an affirmative vote and that she overlooked the public comment aspect.

“I think sometimes everything doesn’t happen perfect,” he said.

Robinson noted that the project plans presented to council members were conceptual and that the city would “find ways to fine-tune” the plans. He also said that an extra layer of approval has now been put in place to assure council members make their decision after having seen the public comments and that in March the city council will be asked again to sign off on the project (this time as the city council, not the CRA).

“I’ve gone ahead and said that it’s that important,” Robinson said.