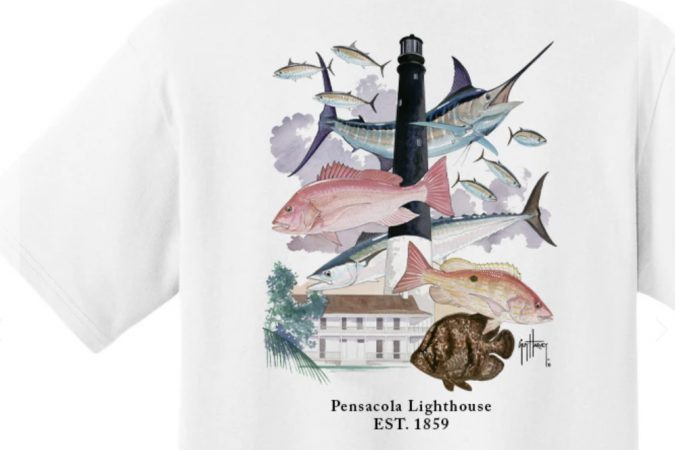 The weather Monday was about as pleasant as it gets in February, and Pensacola Mayor Grover Robinson had some equally pleasant news to mix into his weekly presser along with a discussion of COVID and strained relations between citizens and police: famed saltwater-art icon Guy Harvey is featuring Pensacola in one of his works.

“Our Pensacola Lighthouse is going to be featured on a new Guy Harvey t-shirt,” Mayor Robinson said proudly.

The Pensacola Lighthouse — iconic, like Harvey — was built in 1859 and is located on Naval Air Station, Pensacola. A portion of the profit made from the sale of these t-shirts (available on guyharvey.com), featuring the lighthouse and various local fish species, will benefit Ocean Conservancy, a non-profit environmental organization.

“It has the lighthouse, with several of the fish you can catch right offshore from the lighthouse, in the gulf right there,” Robinson said, holding up a rendering of Harvey’s Pensacola Lighthouse art.

After a rough few weeks following the holiday season, the local COVID case numbers have trended in a more positive direction, with indicators like test-positivity rates and the hospitalization count decreasing and vaccinations increasing.

As of Sunday, the positivity rate was around 5 percent.

“Anywhere under six, under seven is really getting us back down to where we need to be,” said Mayor Robinson.

And local hospitalizations were listed at 104.

“We’re hoping to get soon to double digits,” Robinson said of hospitalizations, explaining that that’s when the city would be reassessing safety measures (such as its mask mandate) currently in place. “Things come down we’re going to be looking for ways we can work with citizens to be less restrictive. If things go up, we’ve got to get back to our good habits.”

Beating back the coronavirus appears to hinge on rolling out a vaccine, which is currently being done. Slowly.

The Pensacola area has a collection of sites that have served as distribution locations, with the state’s 65-plus population given priority. There have been hiccups — such as last week’s missed vaccine shipment due to winter weather crashing the supply chain — vaccinations have been provided to an increasingly large portion of the priority population.

Monday, Mayor Robinson addressed what he said appeared to be some racial disparity in local vaccine distribution.

“The numbers are —we are seeing some of those out of whack,” Robinson said. “But I don’t think it’s distribution.”

The mayor said he thought the local Black population was not getting the vaccine at the rate of the white population, but not because of anything related to distribution, pointing to the fact that Community Health of Northwest Florida, a public health facility, received 800 doses of vaccine in a recent shipment from the state.

“Which was double Sacred [Heart hospital, or Ascension], which was double Baptist Healthcare,” Robinson said, noting that providing the vaccines to the public facility was meant to help serve “an underserved market.”

Mayor Robinson said he believed the reason vaccines were slow-going in the Black community was “based on mistrust” rooted in the tragic history associated with vaccines within that community. One example of past vaccine-related injustices is the Tuskegee Study of Untreated Syphilis in the Negro Male, which the U.S. Public Health Service conducted from 1932 to 1972 in Alabama.

Robinson said he had spoken about this issue with Pastor Issac Williams of Greater True Vine Baptist. The pastor, who sat on the mayor’s transition team, is working within the Black community to dispel fears and encourage participation.

“Even though vaccines have had some stigmas in some of our communities, we need to look past that and really work together on this one,” the mayor said.

Since last summer, the city’s Citizen Police Advisory Committee has met to discuss how best to improve the dynamic between the Pensacola Police Department and the community it serves. The committee is due to submit a collection of recommendations to the mayor next month, and Robinson sounds only half enthused by the prospects.

“We’ve tried to allow them to discuss as many things and bring forward their ideas. Some things they’ve done have come forward and presented, we can do and absolutely make changes. Some things have centered on stuff that really is going to be outside of our capacity to do.”

CPAC’s recommendations have thus far ranged from decriminalizing small amounts of marijuana to initiating a partnership between the PPD and a local youth athletic league. On Monday, the mayor said that some of the discussions occurring among CPAC members were “one-sided to the police” and encouraged the committee to strive to provide recommendations to the mayor that “build trust.”

“Trust is a two-way street,” Robinson said, referring to the relationship between police officers and citizens. “As we move forward, I want to continue to focus on some things that are important in our country and our state and in this time in northwest Florida, that we continue to keep a focus on what we can do to build trust within our community. If we can build trust, we can have a great community. If we build common things that we can all agree on and works toward, those are things that will make our community better.”

Last week, during a CPAC town hall, committee Chairman Drew Buchanan indicated he felt that the mayoral committee should remain active indefinitely. Robinson said that would depend on the recommendations provided by the committee next month: “We’ll move forward from there.”

The city is required to conduct a charter review before the 2022 election. Mayor Robinson said that the city’s legal team is currently working out the details of the process.

“This will be a review of the charter by citizens,” the mayor said.

The city’s last charter review process resulted in a switch from a council-manager to a strong-mayor form of government. Robinson said that staff would have a better idea of the upcoming review’s particulars over the next couple of months.

“This is really sort of the first time we’ve had an opportunity to do it; we sort of have a blank slate in front of us insofar as how to do it.”