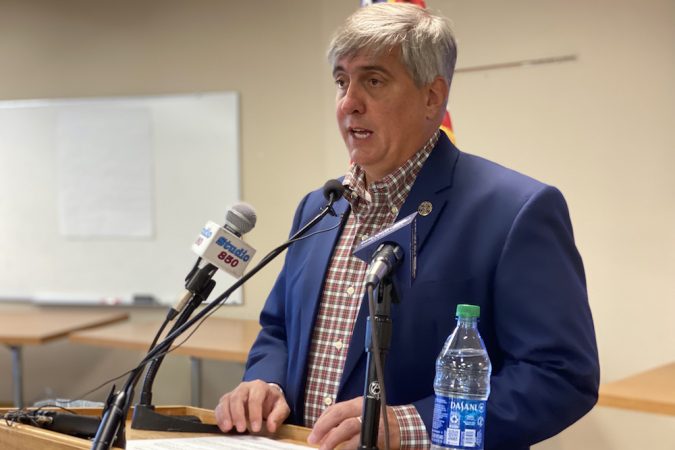 It looks like the homeless encampment beneath a stretch of interstate overpass near downtown Pensacola will soon be no more – because of safety and park development plans. Plus, the pandemic has eased, and funding has been directed toward homeless initiatives.

During his weekly presser conference Monday, Pensacola Mayor Grover Robinson turned much of his focus toward this issue, stressing the multiple reasons he felt the homeless encampment — currently protected via a municipal eviction moratorium — should be moved in January.

“We’ve got a plan, we need to be executing, we need to be moving forward with that plan,” Mayor Robinson said, brushing any notion of a potential moratorium extension issued by the Pensacola City Council.

In January, the mayor said, the Florida Department of Transportation will be requesting people leave the encampment so that development can begin on the long-planned Hollice T. Williams Greenway project.

“DOT is ready for us to get people out of there,” Robinson said.

This works out all right, the mayor continued, as the city council recently dedicated more than a million dollars in federal funds to initiatives aimed at creating bed space at shelters.

“That funding is flowing in that direction,” said Neighborhoods Administrator Lawrence Powell, clarifying that the city was looking to efforts from Re-Entry Alliance Pensacola, Canopy of Hope and Brightbridge Ministries, in realizing the needed shelter space, adding that in total, the organizations will be putting 42 beds online.

Powell went on to say that the city will also be looking to such organizations to be transitioning individuals from beneath the overpass.

“Long story short: part of the transition is being worked by those providers, those 501(c)3 entities in partnership with the city, so hopefully as we transition towards an exit of individuals out from under the bridge, we’ll be transferring them to safe facilities and with coordinated care as well,” Powell said.

Mayor Robinson said that if the city needed to come in January, it could also tap into $180,000 the city council allocated to put people up in motel rooms if shelter space was unavailable.

“Potentially. I mean, one way or another, we can make all that work,” he said.

Mayor Robinson also stressed that the city had been continually transitioning folks out of the camp and into some shelter space. It’s just that those people get replaced with new individuals entering the camp.

“I think the issue is: when do we stop allowing people to come in? I think you’d be shocked if we stopped letting people move in,” Robinson said. “We can move everybody out real fast. I think the question is, will we have people moving back in.”

While the impending greenway project, the easing of the pandemic and the promise of new shelter space have long underpinned the argument to end the moratorium and clear the grounds beneath the interstate, Mayor Robinson added another reason Monday: safety of the campers.

On Saturday, there was an incident in which a driver had an accident on I-110, over the Pensacola Police Station, so no one was beneath that stretch of overpass.

“There was an individual not paying attention; they were looking at their cell phone, they ran up on the interstate, thank goodness we had no significant damage,” Robinson said.

Mayor Robinson held up this “sobering event” when poo-pooing any talk of extending the eviction moratorium.

“It’s dangerous, any number of things can happen,” he said, adding that he was sure a majority of city council members felt the same. “Obviously if things had gone worse and that car had had more momentum and that had happed over where the people were we’d have people killed right now that were sleeping under the interstate.”

Robinson noted PHS’s “significant, deep, rich history in our community,” dubbed it a “great school” and said it has “a very good future as we move forwards.” And the existing service center planned for Palafox would “have to conform with any rules and laws that are associated with being the distance they are to PHS.”

“I don’t think any of the things that are happening in the city are doing anything that are going to be detrimental to Pensacola High School,” Robinson said.

The mayor also noted that the property in question was formerly a public health clinic serving the same community: “Sometimes people get emotional and they forget about the way things have functioned for a long time, they forget about a lot of other things, they get caught up in the moment of an issue and they don’t really thing about how it all works together.”

“I’m not sure what’s going,” Robinson said. “I hope it’s not just saying, you know, ‘we don’t want poor people within a thousand feet of PHS’ — that’s going to be difficult to do.”

1 thought on “Presser Notes: Winding Down the Overpass Camp”