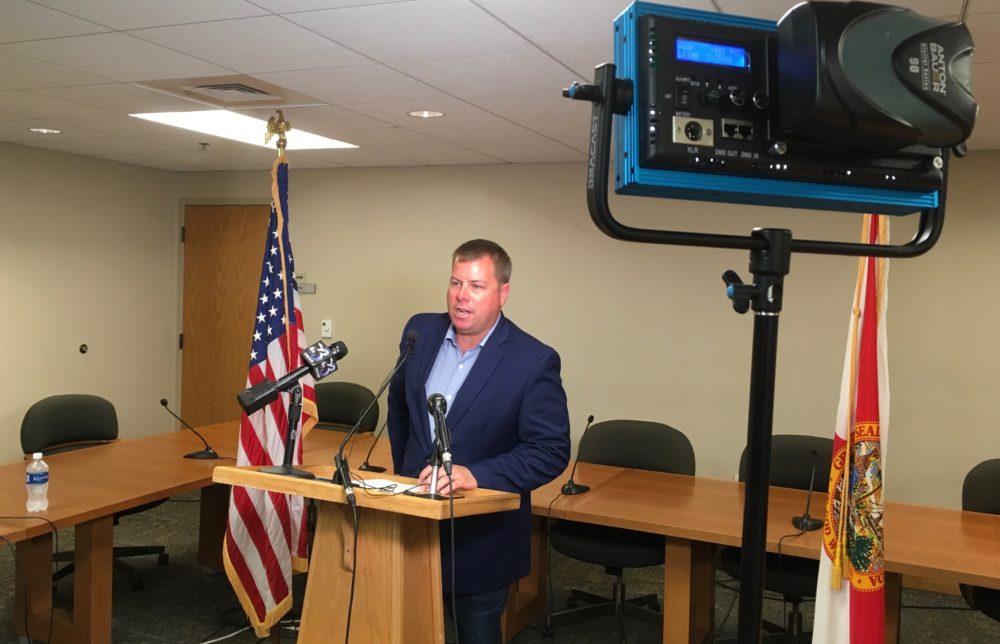 After knocking out a couple of “talking points”—items pertaining to some new staffers starting work, or a carseat inspection drive over the weeken—the city council president got straight to the day’s main event: SCAPE’s final proposals.

“There’s two big projects that I can see definitely happening, because there’s a lot of creative stuff that can be done,” Terhaar.

Terhaar had just gotten a look at what SCAPE, an urban design firm from New York City, is proposing for the downtown core. The firm was brought to town by developer Quint Studer, with a mission to reimagine the core as a more pedestrian-friendly and connected heart of the city with better access to the waterfront.

SCAPE’s proposals essentially involve major improvements to the Bruce Beach area, and also call for focusing on an area of the core outlined by Main, Palafox, Jefferson and Cedar streets and making changes that transform the area into a pedestrian-centric hub.

Terhaar said that he thought the proposals pertaining to the downtown streetscape could be pretty doable. Some of the work, he said, is fairly easy and cheap—“just restriping and repainting”—while other portions, such as installing barriers between traffic and bike lanes, or physical medians, would be a heavier lift.

“I think that portion can get funded, incrementally, fairly quickly, because, again, there’s a lot of stuff that can be done for nominal amounts,” Terhaar said.

The council president said the portion of SCAPE’s proposal pertaining to Cedar Street could present the biggest challenges in the core area. The firm envisions the street as a ‘woofner,’ or living street, where pedestrians and vehicles co-exist—traffic is slowed by alternating bioswale curbs and the street has the ability to be shut down if so desired.

Terhaar said that although potentially expensive, the Cedar Street proposal made sense because it was not a heavily trafficked route. And the concept of the woofner is one he feels the area would warm up to.

“The idea of the woofner is a good idea to me, it’s just one of those things, it’s kind of like roundabouts, you know, in America people don’t really—they see a roundabout and they get kind of scared,” Terhaar said. “I like the idea, especially since it’s not a major road.”

Terhaar also said he thought the Cedar Street portion of the proposal — aimed at creating a walkable path from Bruce Beach to Bartram Park — could be accomplished despite seemingly running into an issue at the entrance of Port Royal, a private housing development.

“It does dead end into the Port Royal entrance,” he said, before adding that the city still owned enough of the surrounding property to make the path work. “I think there is a connection, I think it can be made. I don’t think the city’s going to have to take any property.”

The council president said he felt SCAPE’s proposal pertaining to Bruce Beach would be a much bigger challenge.

“That’s going to be a large project—the funding from that, I’m not sure,” Terhaar said. “I’m sure they’ll be some discussions at our budget meetings about ‘how do we do some of this stuff?’”

Terhaar said that the city may pursue grants to help fund some of the work being proposed. And, maybe he’d be on board with the mayor’s recent suggestion of refinancing debt associated with the development of Maritime Park for a gain of $17 million.

“That’s a lot of money,” he said. “I’m a little leery of that refinance, but, you know, if the numbers work and you can use the money toward something that would improve that property as well as the property around it, I can see the benefit of that.”

Ultimately, though, Terhaar said he see outside funding sources coming into play if SCAPE’s vision is to be realized.

“I think there’s going to have to be some outside money that’s going to have to come in,” he said. “Public or private, there could be a combination of the both. I do think that the private sector knows that they benefit from this, so we’ll see.”

The How of the Y-deal

In addition to speaking with the media about the just released SCAPE proposals, Council President Terhaar also discussed the city’s land-and-services deal with the YMCA.

Last week, city council approved a deal between the city and the Y that will allow the city to take over the organization’s property on Langley for the purpose of placing a soccer complex on it and neighboring Hitzman Park, and the Y will relocate its services to the Vickery Community Center, where it will lease space and plan for its eventual new facility on a plot of land nearby.

Just before council approved the deal, city administration revealed that the proposed soccer complex would be running an additional $750,000.

“I’ve been told that the funding has been identified and that it will be in the budget when we receive it next month,” Terhaar said.

City CFO Dick Barker told council that the fund had been found within LOST, or Local Option Sales Tax revenue. The council president acknowledged that council would likely have a spirited discussion about the funding request.

“I do feel like there’s going to be some headwinds the budget is going to have to go through in order to get that done,” he said.

At the same time, he allowed that council’s approval of the YMCA/soccer complex deal boded well for the budgetary ask.

“Well, I think if we didn’t approve the deal it’d be implicit that we didn’t want to spend that money,” Terhaar said. “I can see that that’s a positive sign, that we passed it even knowing it’s going to cost an extra $750,000, because that was common knowledge whenever we had the vote. I do think it’s a step in the right direction, let’s put it that way.”