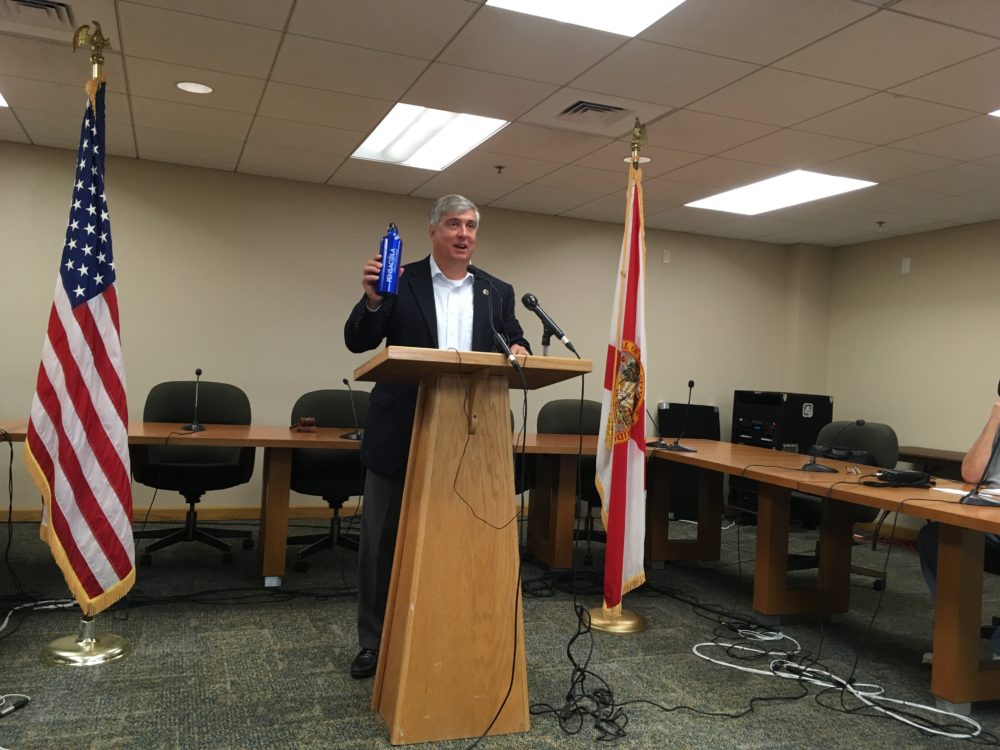 “We’re trying to cut down on, reduce and eventually eliminate the use of plastic here at city hall,” Robinson said.

The water-bottle move comes after the mayor said he would shift the city away from using disposable coffee cups and other plastic and Styrofoam products. The blue water bottles have been distributed to all employees throughout Pensacola City Hall, as well as those working in the various city departments.

“Everyone has one,” the mayor smiled.

Moving on from the water bottles, Mayor Robinson spoke Monday about recent shootings in the area, a just-released city employee survey, the city’s deal with the YMCA and more.

Last week, Mayor Robinson held a joint press conference with Escambia County Commissioner Lumon May, in which they asked the community for help in solving recent shootings in the area. The two public officials were joined by family members of shooting victims.

On Monday, Robinson noted that the funeral for Elizabeth Harris, a victim of the recent drive-by shooting at Platinum Club, was held over the weekend. He said the Pensacola Police Department was still focused on trying to make headway on that case.

“It continues to be the number one priority of the Pensacola police and they are continuing to move on that and trying to solve that case,” he said.

They mayor said that police had made an arrest related to a separate shooting that took place on Garden Street, and that the arrest was a result of information the police had received from the community.

“The challenge is getting people to come forward and say something,” the mayor said. “So, clearly somebody said something, and it led to an arrest, so we are very happy about that.”

“Our job is to get our employees engaged and get them feeling good about what they do and coming to work every day and engaging and making this community better.”

The city of Pensacola recently conducted an employee survey to get a read on how its workforce felt about working for the municipality. The results were released during the Monday morning presser.

“It told us a lot of things,” Robinson said of the survey.

Specifically, the survey — which saw a 76 percent participation rate — revealed that two-thirds of city employees “appear to be satisfied and enjoy working for the city of Pensacola.” However, only 49 percent of those employees are “engaged.”

“Our job is to get our employees engaged and get them feeling good about what they do and coming to work every day and engaging and making this community better,” Robinson said.

The survey also reflected some challenges for the city beyond finding ways to better engage employees. Workers, perhaps not surprisingly, would also like better pay.

“We realize that,” the mayor said. “We’re already making moves with the budget that will be released very shortly, some things we’re doing for compensation.”

Robinson framed the overall findings of the survey as neutral and said they should be viewed as a roadmap of sorts.

“This necessarily isn’t saying bad or good it’s just simply saying this is where we are and here are the things that we actually can make a difference in,” he said.

“If you think West Cervantes is a turkey then you need to come here and see what’s going on, you need to go meet the families who dealt with tragedy and see what they’ve gone through.”

Recently, Florida Tax Watch labeled various beneficiaries of public dollars as so-called ‘turkeys.’ The group singled out 109 such turkeys — equaling $133 million of the state’s $91 billion proposed budget. More than $5 million of the listed projects are in Escambia and Santa Rosa counties.

“They don’t know Pensacola, they just see something, they’re in Tallahassee, they see something on a budget,” the mayor brushed off Tax Watch’s assessment.

Robinson defended several of the listed project he said were important for the city, calling them “vitally important.” The projects totaled about $3.5 million and involved the expansion at Pensacola’s airport to facilitate a manufacturing facility and accommodate the-related economic development effort known as Project Titan, safety improvements to West Cervantes and the furthering of cybersecurity offerings at the University of West Florida.

“All these projects, whether they’re going to Escambia County or someone else’s community, they’re necessary for that community,” the mayor said. “If you think West Cervantes is a turkey then you need to come here and see what’s going on, you need to go meet the families who dealt with tragedy and see what they’ve gone through. If you think ST and Project Titan is a turkey, like I said, come sit out with me at shift change at 6:30 at the airport and we’ll go talk to some of those employees that’ve had the opportunity to see economic opportunity in this community and get workforce training.”

“If something were not to work, the worst thing that would happen is we’d buy a new gym facility, a new work-out facility that’d be a part of it.”

This week, the Pensacola City Council will be considering a deal with the YMCA of Northeast Pensacola that involved the Y relocating to the city’s sporting grounds near Roger Scott Athletic Complex and using the Vickery Community Center for some of its programs.

Mayor Robinson elaborated on the potential — which would allow the city to use the Y’s current property for a planned soccer complex on Langley Avenue — Monday, specifically the length of the proposed use-agreement of 30 years.

The nuts of the deal are this: the Y will operate its after-school program and other programs out of Vickery, as well as continue to manage the nearby pool, with plans to construct a new facility of its own on adjoining property the city is providing; meanwhile, the city will construct a three-field soccer complex to accommodate a growing youth soccer program on already-existing fields off Langley’s Hitzman Park, as well as incorporating the neighboring YMCA property.

Robinson called it a “win-win for both organizations,” but allowed that the 30-year lease agreement was “kind of a strange arrangement.” When asked if Y would be able to resell the property the city is donating to the organization as part of the deal, the mayor said the city would be given first dibs.

“If something were not to work, the worst thing that would happen is we’d buy a new gym facility, a new work-out facility that’d be a part of it,” he said. “I mean, I think that’d be the worst downside of what would end up happening.”

Robinson said he expected the Y deal to come up during a town hall event at the Vickery Center later this week. In addition to discussing the actual deal, he’s also expecting to field questions about the impact a soccer complex with have on Langley Avenue, where concerns about traffic and congestion have been raised.

Insofar as Langley is concerned, Mayor Robinson said there were several potential concepts to consider. They include reworking the school zone near Scenic Heights Elementary, putting a roundabout in at Leesway and Langley, and putting either a roundabout or traffic light at Hilltop, at the entrance to Hitzman.

“We want to take some of the speed out of that and make it safer,” the mayor said.

Gonna Get Around To Getting Green

“We’re going to do it at some point, when I can finally get staff pulled away from a couple of other projects to start this project.”

Last week, members of the city of Pensacola’s Climate Mitigation and Adaptation Task Force participated in a forum where they discussed their expectations for how the city should approach the task force’s report.

The report was released late last year, with some resulting recommendations brought before Pensacola City Council for consideration. Robinson, however, requested the council hold off on the task force’s recommendations for a while.

Monday, Robinson said he was still committed to acting on the recommendations outlined in the climate mitigation report, which suggested things like conducting a vulnerability assessment and committing to 100 percent renewable energy by 2040.

“If you want them all done tomorrow, they’re not all going to be done tomorrow, but they are gonna get done, I mean, I do expect us to do that,” Robinson said.

The top priority among the task force participants in last week’s forum — moderated by Christian Wagley, who represented environmental interests on the mayor’s Transition Team — was creating an inventory of the city’s greenhouse gas emissions. Such an inventory, they said, need to be done to serve as a baseline to inform other efforts.

Robinson said Monday that conducting such an emissions assessment was still on the table. Eventually.

“It’s on the table,” he said. “We’re going to do it at some point, when I can finally get staff pulled away from a couple of other projects to start this project. I mean, every time we turn around, we’ve got a new project, but we are gonna do it.”

Other recommendations, like the renewable energy goal, are not on the radar.

Robinson said he’d prefer to focus on goals attainable within his political term in office.

“I think we need to do something that we can realistically do over eight years and we can set a goal to do that,” he said. “— but it’s gotta be in concert with all the other things we’re doing at the same time and we’ve got a lot of things working.”

Robinson said the city was already making efforts on the environmental front. He mentioned conceptual musings, such as the potential for creating a solar-power installation at the city’s public works field, as well as more tangible efforts, like the new city-branded water bottles.

“What we hope to do, we hope to change behavior. I mean, again, one plastic bottle is not something, but if you change behavior, over time what you can make is a significant difference,” he said. “We’re not gonna cure, save the Earth tomorrow, but if we take little steps, we’re gonna do it in the future and we’re gonna make a much better world.”

There are plans for new disc golf course in Milton. Mayor Robinson said he didn’t see any need to try to compete, pointing to the city’s existing nine-hole course at Hitzman Park and saying it was good enough.

“If it’s not challenging enough for you, maybe this’ll be good and you can go to the Milton one and they’ll have a good one,” he said. “We want to offer what we can, and maybe we’re like a beginner’s course and then you move up.”

Brian Cooper, director of Parks and Recreation, said the city only has a few parks that could possibly accommodate even a nine-hole course, and listed multiple other disc golf venues in the region: there are courses in Gulf Breeze, at UWF and near Perdido Key.

“So, there’s quite a bit of disc golf available in the area,” Cooper said.

Monday’s presser will likely be the last such occasion in June, as Mayor Robinson is out of town for the next two Mondays. The mayor hinted at the chance he might find a stand-in, but it doesn’t appear likely.

“I have offered Andy the opportunity to come here and speak, but I don’t know that he’s necessarily interested in doing that,” Robinson laughed, explaining he’d made an open invitation to Pensacola City Council President Andy Terhaar.

The mayor’s weekly press conference is set to resume in July.