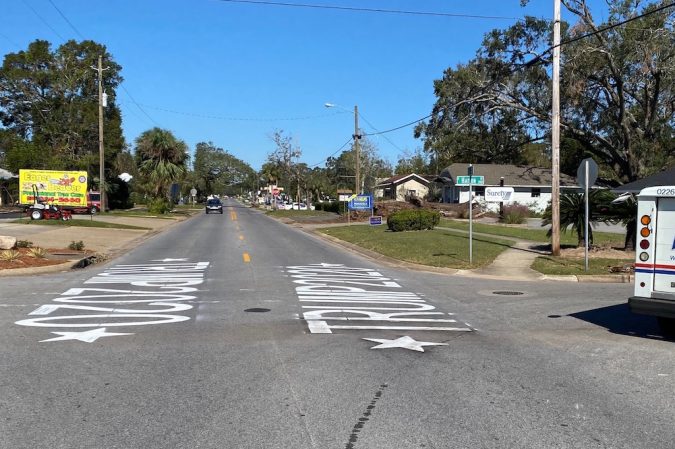 During campaign season, signs supporting particular candidates are a common sight along roadways. But a day before Election Day, some new, unauthorized political tagging has appeared along — or, rather, on — 12th Avenue in Pensacola’s East Hill neighborhood.

“I just heard about that this morning,”, Pensacola Mayor Grover Robinson said Monday.

At the intersection of 12th and East Hatton Street, painted in white in each lane of the roadway is ‘TRUMP 2020.’ Mayor Robinson said that the overnight painting was not permitted by the city.

“It’s my understanding that is in the process of being removed at this time,” the mayor said. “It’s unfortunate. It’s an act of graffiti and vandalism and that’s not what we need. That doesn’t help us be more productive in this community.”

Robinson repeated sentiments he expressed last week, urging a sense of local community despite political differences during what is a deeply divisive presidential election between the president and his challenger former vice president Joe Biden.

“We have people that see all different ways, but actually can work together, and when we do that we help move this community forwards, even in difference,” Robinson said. “But doing things that are against rules and permitting — it’s unfortunate that that happened and we’re in the process of taking care of it at this point.”

As of midday Monday, the political graffiti remains on 12th Avenue.