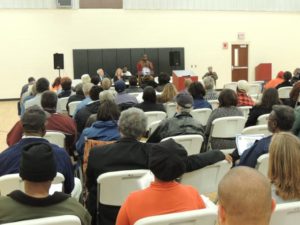 The residents of Wedgewood weren’t much interested in the stricter ordinances being proposed to regulate borrow pits and construction & debris landfills.

No, they made it clear during the three-hour public comment portion of last night’s meeting at the Marie Young Community Center that they want the Rolling Hills C&D facility closed and removed from their community.

Years of county staff and leadership not listening to their complaints have made the people of Wedgwood distrustful, and County Administrator Jack Brown acknowledged the county had not done a good job of enforcing the current laws concerning the pits and landfills.

“We have not done a good job of regulating these pits,” said Brown, who has been county administrator since June 2014. “We didn’t have a good handle on it, but we now feel like we’re headed in the right direction.”

Brown told the crowd of more than 70 people that the Board of County Commissioners (BCC) had hard decisions ahead.

County Attorney Alison Rogers explained what he meant. The new ordinances has added definitions of what is meant by abandoned or closed facility, established greater setbacks and stricter operating rules. However, the she, Brown and the county staff need the BCC to give them direction on how to deal with the existing borrow pits and landfills.

Rogers said, “The most challenging decision is what do we do with existing borrow pits. Some literally have existed six decades. What will be the extent of grandfathering?”

She explained that it would legally difficult to force changes that involve the land itself, such as requiring old facilities to have greater setbacks. However, the county could enforce the stricter operating rules on the current pits and landfills.

It was the grandfathering that bothered the people of Wedgewood. Person after person came up to microphone and said they wanted the Rolling Hills facility closed.

Currently the landfill owners are in court. DEP has revoked its operating permit and the owners have had hearing to have that decision overturned. Escambia County and DEP have also asked for an injunction to shutdown Rolling Hills operations – that hearing is set for April.

The words of the families in Wedgewood – many wearing orange t-shirts over their clothes as a sign of solidarity- showed their pain and frustrations:

“Our community is dying.”

“You still are not giving us what we want. We were here first. They violated us.”

“Give us back our neighborhood.”

Currently the BCC has a moratorium on pit and landfill permits, which is set to expire Feb. 22. The proposed rewrites of the ordinances and land code sections regarding pits and landfills will next be considered by the Planning Board on Jan. 13. The final drafts will have hearings before the county commission on Feb. 5 and Feb. 19.

The commissioners can expect the people of Wedgewood to be in attendance.