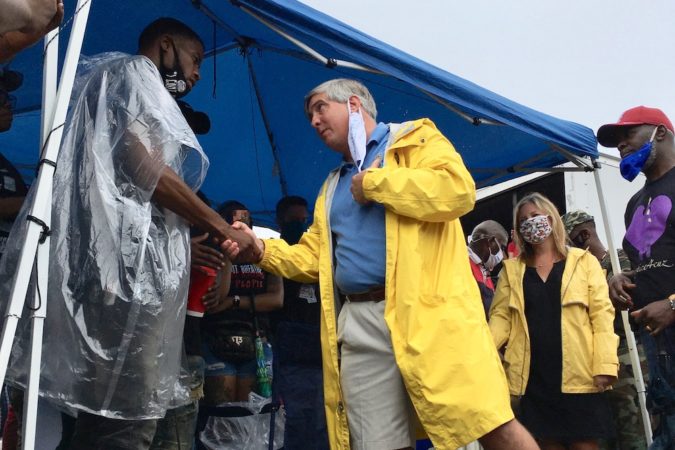 It was aggressive negotiations to be sure — linking arms and blocking traffic at the foot of the Pensacola Bay bridge — and Hale Morrissette was pretty pleased with the results.

“I think it went well,” reflected Morrissette, a leading voice in the local community group Pensacola Dream Defenders, summing up her take on the day in a single word: “Victory.”

“It didn’t need to happen,” Robinson said. “Everything that was accomplished in there could have been accomplished talking on the side of the road.”

The Saturday protest at Graffiti Bridge — marking more than a week of protests at the 17th Avenue site — had been going on for a few rain-drenched hours already, with hundreds gathered to call for local officials to seek reforms aimed at improving the relationship between law enforcement officers and the communities they serve, specifically African-American communities. The local protest mirrors like-minded protests occurring around the nation in the wake of the death of George Floyd, a Minneapolis black man who died in handcuffs as a white police officer knelt on his neck.

Floyd’s death is far from an anomaly, but rather a tipping point of sorts. Communities around the country can site similar incidents. For example, former Pensacola Police Department detective Daniel Siemen was fired last year for breaking the department’s use-of-deadly force policy after he shot Tymar Crawford multiple times at close range during a July 5 traffic stop.

“We are here to say to America, ‘Get you knee of our necks!” local Civil Rights icon Rev. H. K. Matthews spoke to the protesters gathered at Graffiti Bridge early on in the day.

Sitting in his wheelchair, sheltered from the rain beneath a pop-up canopy, Matthews drew parallels between racial tensions currently engulfing the country and those of the Civil Rights era, when he marched with Dr. Martin Luther King, Jr. 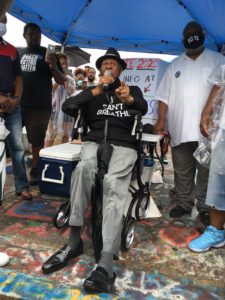 “I came down here to stand in solidarity with all of y’all that are here today and to tell you thank you so much for coming out,” Matthews addressed the crowd. “I got a good whuppin’ on the Edmund Pettus Bridge on Bloody Sunday in 1965, and I’m proud that I was there. I’m proud that you’re here.”

Mayor Robinson also showed up Saturday morning to speak with the protesters.

“Thank you for showing what Pensacola can be, non-violent and moving forward. Black lives matter in Pensacola,” Robinson said, telling the crowd he “mainly came here to listen today.”

And there was much listening to do, as numerous speakers directed their remarks specifically to the mayor.

“When the city is crying, it’s your job to listen.” — Kyle Cole

The city of Pensacola has been under scrutiny following the death of Crawford last July. And before that, events like the 2009 death of Victor Steen, a black teenager on a bicycle who was chased, and eventually run over, by a PPD cruiser as an officer fired his Taser from the moving vehicle.

Following last year’s death of Crawford, as well as the following grand jury recommendations, Mayor Robinson has taken steps to improve aspects of the city’s police department. Chiefly, Cedric Alexander, a retired law enforcement officer with a national reputation, has been hired to work with the PPD towards improving how officers interact with the local community.

The mayor — along with Alexander and PPD Chief Tommie Lyter — are now turning their focus to the creation of a citizen advisory, or oversight board. The creation of such a body was at the core of a lists of demands issued by Dream Defenders following Crawford’s shooting.

“We’re happy to sit down at the table to make Pensacola better,” Robinson assured the crowd. “You’ll always find us ready to do that.”

“We’re happy to sit down at the table to make Pensacola better.” — Mayor Grover Robinson

The mayor also said some things were not within his power to do — “I’m the mayor, not the king” — and encouraged the protesters to participate in the city’s upcoming charter revision process.

Some time later, after protesters flooded 17th Avenue, Morrissette led a breakaway contingent towards the bay bridge, where they linked arms and blocked traffic in both directions. She was unsatisfied with Mayor Robinson’s remarks.

“The mayor kind of spouted a few things that were very contradictory to what we’ve been talking about for the past eleven months,” Morrissette explained later.

As the protesters blocked the roadway, one landed himself on the hood of a Ford Flex, the driver of which proceeded across the bay bridge as the man clung to the vehicle’s hood. Back at the human blockade, Lawerence Powell, the city’s neighborhoods administrator, attempted to talk the protesters out of the roadway.

“We’re not breaking the line until he comes out here and says what he needs to say, and it’s recorded,” Morrissette explained to Powell.

Eventually, Robinson did meet with the group of protesters in the road. They discussed several of the demands issued by Dream Defenders last summer, such as the issue of implicit and explicit bias within the PPD, the deprioritization of low-level crimes such as marijuana possession and, most notably, the securing of a seat on the yet-to-be-formed citizen oversight committee.

“Will you commit today that Hale Morrissette will be your appointee for the citizen’s council when it’s formed? Will you commit to that today?” community activist Nathan Monk asked the mayor.

Morrissette, momentarily brought to tears, took a second to respond.

“This is a start,” she said finally.

Later in the afternoon, Morrissette explained the importance of securing that seat on the oversight body, saying there was a concern that the board would lack a voice within the local black community. She’s still concerned about what exact form and function the committee will adopt.

“It’s vague right now,” Morrissette said. “I plan on being able to get clarification.”

Mayor Robinson said that the next step in forming the citizen initiative board is to schedule a couple of community input sessions, which Alexander will facilitate. And whatever shape the board takes, he had always expected that the Dream Defenders would get a seat at the table.

“I’m not sure where it goes, but some way or another, I think Dream Defenders has got to be associated — they’re the ones that came up with this idea,” Robinson said.

Robinson also spoke a bit about his decision to jump into roadway negotiations with the group of protesters Saturday, as opposed to calling for city police to clear the street.

“I was told it would’ve been forceable, and that’s not what any of us wanted,” the mayor said.