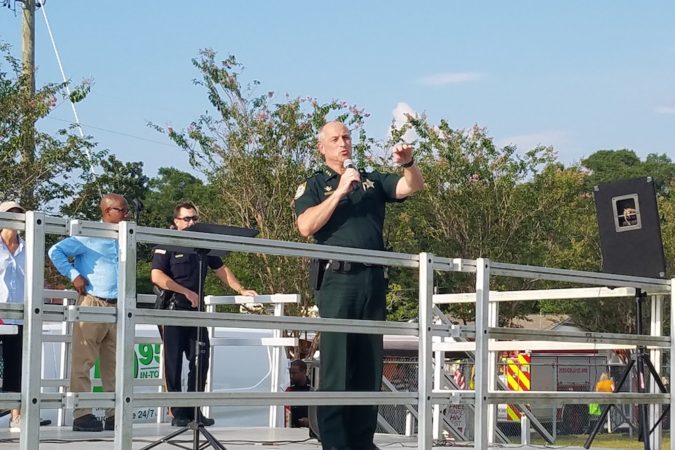 Chief Deputy Chip Simmons has the watched the video of the Minneapolis police officer kneeling on the neck of George Floyd. For him, the killing of the man was “a betrayal of the oath of the badge and just a betrayal of basic human decency, quite frankly.”

“I have a hard time watching the video in its entirety,” Simmons, a Republican running for Escambia County sheriff, told Inweekly. “Eight minutes is longer than I ever imagined it being. I find wishing that I could have been there to stop what’s taken place.”

He said he wasn’t making a political statement but was speaking from a career law enforcement professional perspective.

Simmons added, “I know that the overwhelming majority of the people that I have worked with and work with don’t have an evil heart like what we saw in the video.”

After Floyd’s death, the University of West Florida police chief wrote a letter to his staff that told his officers that they have an obligation to intervene when they see something outside of a policy or a in life-threatening manner. Simmons said Sheriff David Morgan has retooled the department’s use of force policy based on his recommendation.

“Our policy in the past said that you have a duty to report if you see something going on,” Simmons said. “I instructed our team to redo our own policy, and now our policy reflects that duty to intervene, in addition to the duty to report. Sheriff Morgan signed that policy just a couple of days ago.”

Simmons has dedicated most of his life to law enforcement. He started as corrections officer and was hired by the Pensacola Police Department in 1986, where his spent the majority of his career in narcotics investigations and SWAT operations.

When served as police chief, he instituted the area’s first bodycam program and sought accreditation for the department. He said, “We had been city since 1821, and we had never been accredited when a lot of other agencies were. I felt like we were in a position that we could become more professional through the accreditation process. For three years who worked on it and were able to gain that accreditation.”

He added, “When I was police chief, we did a lot more community engagement. We had the first Pensacola Police Department town halls that Mayor Hayward later adopted.”

Simmons later became assistant county administrator for Escambia County. When the county jail had an unprecedented high number of deaths, he also took on the role of chief corrections officer.

“My job then was to stop the jail deaths,” he said. “We revamped our policies, how we did things and how we treated the inmates. We were able to stop those deaths. I’m very proud of the work that we did, not just me, but the people that were working at the jail at the time, and Jack Brown for allowing me the freedom and liberty to go ahead and make those changes.”

In December 2016, Simmons was hired as chief deputy of operations by Escambia County Sheriff David Morgan. With his boss retiring this fall, Simmons made the decision to run for sheriff and faces Democrat David Alexander, who followed him as Pensacola police chief, in the November general election.

Simmons discussed the recent protests. He has been supportive of them but hasn’t agreed with the suggestions to dissolve the police force or prison system.

“I have been to a number of town halls and neighborhood association meetings, no one has asked for fewer law enforcement officers in their neighborhood,” he said. “There are some dangerous criminals that have been convicted and in prison instead of our community to do whatever damage to our community.”

Simmons said the sheriff’s office already as de-prioritizing lower level offenses. “Our top priority is the violent crime— robberies, shootings, stabbings, domestic violence and crimes against children. Do we, on occasion, have a need or the position to investigate lower level crimes? Yes, we do, which sometimes leads to larger crimes.”

He also said he supported a citizen oversight committee. “When I was a police chief, we had the citizens advisory committee, and we met at City Hall for a period of time. I am in support of that.”

In dealing with juveniles, Simmons supports the civil citations.

“As police chief, I made it a policy where if a juvenile fits the Civil Citation Criteria, the default enforcement action is the Civil Citation. In fact, if you deviate from that, you have to explain why,” he said. “We’ve done the same thing at the sheriff’s office now.

Simmons added, “It’s pretty clear that when these alternatives become available, I’m certainly willing to take a look at them. Not just talk about them, but take action upon those things.”