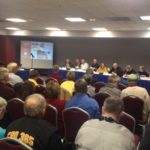 Over 60 citizens crammed into a Pensacola Bay Center meeting room to hear from the engineers, city and county staff and the Storm Water Advisory Team (SWAT) on the April 29, 2014 storm that dumped almost two feet of rain and flooded much of the city of Pensacola and Escambia County south of Interstate 10.

They heard about basin studies (we have 40 in Escambia County), Master Stormwater plans (that dated back to early 1990’s) and the definitions of the type of rain storms (a 100-year storm is one that has a one-percent chance of happening in any year).

They saw maps that depicted the April event and damage assessment. They were told 2,318 infrastructure damage sites were identified, and 80 percent of them have been repaired.

The citizens sat quietly, straining to see the maps on the screen. They waited their turn to speak. When they did, they asked for the city and county to work to together and get something done now. They talked about how flooding is still occurring every time it rains. They were upset that it didn’t appear the current stormwater system was being maintained.

“The citizens have high expectations that something will be done,” said city resident Gary Huston. “It has been eight months since the storm and we’re still talking.”

Huston pointed out that the stormwater drains in Aragon are “chocked full of water and not draining.” He handed the committee a photo that he had taken, “The water never recedes.”

He also talked about the number of empty lots in Pensacola and said that owners are afraid to develop them until the stormwater issue is solved. “This is an economic tragedy,” he said. “These lots lie fallow. This could all pay for itself, if we just do it.”

County Administrator Jack Brown assured the crowd that the county and city are working together. The Board of County Commissioners had agreed to pay the city’s portion of a match needed for a recent grant.

Brown said, “We’ve got to look at doing things differently. We can’t continue to do the same things and expect different results.”

Mayor Ashton Hayward was represented at the meeting by his assistant city administrator, Eric Olsen. Olsen said, “We fell the frustration. We should work faster.”

He said that the city needs public feedback to set priorities.

However, before any action, engineering reports must be completed. Those studies will support the grant applications. The engineers have estimated that cost to fix and build a better stormwater system could cost over $200 million – which is why grants are critical. Brown pointed out that most of those grants won’t reimburse the city and county for expenditures already made.

So there will be more meetings. The next SWAT meeting is Feb. 3 at 10:30 a.m. in the 4th Floor Training Room in county complex on Palafox.