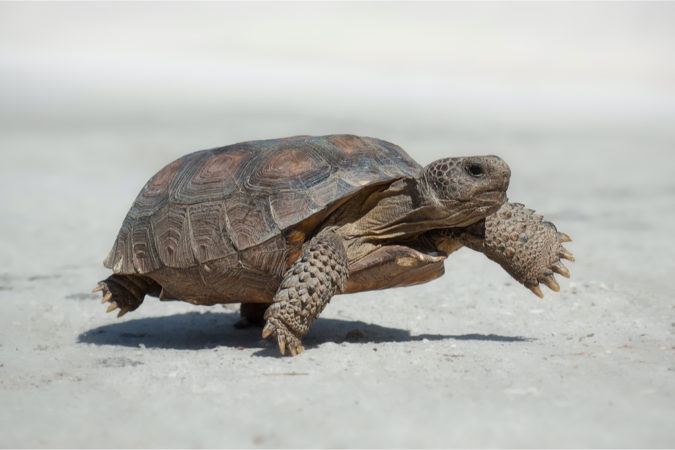 Turtles are plentiful in the Florida panhandle, and there are folks who still consider them to be a tasty meal. Even protected varieties of turtles, such as the gopher tortoise.

“Most of’em are the old timers who were around during the depression,” said Rick O’Connor. “They called’em Hoover’s chicken.”

Sea turtles, too, can be on the menu, particularly their eggs. O’Connor, who now serves as the Sea Grant extension agent for Escambia County, recalls a surreal scene during his time working Dauphin Island off Alabama’s coast in the late 1970s and early 1980s: “We had a guy come up and say, ‘What’s going on with the sea turtles? We can’t find the eggs anymore — they make the best pies and cakes.’”

O’Connor presented a lecture this month outlining the region’s turtle-particulars and the risks posed to the species by a blackmarket trade often linked to southeast Asia. The presentation wrapped up this year’s The Science Hour series, presented throughout the year by the University of Florida Institute of Food and Agricultural Sciences Escambia County Extension.

Turtles — and a lot of different types of turtles — call Escambia and the surrounding area home.

“It’s very wet, it’s very humid, it’s very muggy and turtles love it,” O’Connor said, pointing out that the region also has plenty of rivers and streams on which the turtles travel. “There’s all these different highways for turtles to move on.”

Florida, as a whole actually, is quite popular with turtles. And the Southeast United States in general, O’Connor noted, is one of two turtle “hotspots” on the planet, with the other being southeast Asia.

Three types of turtles are only found in the Escambia-Santa Rosa area within Florida. They are the spiny softshelled, the Alabama red-bellied and the Mississippi Diamondback Terrapin.

The Diamondbacks — which, like all turtles in the state, enjoy some level of protection — are pretty hot in the pet trade right now. A man was recently pulled over with a truck full of them up in North Carolina; it’s unsure if the turtles were collected in Escambia, but the scene seemed suspicious.

The softshelled turtle — we have all three varieties locally — also faces some risks. They’re among the varieties sometimes found headed out of the country at places like the Tampa airport.

“They’re very popular as a food item,” O’Connor said of the softshells. “There’s a lot of black market stuff going on with these guys.”

Florida offers protections to all varieties of turtles. The state lists three as imperiled: the alligator snapper, the Barbours Map and the Suwannee Cooter. Other types, the state allows for possession of up to one turtle per person per day for non-commercial purposes in recognition that there are people who consider the animals a food source.

Locally, people can have up to two turtles of species like the box turtle and Escambia map turtle. The gopher tortoise, however — that so-called ‘Hoover’s chicken‘ — is completely off limits.

Only found in the Southeast U.S., the gopher tortoise’s habitat is feared to be shrinking due to increasing development.

“They were basically gone in Louisiana, “ O’Connor said, noting that the turtle was also disappearing from Mississippi. “Most of them they’re finding now are on the military bases.”

But the gopher tortoise is still around in the Escambia region. Their burrows can sometimes be found even in long-developed areas.

“I still see these occasionally in East Hill,” O’Connor said.

The next Science Hour presentation will be held on the other side of the new year, and will focus on the harmful algae blooms know to plague the state.