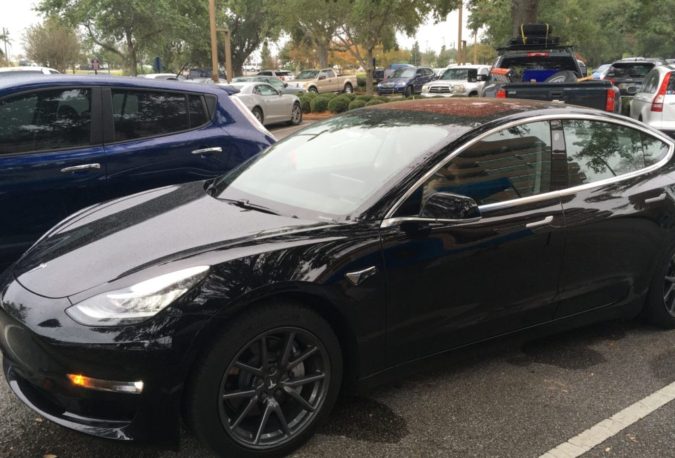 A Tesla doesn’t use gas. But it can fart.

“Oh, this is hilarious,” said Christian Wagley, pointing inside a Tesla Model 3 parked in the parking lot of Pensacola City Hall, where Dory Larsen, of the Southern Alliance for Clean Energy, has an icon of a whoopee cushion on the vehicle’s display and is conjuring fart noises from the car.

“She can set whatever seat it goes under,” Wagley said, as the sound jumps from seat to seat.

Larsen brought the Tesla to Pensacola Thursday to offer test drives and preach the gospel of electric cars, notably to municipal government. Following a morning of test drives, she made a presentation to the city’s Environmental Advisory Board.

“We’ve suggested it a number of times,” Richards said.

“Florida is very strong against drilling, but we haven’t done a lot of stuff to get ourselves off fossil fuels,” Wagley said.

A Tesla — both beautiful and, for the time being anyway, novel — tends to attract gawkers. People enjoy looking at it, soaking it in. The handles are flush, the roof is glass, the interior is simplistic, there’s no engine or transmission.

When the Tesla starts up it’s nearly silent. Around back near the taillight a small hatch quietly clicks closed, catching people off guard and making them wonder if anything on the car has actually moved. 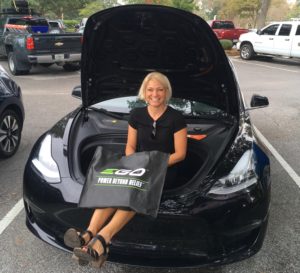 Larsen, an electric vehicle program associate with SACE, has brought this electric Tesla out on tour as part of the Driving of Sunshine campaign to try to educate the public and public officials about the impact switching to electric vehicles could have. She notes that if electric vehicles comprise between 7 to 16 percent of the market by 2035, it will offset any gain from drilling in currently protect areas in the Atlantic, Pacific and Eastern Gulf of Mexico.

Sliding into the Tesla for another test drive — this one with Pensacola Sanitation Director John Pittman — Larsen explains how kinetic energy is transferred to the brakes, causing the vehicle to effectively brake when one raises their foot from the accelerator.

“So, brake pads are almost not needing to be changed,” Larsen said.

With instructions to dig in — “I really want you to accelerate and go for it” — the Model 3 surges away from city hall. As Pittman assesses the car, Larsen lays out some electricity math.

“It cost about $40 for a thousand miles of driving,” she summarizes.

Pittman is interested in how much the Model 3 costs. Larsen says that the base model is around $35,500.

That’s not bad, but this is Tesla’s low-end offering. There’s also the Roadster, the S and the X.

“So, what’s the base price on the SUV?” Pittman laughs.

But there are also other, less exotic companies making electric cars. Larsen points no further than her own Nissan Leaf.

In the parking lot at city hall, Assistant City Administrator Keith Wilkins has parked his own Nissan Leaf for some comparison. It’s nice enough, but people tend to stay busy over in the Tesla, where Larsen has punched up some old arcade games on the large center display screen.

“It’s got all the classics,” she said, “like Astroids and Centipede.” 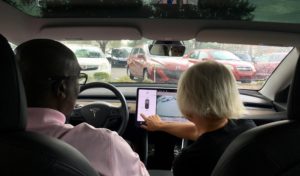 While the Tesla drips with cool, Wagley doesn’t expect the city to run out and invest in such a sexy fleet vehicle for departments like code enforcement. But he does think considering an electric option is totally reasonable.

“The city probably doesn’t need Teslas, but a Leaf?” he said.

On the mayoral transition team, Wagley handled environmental matters. Among his recommendations was to decrease the city’s use of fossil fuels. Using electric vehicles — especially if that move was coupled with something like solar powered charging stations — would go some toward lowering the city’s carbon footprint.

And while some electric vehicles may cost more than their conventional counterparts, Wagley contends that the costs saved over the life of the vehicles— there’s no gas, or big-ticket repairs like an engine or transmission job — would make the initial investment worth it.

“It’s a struggle, because everyone looks at the up front costs, but you’ve got to look at the full costs,” Wagley said.

“[The city] kind of has to lead the way, too,” added Richards, explaining that it will help the public buy into electric vehicles as a viable alternative when local governments lead by example.