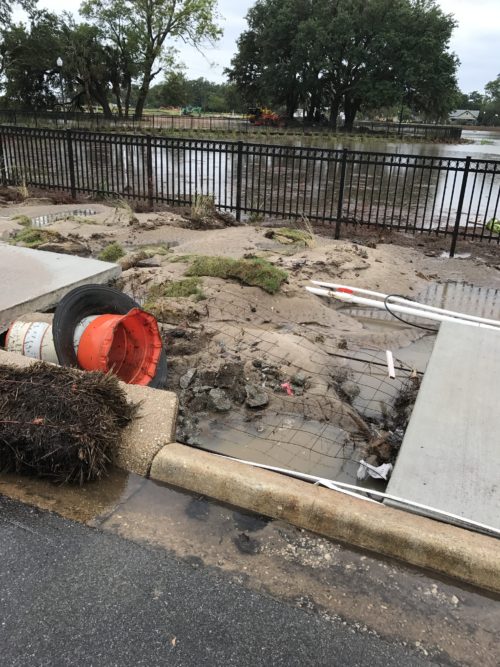 The Government Street/Corrine Jones Stormwater project continues to be plagued with problems.

The latest issue was flooding along the east side of the large pond during a rainstorm on Tuesday, June 13. The flooding collapsed a 10-foot section of the newly constructed sidewalk, exposed the footings of a black fence around the pond, exposed pipes, and caused significant erosion along Coyle Street in the Tanyard neighborhood.

In response to a request to speak to Derrik Owens, the city’s Public Works director, city spokesman Vernon Stewart issued an email statement Friday about the more than $3 million project. Stewart wrote: “The construction on the project is currently scheduled to be wrapped up around the end of July. Although the pond itself is nearly complete, it is not in full function yet and will not be until the surrounding roadway construction is completed. Once the facility is totally complete and fully online, it will help to abate some of the localized flooding issues around the park that have traditionally been a problem for the neighborhood.”

Pensacola Mayor Ashton Hayward, city officials, and private contractors have failed to reveal any details about why the flooding occured from rainfall, how long the repairs would take and how much they would cost, and how the finished design would prevent further flooding.

Emerald CoastKeeper Laurie Murphy, who is a certified stormwater inspector, said she has made a public records request for the city’s design for the pond, since Owens will not return her calls. She has a few theories of her own, including the pond is built below sea level, was dug below the water table, the streets are not raised, there are a lack of stormwater inlets and the pipes into Pensacola Bay to drain the stormwater pond are not large enough.

She suggested a dry pond should have been built instead and used plants approved by the University of Florida specifically for stormwater ponds.

“It was built more for beautification than to move stormwater,” Murphy said. “It’s going to be a constant problem.”

Jeff Helms, a professional engineer and Atkins vice president, refused to answer questions from an Inweekly reporter who showed up at the Government Street Stormwater Pond project during a Friday meeting at the site between him, city officials and the contractor, Utility Services.

“We’re aggressively trying to get the project finished,” Helms yelled, after telling the Inweekly reporter to have Publisher Rick Outzen call him.

A Utility Services representative, who refused to reveal his name, said: “We didn’t design it. We just build them. We’ve had enough of the city and enough of (Tanyard resident and public advocate) Gloria Horning.”

The Utility Services official suggested the site just needed to dry out and a wall be built to contain the pond.

The stormwater project has been hit with a series of problems from the very beginning, including contamination from lindane leaching from the county’s former mosquito plant. In humans, lindane affects the nervous system, liver and kidneys, and may well be cancer-causing. The pond is behind schedule and the latest projection is it will be finished in July.

4 thoughts on “The design of Government St. pond questioned”