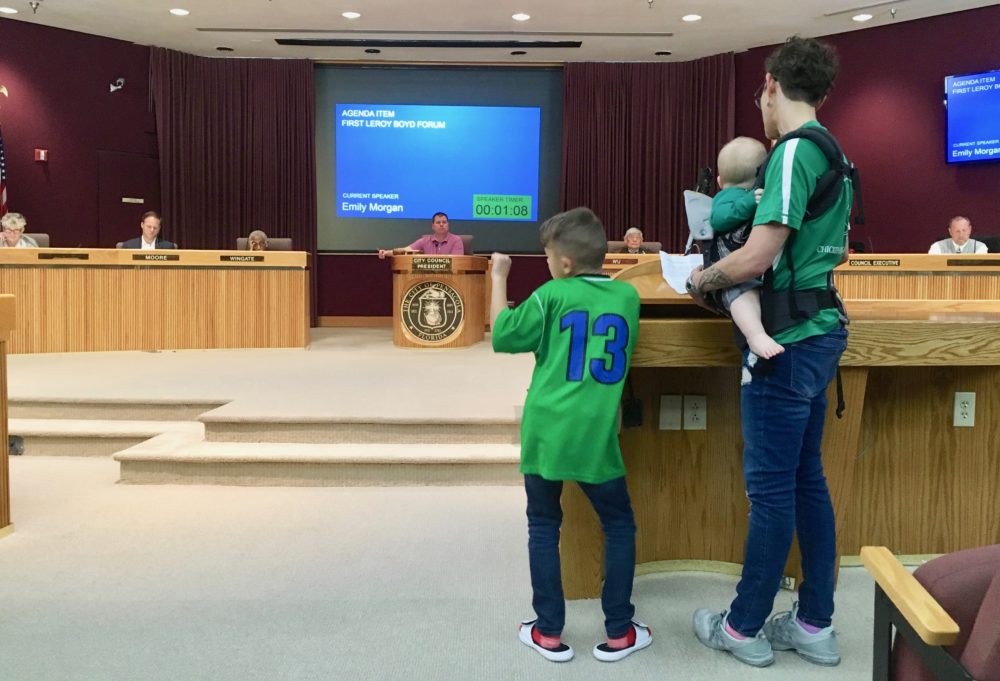 The Valentine’s Day public gallery was awash with waves of red and green for the Pensacola City Council meeting, with opponents of a planned soccer complex off of Langley Avenue wearing red and supporters of the project sporting the city league’s green jerseys.

Although council would not be formally discussing the issue Thursday, proponents and critics alike had plenty to say about the proposed complex. Youth soccer players and coaches implored the council to move ahead with the much needed complex at Hitzman Park, while some residents of the surrounding Scenic Heights neighborhood contented the project would bring unwanted change to the area.

“This is just not the right location,” said Shannon Dickinson, a neighborhood resident who has helped lead the charge of opposition.

Pensacola is currently in talks with the YMCA on Langley to work out a deal that would see the Y swap its current facility and land for a chance to move over to the city’s Vickery Center near the Roger Scott Athletic Complex, which would allow for a three-field soccer complex to be located at the adjoining Hitzman park on Langley. The city recently announced a scaled-down version of its original proposal — smaller fields, less parking, fewer trees cut down — in hopes of addressing concerns being raised by the neighborhood.

Critics of the project, however, did not appear appeased by the prescribed changes to the project. They decried a “rushed,” “one-sided” process and “lack of transparency.” They wondered why the city had veered away from an initially-proposed site for the complex off of Summit Boulevard. They don’t like the thought of the YMCA moving from the area. They pointed back to a 2005 episode, armed with old newspaper articles relaying how city officials at the time determined not to locate a soccer complex at Hitzman.

Basically, opponents of the project want city council to return to the drawing board and figure out another location for the complex.

“I don’t know why this is not as disturbing to you as it is to me,” Jennifer Brahier, a neighborhood resident, told council.

Those in favor of the complex pointed to the city’s need for dedicated soccer fields in the face of rising participation in the sport. They noted that sports are already played on the existing fields at Hitzman. They spoke about safety concerns due to the rutted, red-dirt conditions of the collective of football and baseball fields the league currently uses at Roger Scott.

Kenny Morgan, head coach for 25 years of Booker T. Washington High School’s women’s soccer team, told council the area desperately needed the complex to better foster youth rising through the sport’s ranks. His daughter, Emily Morgan — a standout player in the area who went on to play at the college level — held her baby while her son danced in his green jersey beside her, as she spoke about the impact such a complex would have on the sport and players locally.

“The impact of these fields is all encompassing,” Morgan said. “Quality soccer fields are super important.”

Also speaking in support of the proposed complex was Buck Buckley, current president of the North Pensacola Optimist Club. He spoke about the group’s founding of the park off of Langley in 1971, and how that development had also sparked concerns in the neighborhood.

“There were all sorts of people who protested it,” Buckley said. “It was gonna ruin the neighborhood.”

Immediately following Buckley, was Scenic Heights resident Paulette Drasutis: “With this action, that will be the end of our lovely neighborhood.”

While council members didn’t address the issue of the proposed soccer complex Thursday, Mayor Grover Robinson and Councilman P.C. Wu, who oversees the district encompassing the Scenic Heights area, did invite the public to a neighborhood meeting next week during which city officials will discuss the project.