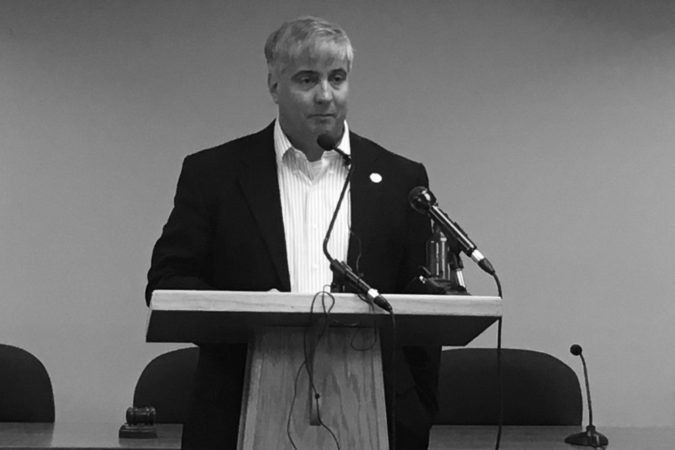 The question is recurring. The answer is always the same: not yet.

This question was asked again—shouted from the crowd — when Mayor Robinson addressed protesters at Graffiti Bridge: “What about the statue in Lee Square?”

“I don’t believe now is the time.”– Mayor Grover Robinson

But it doesn’t look like that’s likely to happen in the city of Pensacola.

“I don’t believe now is the time,” Mayor Robinson said. “That might change at some point, but now is not the right time.”

Asked about the monument Saturday following the protest, Robinson told Inweekly that he “would love to find a way to deal with our symbols and do it responsibly,” and that he was “going to give it some thought.” But he also said he would be more interested in adding contrasting monuments to balance out and add context to the existing Confederate monument.

Mayor Robinson intends to present a potential city ordinance to the Pensacola City Council that would afford protections to “sensitive property.” According to a May 20 memo from the mayor to members of city council, the ordinance will address the disposition of public property to private buyers, citing waterfront properties previously sold that could have contained archeological finds associated with the 1559 De Luna settlement.

Councilwoman Sherri Myers has expressed concern that this potential ordinance is geared toward protecting the Confederate monument in Lee Square. Mayor Robinson said Monday that is not the case.

Robinson noted that the ordinance was aimed at protecting properties associated with the city’s early European colonies, such as De Luna’s. But, he added, “it could also be applied to other properties in the historic area.”

The May 20 memo to council lays out the intent of the ordinance: “City-owned properties containing sensitive historical, cultural, and environmental resources warrant protection and preservation within the public realm.”

Yesterday, she sent this request to Council Executive Don Kraher:

I would like this project put back on the agenda for the next council meeting.I want to ask the council to set up the committee. I would like to set up some positions that will require a certain area of expertise, such as historians.

As you know I have commitments from a number of people who have already agreed to serve on the committee. I am requesting the council take applications and make a decision by the end of July and that the committee start meeting.

I am tired of the delay on this project. It has been four years.