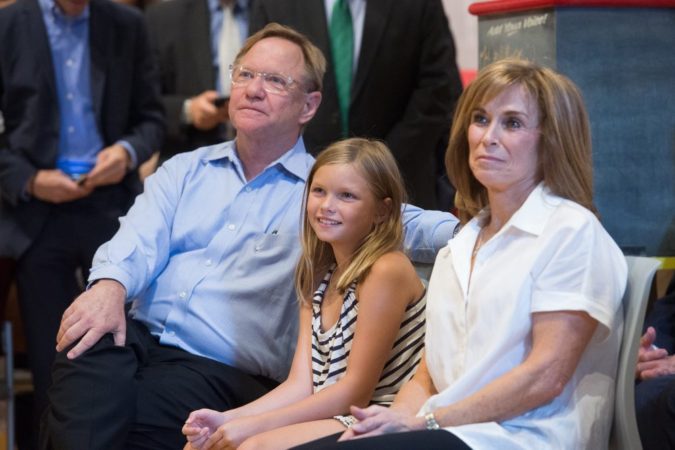 This morning, Sacred Heart broke ground on its regional children’s hospital and announced the facility will be named for the Studer family.

David Sansing, chair of the board of directors for Sacred Heart Hospital Pensacola, emceed the event and gave a history of the children’s hospital that began in women’s dormitory of Sacred Heart’s hospital.

“Once again the phenomenal leadership here at Sacred Heart has responded to a growing community need for increased access at specialized care for women and children,” he said. ” The pediatric services provided at this hospital are vitally important to the health of the entire community.”

Sansing pointed out three features of the new hospital:

“First this new children’s hospital will add more beds. With beds, regional beds we will be able to provide care for even more children, and even more specialized care than we already do. These new beds will also create more jobs for our community, creates hundreds of new jobs for the physical recovery.

“Second, the inpatient services will be consolidated into one space which will only down-play the anxiety the parents have and the children have when they come to the hospital, but also make staff more efficient, our coordination services better and our senior staff better, which is even more important.

“Lastly and most importantly we will design first and foremost for children-everything from the limited facilities to the event calendar will be designed for children. The children will not be sharing space with the adults, and this will be a hospital just for them.”

Dr. Robert Patterson, medical director of The Children’s Hospital at Sacred Heart, talked about the hospital’s leadership and how many healthcare system shy away from children services.

“To build a children’s hospital really requires sacrifice,” said Dr. Patterson. “There are many more lucrative and flashy things to do with, in healthcare and other choices than to care for children. Unfortunately, the children seem to be put aside in some areas of our country but that’s not true here.

“The members of the Ascension Health Group and the administration of Sacred Heart Hospital has come together with the amazing partnership of one of the greatest places on earth which is Pensacola, north west Florida and the community here and they pooled resources and made sacrifices with one goal. To do what is right and make a beautiful place for children.”

* Pediatric Surgery. With the construction of the new Children’s Hospital, Sacred Heart will add six, pediatric-dedicated operating rooms. This will consolidate all surgeries and procedures that require sedation into one area with a child-friendly environment designed to include family support, all with the goal of reducing stress and anxiety.

* Pediatric Oncology, with an expanded inpatient unit to provide specialized, inpatient care for children with cancer.

* Extended stay/observation beds will represent a new inpatient unit for The Children’s Hospital, caring for children who aren’t yet ready to go home.

Quint Studer told the crowd that he and Rishy were humbled when Susan Davis, CEO of Sacred Heart Health System, told them that she would like the new facility to bear their name.

“We don’t like to put names on things,” said Studer. “The new downtown Y is an exception, but we only agreed to that because other families were also named.”

He talked about the need for the children’s hospital and that raising the money for it would be a “heavy lift.” He said he hoped that the community would rally behind the effort and that other healthcare systems would help make it a reality.