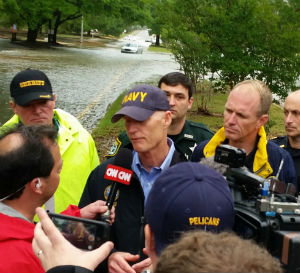 Some in the media are declaring that Pensacola received more rainfall in a 24-hour period than any Florida city ever, 15-24 inches. The impact has been devastating to our region and today we will get a better understanding of just how bad we’ve been hit.

Interim County Administrator Larry Newsom, who slept in his office Monday night while he tracked the storm, said that he and his staff will begin assessing the damage on Thursday. Mayor Ashton Hayward told Gwen Ifill PBS that he estimated the damages were “getting total up in dollars close to the $100 million mark or more.”

And all this was before the explosion at the county jail.

Tamara Fountain, Hayward’s Communications Director, emailed to the media a report from City Administrator Colleen Castille on her staff’s assessment of the damage.

Castille wrote that there had been more than 4000 calls to 911, sent to both city and county depending on jurisdiction.

There was considerable damage to the city’s stormwater ponds: