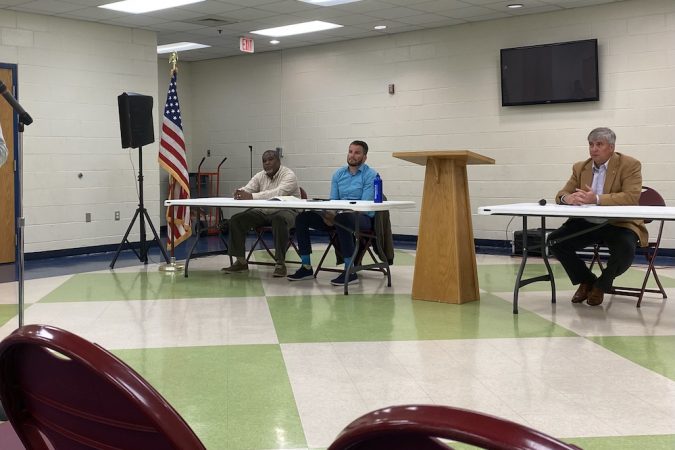 Topics traversed during Pensacola Mayor Grover Robinson’s March 1 town hall represented a variety of concerns within the city, with citizens approaching the mayor with matters ranging from red-light runners to rising power bills. It was the first time people had a chance for a face-to-face town hall with Robinson since the COVID pandemic began.

“People are ready to get back to the things where we interact with people,” Mayor Robinson said, noting the near-back-to-normal setting in the Vickery Center meeting room.

The Vickery is located next door to the city’s Roger Scott Tennis Center, just off of Summit Boulevard, where the Pensacola City Council recently decided to conduct a road diet feasibility study. This study — which will explore whether or not Summit might be a candidate for a road diet, where the lanes would be decreased to calm traffic, and the road would be made, in general, more bike and pedestrian-friendly — was one topic of discussion during Tuesday’s town hall.

“My thing is the road diet. I think that is not going to solve any traffic problems; it’s just going to make it worse,” said Kathy Millar, suggesting the city simply enforce the existing speed limit on Summit and contending a road diet would negatively impact surrounding neighborhoods. “It just creates more problems on adjoining roads that you want pedestrian-friendly.”

Mayor Robinson said he was going to take a wait-and-see approach — “I’m gonna wait and see what the study says” — but Councilwoman Jennifer Brahier, also in attendance, said that the city council wanted to conduct the study because Summit seemed like it might be a candidate for a road diet. After all, it appeared to be too much road for too few vehicles.

“You have very few cars on a very large speedway, and when you’re in that kind of situation, it’s kind of like the Autobahn: you can’t hold yourself back,” Brahier said.

The councilwoman contrasted Summit with a similar stretch of nearby Langley Avenue for some comparison. Langley, a two-lane route, sees about 13,000 vehicles per day, whereas the four-lane Summit only sees around 5,600 vehicles each day.

Another nearby resident was also concerned with traffic issues in the city. Mike Horrigan told the mayor that he felt there was an abundance of drivers running red lights in the city: “We’ve just got to control the red-light runner.”

Horrigan also expressed concerns about the city’s approach to the issue of homelessness, saying that he felt the city was too focused on social-service-type solutions at the expense of “enforcement.”

“It’s gotten out of control,” the man said, urging the mayor to do more than the city’s current efforts to find homeless individuals shelter and put them in touch with relevant service providers and begin removing them from public spaces: “I like to drive around and see a pretty city.”

Mayor Robinson said that he felt the city’s current approach — spending federal funds to create additional shelter opportunities — would soon pay off. If homeless individuals ultimately did not accept these shelter and service options that will become available, he said, then they would be asked to leave the area; this is key, as the city risks a lawsuit if it forcibly evicts homeless people from public spaces without being able to offer an alternative shelter option.

“I think really, for the first time, the city has a plan to take care of it,” Robinson said.

The town hall’s most impassioned comments came from Melina Jones, who expressed concerns about rising power bills in the area since Florida Power & Light took over operation from Gulf Power earlier this year. City officials are well aware of these concerns in the community, and the rising-rates issue has played into a recent discussion concerning the possibility of starting a municipal utility company.

“Do you understand how many more people are going to be homeless because of the light bills?” Jones asked the mayor.

The woman said that she knew multiple individuals struggling to pay their power bills and implored the mayor to take action on the issue.

“I know a lady right now; her light bill is higher than her social security,” Jones said. “What am I gonna do when that happens to me?”

As Jones gathered up her belongings and exited the meeting, Mayor Robinson would explain how “we don’t control the power company.” Jones probably didn’t hear much of that, but it probably didn’t matter as she had already written off any response as rubbish: “anything you are saying still ain’t gonna add up.”

Though Jones was gone, the mayor continued to discuss the issue of rising power costs. He repeated his reservations regarding the municipal utility option and also provided a list of resources to which people can seek assistance paying their power bills.

Additionally, Robinson said, though the city plays no direct role in setting rates for FP&L customers, the mayor and City Council President Ann Hill have contacted the Florida Public Service Commission, which does approve the rate structure, and asked them to reassess the rate approval process.