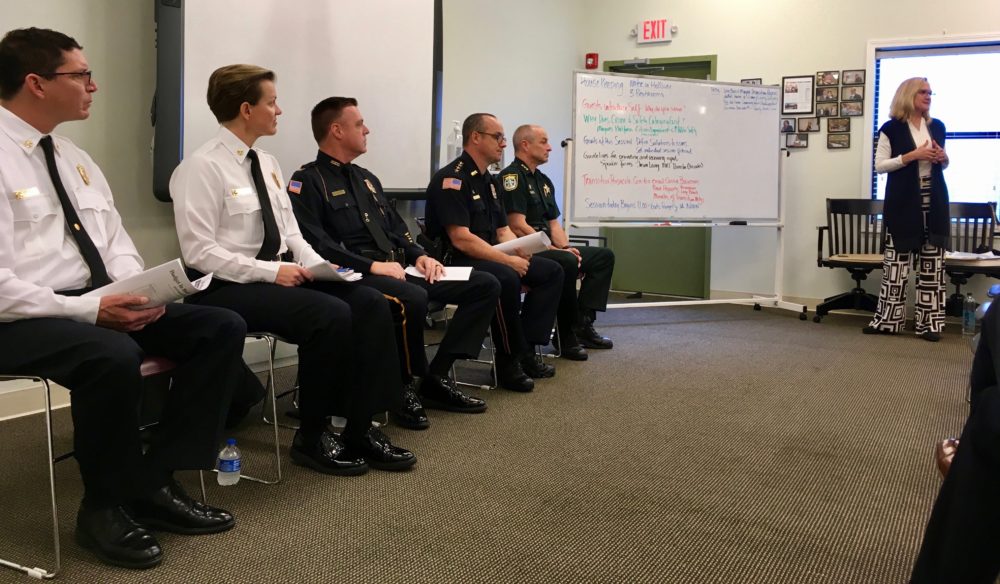 –Pensacola citizens had the opportunity Saturday, Dec. 29 to let the city’s administration know their thoughts concerning the community’s public safety. The meeting at the offices of Pathway for Change was part of Mayor Grover Robinson’s transition team’s efforts to get the public’s input on a wide array of issues.

Both Pensacola Police and Fire have staffing shortages.

“You are seeing holes in our system. What are they? But, also, let us know, what are the solutions?” Connie Bookman, transition team member and founder and CEO of Pathways, kicked off the session.

Over the course of an hour, local law enforcement and fire safety officials fielded questions and comments. The couple of dozen people gathered for the meeting wanted to discuss issues like derelict properties, traffic safety and emergency operations.

One concern brought up during the meeting was the issue of traffic accidents involving pedestrians, particularly on streets like West Cervantes, where people are faced with crossing four wide lanes of cruising traffic.

Chief Lyter acknowledged that routes like West Cervantes Street present challenges for law enforcement. He noted that the areas on either side of the street are largely low income areas of town with a high number of minority citizens, and said the city did not want to focus on any sort of punitive measures aimed at curbing pedestrian crossings.

“They barely have the means to pay for groceries,” Lyter said. “I don’t want to write them a ticket for jaywalking.”

The chief said that the police had previously stepped up ticketing of drivers in the area for speeding, but that the effort had little impact on the number of accidents. He said one tactic with some amount of success was running a patrol car up and down Cervantes to serve as a “pace car.”

“They just drive Cervantes Street,” he said. “No one’s going to pass a police car.”

One woman in attendance at the input session told the panel of officials that she was having a problem with a neighboring property that had been abandoned and fallen into disrepair. The woman, a resident of the Tanyard community near downtown, said she understood that the city’s code enforcement had exercised the extent of its authority and wondered if there was anything local law enforcement might be able to do.

“People are going in, grabbing things,” the resident said, describing how the property was attracting trespassers. “Quite frankly, it’s concerning.”

The panel didn’t have any comfort to offer, as they explained to the woman that there was little they could do when it came to such properties. Lyter relayed how he’d recently encountered one abandoned property, with no water or electricity, where 16 people were living.

Another person in attendance at the forum was interested in how the city’s new development, particularly residential developments downtown, would impact the fire department. The man was curious if officials were concerned about what he referred to as “lightweight construction.”

“The new housing does tax us as a fire department,” Chief Cranor said, explaining that some of the construction wouldn’t weather a fire well. “They’re never meant to be on fire. You really have a five to 10 minute benchmark to remove the heat from it before it falls on you.”

Bookman pressed on this point, wondering if the fire department had enough firefighters to deal with potential events in the city.

“So, how many firefighters do you need if Southtowne is on fire?” she asked, referring the downtown’s new mixed-use development.

“For Southtowne we really are looking at 43,” Cranor said, citing national standards.

The fire chief said that pulling together that number of firefighters would require “a lot of mutual aides,” meaning the city would need to request help from Escambia County and other neighboring fire departments. Currently, Cranor said, the city has 28 firefighters running on a given shift.

“We can get 15 firefighters to a scene immediately,” she sized up the city’s limits.

Assistant Chief Jester added that some of the city’s new developments would need to be approached with a “big city” mentality. He explained that this meant firefighters would sometimes be better off focusing on extinguishing a fire rather than focusing on rescues from that fire.

After noting the potential staffing shortfalls within the fire department, discussion turned to the police department, where staffing is also a concern.

The chief said that the department was about 30 officers shy of what it needed, and that was forcing the need to work people overtime and leading to “burnout” issues.

“It’s been described as relentless,” Lyter described the department’s current workload and officer shortfall, adding that the department receives between 270 and 300 calls for service each day and finds the need to prioritize which calls get attention.

“To hear you might not be able to pick up my call,” Bookman said to Lyter, “that makes me nervous.”

Bookman will be taking the afternoon’s public comments and information from the officials back to the transition team, which will incorporate the findings into a report containing recommendations concerning public safety, as well as other aspects of city operations, for Mayor Robinson to consider.