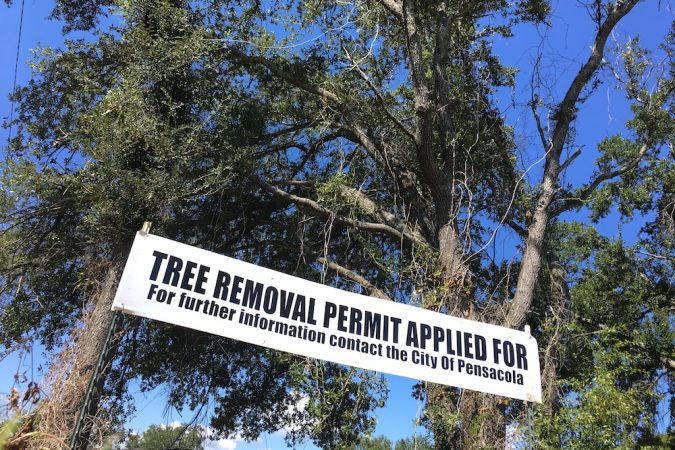 The Pensacola City Council will be discussing revisions to the city’s tree ordinance this week. Councilwoman Sherri Myers has long pushed for modifications in the tree ordinance, but she’s not thrilled about how this current discussion landed on the council’s table.

“The tree ordinance — wow,” Myers said recently. “The process here has been really, really screwed up.”

According to the councilwoman, her efforts concerning tree ordinance revisions were passed over in favor of revisions proposed by city staff. It was a process Emerald Coastkeeper Laurie Murphy, also working independently on revisions, described as “a little sneaky.”

“My efforts were basically kicked to the curb by city staff; that’s how I feel about it,” Myers said.

Eventually, Myers said, she “made such a stink about it” that city staff incorporated some of the councilwoman’s work; of particular interest to her was ensuring adequate notice of a developer’s intention to cut trees is provided via posted signage. Councilwoman Jennifer Brahier is also a sponsor of the ordinance revisions.

Aspects of the tree ordinance revisions being addressed by Murphy — details like tree-diameter specifics and what constitutes a heritage tree — are not being included in the revisions council will discussing.

“We’re going to pull it off the table right now,” Murphy said, explaining that the pandemic has hamstrung an arborist team from the University of Florida that is involved with the work.

“When people hear ‘tree ordinance,’ they think, ‘ok, you’re going to be working on the diameter of a protected tree, or what’s the definition of heritage tree or things like that — this is not that yet,” said City Administrator Keith Wilkins. “Not that it’s to supplant, because it’s not supplanting protections standard.”

Mark Jackson, the city’s sustainability coordinator, describes the revisions on the table as an attempt at “streamlining” to realize “a more efficient process.”

“Make it to where the public is no longer confused,” Jackson said. “Before, it was multiple departments and different people that you had to go to. With this streamlining effort, we’re trying to get it down to as few loose ends as possible.”

For that larger conversation about diameter size or heritage tree definitions or things like replanting efforts, Jackson said the city needs first to do some groundwork, such as taking a tree inventory and conducting tree-canopy mapping.

“After both of those efforts, develop essentially an urban forest management plan that would then mold what the new ordinance would kind of look like, what an updated ordinance would look like,” he said. “We have to set standards of what we want and how we want it to look. And if we don’t even know what we have, it’s hard to say, ‘this is what we want, and this is how we get there.’ And currently, we don’t have a very recent canopy cover or tree inventory. So, we want to update those because that way we can really go out there and say ‘this is what we want as a city.’”

That kind of effort could take a while.

“It’s a long effort, and it’s not something that we can just snap our fingers and make happen overnight, it’s going to take some time and some studies and putting in some effort and getting out in the community and understanding what the community wants,” Jackson said.

The Pensacola City Council will discuss the current tree ordinance revisions Monday during its agenda conference, then again during its regular meeting Thursday.