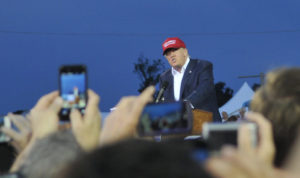 A new University of North Florida statewide poll of Republican primary likely voters reveals that if the Republican primary were held today, Donald Trump would garner the most votes with 21.7 percent. The poll shows Ben Carson closing in with 19.3 percent, while Marco Rubio comes in third with 14.9 percent and Jeb Bush at a distant fourth with 9 percent of the vote.