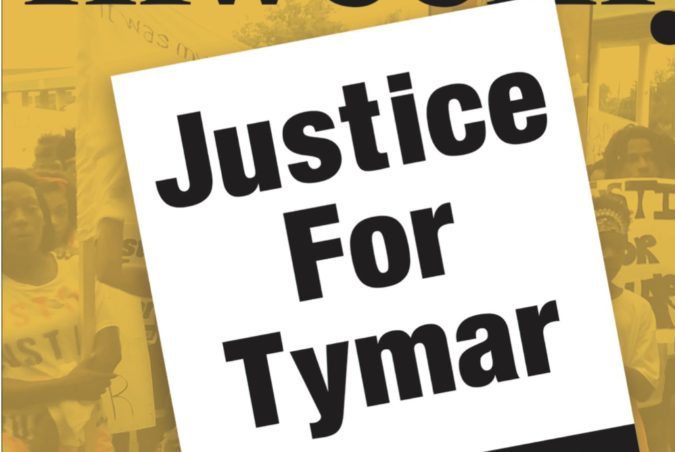 On Monday night, approximately 50 people gathered around the bust of Martin Luther King, Jr. to express their anger with police violence against women of color. Known as the “Day of Outrage,” the nationwide event was held in over 2 dozen cities to protest the shooting death of Atatiana Jefferson by a police officer in Fort Worth, Texas. The 28-year old Jefferson was shot and killed in front of her nephew during a routine wellness check not long after the two finished playing video games in their living room.

The Pensacola event marked Jefferson’s death, but also served as an open forum for those angry at last Friday’s news that the Escambia County Grand Jury recommended Detective Daniel Siemen not be indicted for the shooting death of Tymar Crawford.

On July 5, Crawford was pulled over by Detective Daniel Siemen. As he was exiting his vehicle, a scuffle ensued, and Crawford was tased and shot 7 times in his yard in front of his partner and children. The shooting death led to months of protests led by the Pensacola Dream Defenders. After an internal review, the Pensacola Police Department announced on October 3 that Detective Siemen was fired for violating the department’s use of deadly force, use of physical force, and use of force policies.

After Siemen’s termination, many activists saw this as a sign that Detective Siemen would be indicted for killing Crawford. The October 25 announcement by State Attorney Bill Eddins that the Escambia County Grand Jury did not recommend indictment brought shock and anger to many in Crawford’s community, as well as those concerned about police violence. The timing of the “Day of Outrage” and last week’s ruling was coincidental, but the event served as a platform for those who wanted the opportunity to speak on the issue.

Organized by the Pensacola Dream Defenders, the “Day of Outrage” began with a prayer by Jamil Davis, an organizer with Dream Defenders. In his opening prayer, Davis said “we call for reconciliation for our people—who have faced 400 years of oppression and enslavement in some form, shape, or fashion— and brutality by a system that was built on racism and white supremacy.” Davis’ prayer called for accountability within the city’s government and a healing for those who’ve been affected by violence.

Davis closed his prayer by adding, “We cannot reform a system [that has a] foundation that has already been built on broken and tattered disarray.”

Dream Defender organizer Ieshia Williams then took the megaphone and read from the organization’s mission booklet, “Freedom Papers.” Williams said, “We deserve better…We deserve real safety over our cities, our states, our homes, our schools, our workplaces, and our community centers. By virtue of being born, each of us has an absolute right to people-centered humane justice.”

Until Freedom, a national social justice organization, originally called for the “Day of Outrage” to “Demand justice for Atatiana Jefferson and the countless Black women killed at the hand of police violence.”

Local organizers throughout the country tailored their events to address the issues of each community. Members of Dream Defenders and the NAACP read the names of African American women, young and old, shot and killed by police officers. Readers also told their stories, including that of Atatiana Jefferson, along with many more.

Ellison Bennett, former president of the Pensacola chapter of the Southern Christian Leadership Council, was one of the last people to speak.

“I came here today to support the Dream Defenders and Tymar Crawford’s family,” said Bennett He was far from alone. Also present were several representatives from Pensacola’s civil rights organizations—including the NAACP and Movement for Change—as well as members of Crawford’s family.