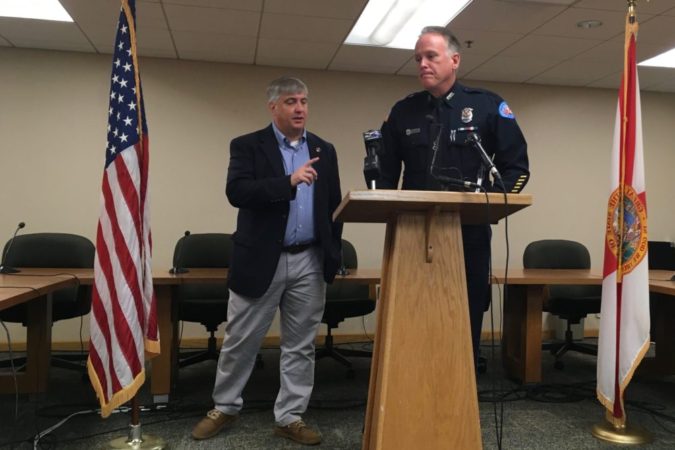 Pensacola Mayor Grover Robinson declined for months to view the video of a July incident during which a Pensacola Police Department officer shot and killed a citizen. He finally saw the video, along with everyone else, on Friday following the conclusion of the grand jury process.

“I think, after seeing the video, the Pensacola Police Department did everything, the right thing, with the termination of the officer involved,” Robinson said during a Monday morning press conference.

While Detective Daniel Siemen, who shot and killed Tymar Crawford following a traffic stop, was fired earlier this month following an internal PPD investigation, the grand jury has concluded that Siemen should not be charged criminally.

Asked about the seeming incongruency between PPD terminating Siemen — he was fired for breaking the department’s use of deadly force policy — and the grand jury’s finding, PPD spokesman Officer Mike Wood referred back to the video of the incident and reiterated the mayor’s position.

In the recently released PPD video of the July 5 incident, a wrenching scene plays out in which Crawford grapples for one officer’s taser and is ultimately shot at close range — seven times — by Siemen. Wood said that Siemen’s is appealing his termination, a process that involves filing a grievance and the city deciding the merits of the appeal.

Officer Wood said that PPD has not made any decisions yet pertaining to the grand jury recommendations that accompanied its finding. Recommendations centered on training.

“The training that our officers have is very good, it was just accredited,” Wood said, explaining that the department was open to additional training, but that he didn’t see it as relevant to the Siemen incident. “What you have here is a good officer who made a bad split-second decision and nothing more.”

One of grand jury recommendations addressed PPD’s policy of allowing individual officers decide if they will carry a taser, which provides them with a form of non-lethal protection. Wood said that while patrol officers are “highly encouraged” to carry tasers, other officers — Siemen was a narcotics officer — were left to decide which form of non-lethal force they preferred to arm themselves with.

“Whether it’s pepper spray, a baton, a taser, it’s what the officer is comfortable with,” Wood said. “But, again, most of them do carry tasers,”

City Attorney Susan Woolf said that the only contact the city has had with the attorney representing Crawford’s family involves a lawsuit over a public records request for the now-released video. She said there had been no discussions regarding any further legal action.

“He has not indicated whether he’s bringing any other lawsuits at this time,” Woolf said.

“We understand that it’s been a difficult process for everyone,” he said.

Asked how this incident has impacted PPD, Woods said that fellow officers sympathized with SIemen, while also recognizing his misstep.

“The officers, they feel for Detective Siemen,” he said. “We do, too,”

Wood also said he thought that the PPD’s reaction to the incident reinforced trust between the department and the community they serve.

Admiral LeRoy, an African-American and publisher of Out Front magazine who was present during the Monday morning press conference, took issue with Wood’s assessment of the police department’s relationship with the black community. He found it particularly disturbing that Crawford had been shot seven times.

“As far as the black community trusting the police? That’s not happening,” LeRoy said, adding that an incident like this further exacerbates the relationship.

Mayor Robinson said that he understood the city had work to do.

“Mr. LeRoy, I agree, this incident does strain relationships, and it’s going to be up to us to improve things,” he said.

The community organization Dream Defenders has scheduled an event this evening for downtown Pensacola in coordination with a national Day of Rage. The event is a protest against police brutality — specifically addressing the recent death of Atatiana Jefferson, who was shot in her home by a Fort Worth, Texas police officer — and is expected to serve as venue for a community reeling from Crawford’s death, the grand jury’s decision and the images of the recently released video.

Wood said that PPD supported people’s right “to gather, to protest, to have their voices heard,” and that law enforcement’s role at the event would be the same as at “every demonstration, every gathering, every parade.”

“We will tolerate no violence and no property damage, but anything besides that, we’re certainly behind them and have no problem with them having their voices heard,” Wood said.