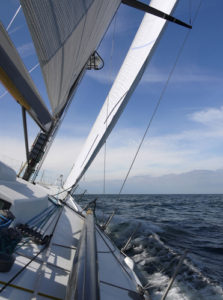 Pensacola, FL, November 2, 2015: The 2015 Andrews Institute Pensacola a la Habana Race saw four retirees in the first 24 hours. The next 12 hours brought just one more withdrawal. Mike Beard’s Tartan 37 ‘Kanaloa’ from Pensacola broke a lower shroud chain plate below the deck on the port side. The plate was threatening to pull through the deck so it was time to turn on the iron jenny and head for home at 2:38 PM Sunday.

Beard said the conditions were “rough” and “wet” but not unbearable. They were 101 miles south of Pensacola when they discovered the cracked and broken metal plate and had passed Pensacola Yacht Club [PYC] and returned to the boat’s slip behind Beard’s house in Bayou Chico in time for breakfast Monday morning. Beer, hot tub and cleaning up the wet boat were the order of the day.

Beard said, “Winds were up and down from 3kts to 30kts. We didn’t have wind instruments so that’s an estimate. Seas were 5-7 feet. Heading into those seas would have put a lot of pressure on the rig and in an older boat like ours that can lead to trouble.”

“We still have our rig up,” Beard added. “We didn’t want to risk loosing that… the upper shroud is connected to part of that same chain plate backing, so continuing to sail even though conditions were getting better would have been risky. If the uppers had broken the mast would have gone over and we would have lost it all.”

“We still had 400 plus miles to go down the rhumb line [direct course to Havana] and a 90 mile Gulf Stream crossing to make on the way before reaching the finish line. Much too risky,” Beard remarked.

The Gulf Stream, which pushes up the Atlantic across the tracks for the Charleston, Annapolis, Newport and Marion to Bermuda races, starts as a current that pushes north between Cuba and the Yucatan area of Mexico. The current sweeps north and then loops south along the coast of Florida giving sailors a boost of up to 3kts going towards Cuba.

The section of the stream between Dry Tortugas and Cuba can be rough because the eastbound current collides with the prevailing wind from the east and stacks up choppy waves.

All of the boats still on the course were having a wet go of it. The two boats closest to Cuba had been in contact with the race organizer’s communications team and their home base followers. The J-130 ‘Lesson #1’ has not been showing up on the ‘Kattack’ tracking page on the race internet site www.cubarace2015 since the race started.

‘Lesson #1’ reported good progress but their alternator has failed so they are conserving electricity. They are not using their electronics, so they are navigating the old fashioned way. They estimate finishing at Marina Hemingway tomorrow night.

Early on Monday morning they posted this on https://www.facebook.com/CubaRaceLesson1/—
“All OK, we have had some technical difficulties and discovered our new alternator has failed. Power is scarce and we are running a trickle charge from a solar panel. All is well though and have crossed nearly 180 miles towards our destination. Sailing 6.5 knots towards 120°. Onwards… about to hit the Loop Current.”

The little Corsair 31 tri ‘Bellafonte’ was really wet. Early Monday, Larry Bowyer of race communications talked to newlywed Mandy Johnson whose husband David is on board. She was concerned and found they were taking on water, but able to keep up with it, They still plan to continue to Cuba. The water— two feet or so from waves splashing into the small boat’s hulls— has damaged electronics and batteries. They are still tracking east, going close to St Pete. They planned to tack back towards the rhumb line later today [which they did]. Mandy and Bowyer are going to check in with them frequently during the day and night via sat phone.

Bowyer was in contact with US Coast Guard (USCG). They talked with Mandy who was the last to contact ‘Bellafonte’. Mandy understood the water was coming from waves and not a hull leak. Although ‘Bellafonte’ can take on water during rough seas, they are not continually pumping. The USCG will continue to monitor their progress; they are not sending a vessel out to check on them. If the Race organizers become concerned, I will re-contact the USCG again.

Mandy & I are talking,” Bowyer said. “So if she hears from her husband she will contact me and vice versa.”

Experienced racing sailor Rick Zern said, “Having sailed on that particular boat over the last two years and that design of boat over the last 15 years, I would speculate that the water intrusion into the main hull is from waves. The Amas (pontoons) tend to take on water from the hatches and must be bailed every time one can get in on the high side. We took on a good bit of water in the Gulfport to Pensacola Race and it was downwind most of the time. I am not surprised they are taking on water in these rough upwind conditions.”

Land-bound spectators can track their favorite boats in the Andrews Institute Pensacola a la Habana Race. Each boat has a position transponder broadcasting its location. The monitoring system is called “Kattack”. It is online through the event website http://www.cubarace2015.com and click on the boat tracking tab and go to
http://kws.kattack.com/GEPlayer/GMPosDisplay.aspx?FeedID=1498
In rough conditions, the tracker connections may be intermittent, so be patient.

The original Havana Race was sailed from St. Petersburg, FL when 11 boats hit the starting line on March 30, 1930.The competition grew in size and stature to be a favorite of Gulf Coast sailors. It became a preliminary to the famous Southern Ocean Racing Circuit and attracted top yachts from the Americas and the international scene. Then bullets started flying at masts, and Castro overthrew the Cuban government, so the race was discontinued in 1959. See more at A History of Pensacola Yacht Club’s Involvement with the Havana Race prepared by Tom Pace, Jr. at http://www.cubarace2015.com

Title sponsorship for the Pensacola a la Habana Race has come from the Andrews Institute headquarterd in Gulf Breeze, Florida. Local sponsors include Zern Rigging, Schurr Sails, Weather Routing Inc, GeoSyntec, and Technology Associates, Inc. The regatta is supported by the Pensacola Sports Association and The PYC Satori Foundation, a new not-for profit organized to support maritime education and activity for a diverse cross-section of Northwest Florida youth and the general population. The Pace Family of Pensacola has also supported the race through a generous donation to the PYC Satori Foundation.

The Castillo del Morro Race: Friendly Competition
One important goal of the new Cuba race is to establish friendly, amateur athletic competition between the US sailors and the people of Cuba. Once in Cuba, the Pensacola a la Habana racers will be joined by local racers and other boats mooring in the Hemingway Marina in The Castillo del Morro Race.

The race is scheduled in Havana for Friday November, 6th. It will have a course that will be from the Almendares River mouth – entry buoy to Havana Harbor- Hemingway Marina. This course is spectator friendly for the Cuban people and US spectators traveling to Cuba. The boats will leave the Hemingway Marina for the starting line at 9:00AM and the start will be approximately 11:00AM local time.

The trophy presentations for the 2015 Andrews Institute Pensacola a la Habana Race and the Castillo del Morro Race will be at 7:00PM at the Hemingway International Yacht Club.

More information is available at http://www.cubarace2015.com