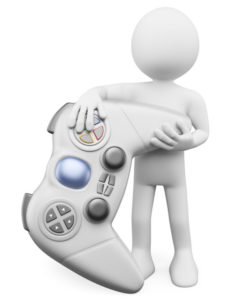 My 6-year-old daughter is bright, happy, and, like many children, loves media. She has always loved books and movies, and she is beginning to explore video games. She likes fantastic stories, but rarely pretends to be in them. She enjoys quoting from her favorite movies, but doesn’t dress the part. In short, she is not prone to “wearing the skin” of fictional characters.

Tonight, she was playing the video game “Tangled,” based on the Disney film. It is a clumsy game, and is nearly non-functional without someone playing as Flynn Rider, Rapunzel’s “Player 2.” As my wife hacked another set of hedges from their path, my daughter said, “Thanks, Flynn!” I began to listen more closely. “I have to swing up there – you can’t do it, only me.” “Ouch!” She was identifying with her avatar.

As my daughter swished her remote and hopped slightly when pressing the “jump” button, she wasn’t simply watching the events play out; she was living them. It is safe to assume that games with far superior graphics, mechanics, and user interface have a similar effect. For many games, it is certain, and intended, that players feel a visceral and emotional connection to avatars that they themselves direct in conducting horrific violence. The idea of boys and girls living these experiences gives me great pause.

Violence has always been a part of video games. Mario squishes his enemies into oblivion, and the Galaga hero blasts hundreds of baddies into space dust in a sitting. I also read Vietnam fiction in middle school and have seen Obi Wan Kenobi slice off that nosey alien’s arm more times that you could count. All of this is beside the point. The games in question are different. We could spend pages discussing character motivations, first-person perspective, slow-motion kill cams, realistic gore and death animations, or the vanquishing of actual human foes, both in character design and in multiplayer modes.

But many video games have more in commons with The Odyssey than Kill Bill. Fans of the Mass Effect series became enraged by the narrative conclusion of the epic trilogy. Hyper-violent games like Spec Ops: The Line and Bioshock draw from Heart of Darkness and Atlas Shrugged, respectively, to subvert their violent mechanics in the name of powerful, enlightening experiences for the player. Even The Walking Dead, a video game based on shooting zombies is being lauded by critics for the touching, realistic relationship between the main character and the young girl he is trying to keep safe. These games leverage violence in service of deeper, more noble goals. That said, many games invert the formula, which is to say, they are exactly like Kill Bill.

The censorship of video game violence generally should be off the table. In quieting gratuitous fare like Mortal Kombat or the Call of Duty series, we would be deprived of SpecOps: The Line and Bioshock, which are as valid in terms of art and expression as Bonnie and Clyde or The Naked and the Dead. Not to mention that gross censorship would be unconstitutional. We cannot lose sight of the first amendment in defense of the second.

What should be on the table is children’s and young adults’ access to these experiences. President Obama has called for externsive research into the influence of violent video games. This newly funded research will be years in the making, and likely inconclusive.

As a response to the Sandy Hook massacre, or the Aurora theatre shooting, or Columbine, video game research is a fool’s errand. The President calls for common sense measures related to gun accessories and background checks. He, and others, recite the old trope that saving “even one life” would validate the effort. And yet, when it comes to video games, we place an order for more research. Let’s apply the same common sense and the same “even one life” standard of success to video games. I don’t need research to know that my children shouldn’t see Saving Private Ryan, or The Deer Hunter, or Kill Bill until they are mature enough to understand not only the reality of what is depicted on the screen, but also the themes that the filmmakers are trying to convey.

We do not need research to tell us that children should not be directing violent, hypermasculine avatars equipped with real-life weapons in the brutal, graphic, and gratuitous killing of very realistic human targets. Even worse, most players essentially ignore the single-player story mode in games like Call of Duty, spending almost all of their time in multiplayer modes, which are largely devoid of moral purpose. At least the story mode calls for violence against shadowy terrorists! Multiplayer communities are infamous for the bigoted, graphic, and aggressive language players use to taunt their online “enemies.”

I don’t believe that video games should be blamed for gun violence. Just last night I laid low a whole garrison of enemy bad guys, and I went about my work today with nary a homicidal impulse. But video games need not be the cause of Sandy Hook-style evil to be scrutinized. Too many developing young people are “wearing the skin” of violent video game characters, and are probably the worse for it. That should be enough.