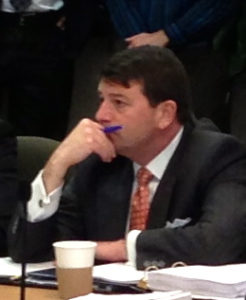 Inweekly had the video of the City Administrator Bill Reynolds’s presentation at the May 2012 Committee of the Whole transcribed.

Here is the transcript:

Dr. Pratt: Thank you, Mr. Vice President. I just wanted a little explanation on this. I know that we have the Hollice Williams grand scheme and I guess it sounds like it’s about a twenty year rights that they would have. Is this something that is needed? It would be great if that space could actually be opened up to public, but the radio tower would be difficult.

Mr. Reynolds: Thank you Mr. Vice President, and thank you Councilwoman Pratt. This has been quite a history lesson for me with this particular tower. I’ve spent a lot of time, actually I think this was probably one of the first things that came across my desk, was the tower issue. I’m sure some of you know more about this than I do, but essentially this tower has been in place for quite a period of time. It has been used by the radio station and is in the process … It desperately needs to be replaced. Either we replace it or we don’t.

It is currently city property because under the initial lease it became city property after a term of period. It is in danger of … It really is a hazard. It’s located inside the Storm Water Facility, if you will, and it’s fenced in in the Long Hollow Storm Water area.

The land can’t be used for anything else, and the only reason it is allowed to used for a radio tower is because it is currently there, so recognizing that prior councils had determined not to take action on whether or not to do anything with the lease, the lease over the years has just been regenerating per the original lease agreement. The current funds that the city receives for that is two hundred dollars a month.

This has been sometime ago that this has all been in play, and as we looked at it we recognized that we have a safety issue with the tower at this point, it can’t be used for anything else, and frankly the city was not getting its fair recompense based upon where we are today and the value added that it brings.

Essentially the question then is for this council whether we as the tower owners take the tower down, which frankly would cause a hardship to the radio station because where it is located apparently is one of the prime radio location places. Go figure.

I’ve learned a lot through this process. Or not, and essentially what we’ve done, if it’s the council’s desire to put this forward, we’ve structured a lease that has both the city well protected, is receiving it’s fair recompense for the property, and then also is assisting the radio station.

VP Townsend: Any other questions from the council? … Audience? … Ma’am?

Ms. Dubusson: In reviewing the materials that were provided, it appeared that the city obtained title to the earlier one after only five years of the lease agreement, and this a twenty five year lease; at any point, do we as a city get titled to this, or are we just going to be leasing the space and they will retain title? I understand this is a Birmingham station so, I was just curious if there was any effort made to get the city to end up with ownership of the tower once it was built.

Mr. Reynolds: We don’t want ownership of the tower, frankly. We currently own the tower that is about to fall – well about to fall down is probably not a good statement – but certainly has structural issues.

We’re not in the tower business, and the good part about this, and part of the way we specifically crafted this lease, and by the way I am the individual that crafted this particular lease, the reason we did this was to ensure that the owner of the tower continued to retain ownership throughout the period, because as it stands right now we are responsible for that tower.

In the future, we don’t want to be responsible for the tower, and so even when this lease is up and there is no action by council to re-up the lease or to negotiate a new lease, then the individual corporation is responsible for removing everything out of there. So, it is actually in the city’s best interest not to have ownership of the tower.

Robert Hill: My name is Robert Hill, from 980 WRNE. We recently joined in a partner with Mr. Church and his radio station. As you may know I own and operate WRNE and for the past year, year and a half we are in a upgrade procedure and we are relying on the tower being replaced so we can upgrade our facility so we can better service Escambia, Santa Rosa, Okaloosa county. We would greatly appreciate any consideration the council can offer us. Thank you.

Ms. Myers: Yes. Given the nature of this lease and this property, I just wanted to ask if the city attorney has looked at the lease?

Mr. Reynolds: If I may, I don’t know if the city attorney specifically has looked at the lease, but both the deputy city attorney and our purchasing office have looked at it and reviewed it as well, providing necessary language that was required.

Ms. Myers: The name of that attorney?

Ms. Myers: Okay, thank you. She participated in drafting the lease?

Mr. Reynolds: She participated in drafting portions of the lease. She reviewed and had recommendations in regards to things that we needed to do and could do to bring it into compliance as well.

Ms. Myers: Okay. Has she reviewed the final draft that’s before us today?

Mr. Reynolds: I believe she has, but I’m not sure. But again, I would remind council that I’m also an attorney.

Ms.DeWeese: Thank you, Mr. Vice President. I seconded this but I had some of the same concerns Dr. Pratt had with the Long Hollow. The project for the Greenway Hollice Williams at Long Hollow is a great part of that, and this part of design is to be opened up eventually for a promenade and some of the neighborhoods to the north actually would access the whole Greenway from that area. I understand, I am actually looking at a satellite, there’s a great deal of space where this is sitting and it couldn’t be used for other things, but have we discussed or looked at the issues of eventually opening this area up if the basin is actually redesigned sometime in the future.

Mr. Reynolds: Thank you, Mr. Vice President. I have been advised by our publics works department that this land cannot be used for anything else, period. The only reason that it can be used for this is because there was a preexisting tower there.

VP Townsend: Thank you. Okay, any other comments? All in favor?