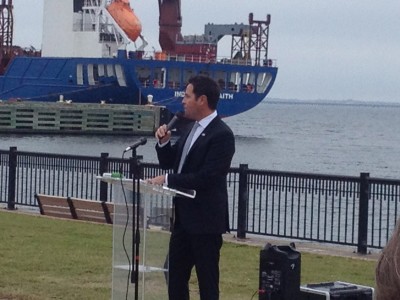 When Ashton Hayward took office, the future of the Port of Pensacola was an issue. Six years later, the Port is struggling and its viability in doubt.

In 2011, Mayor Hayward appointed a blue-ribbon Port Advisory made up of John Myslak, Bill Greenhut of Greenhut Construction, Debbie Calder of Navy Federal, Dr. Rick Harper of UWF and banker Blaise Adams. The advisory issued its report in November 2011 that recommended the mayor pursue the offshore-service industry.

Three years later as Mayor Hayward prepared for his re-election campaign, the City announced a deal with Deepflex, which would create 100 jobs (average annual pay $60K) and was “in sync with the Pensacola Port Advisory Committees’ recommendation to the Mayor that offshore/subsea business development be the focus of Port asset usage.”

When Mayor Hayward announced the Deepflex deal at the port in the spring of 2014, crude oil hovered around $100 a barrel on the NYMEX. Currently the prices are less than $50 a barrel.

Last fall, City Administrator Eric Olson finally admitted the Deepflex project was dead and the half-finished warehouse built for the operation had no tenant. Port of Pensacola director Amy Miller told the City Council that she believed that offshore industry would recover in 2017.

So far, the recovery hasn’t happened. According to AAA, crude oil has held steady all year – averaging nearly $53 a barrel, until last week when it dropped to $48.

When OPEC agreed to cut production by some 1.2 million barrels per day on Nov. 30, price rose to above $50 a barrel. As OPEC implemented their cuts, the U.S. ramped-up production and supplies. Domestic production rose 1.6 percent since the beginning of the year. Crude inventories also climbed a total 9 percent. Inventories first reached a new all-time high four weeks ago, and have grown every week since. The oil market finally responded after last week’s EIA petroleum numbers were released. Friday’s daily settlement of $48.49 per barrel is the lowest since Nov. 29, 2016 (the day before the OPEC agreement).

“Despite OPEC’s efforts to balance the market, traders were reminded this week that the global glut in oil still lingers,” Mark Jenkins, AAA spokesman, said in a press release yesterday.

Last March, Miller told NPR’s “Here & Now” that the low prices and lack of offshore production were a boon for the Port of Pensacola. At the time of the report, the port had three ships moored at its docks.

“The Bibby Sapphire’s going to be here for two weeks, the Skandi Seven will be here for five days, the Nor Goliath down at the other side of the port has been here almost five months,” bragged Miller.

“We’re making money and they’re not,” she said.

Buddy McCormick, vice president of Offshore Inland, was more pessimistic: “Depending on who you read and what you listen to, half of our customers, which are mostly the drillers, could go out of business next year.”

The Port of Pensacola’s ship maintenance business is no longer booming, since it’s put the vessels on cash basis after Offshore Inland run up a big receivable.

So the question remains for Mayor Hayward. What’s his plan?

4 thoughts on “What is Mayor Hayward’s plan for the Port of Pensacola?”