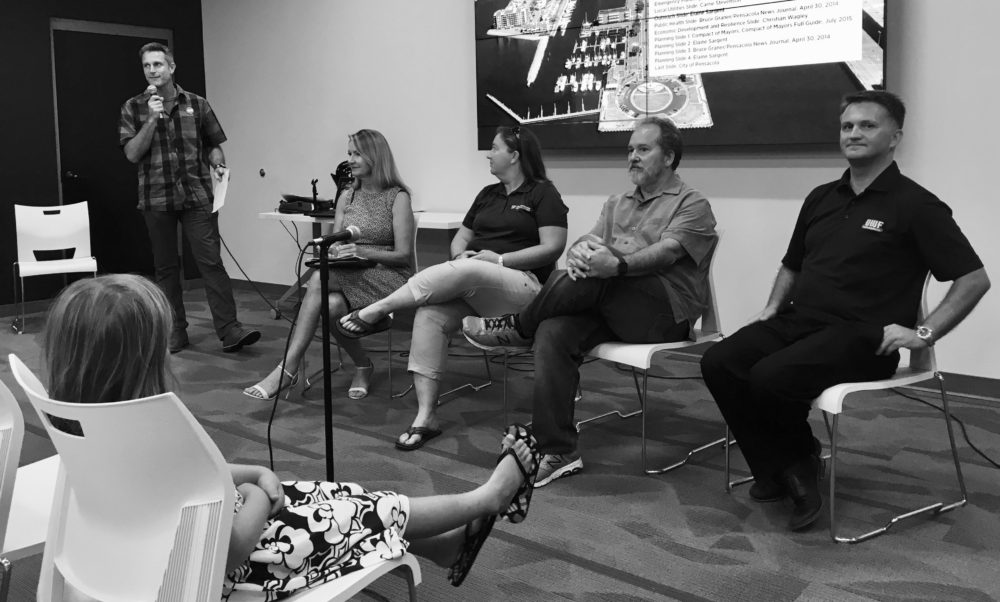 Last year, the city of Pensacola’s Climate Mitigation and Adaptation Task Force delivered a report outlining various efforts that could be made to address the effects of climate change. While generally heralded as just peachy, the report was promptly shelved in March, when Mayor Grover Robinson shuffled it into a state of limbo with a suggestion any action on recommendations be put on hold.

“He basically asked us, could we be a little patient,” said Pensacola City Councilwoman Ann Hill.

Both Hill and Richards were in attendance at a June 4 forum hosted by environmental organization 350 Pensacola, during which four members of the city’s climate change task force discussed their report and what actions they hoped the city would take.

“I think what we have here in the city of Pensacola is an amazing blueprint,” said Dr. Haris Alibasic, an assistant professor in the University of West Florida’s Public Administration program.

Alibasic was joined at the forum by Cynthia Cannon, an urban planner with Santa Rosa County, as well as Carrie Stevenson, coastal sustainability agent with Escambia County’s UF/IFAS Extension, and Dr. Wade Jeffrey, a professor of biology at UWF.

“With this blueprint we have a good starting point and I would hate if it just went into thin air,” Alibasic said, adding that acting on the report’s recommendations would require “strong leadership.”

“There’s great recommendations in the report, the hard part is going to be implementation,” said Dr. Jeffrey.

The task force members were unanimous in their top priority to emerge from their report: they all feel the city should focus first on creating a so-called greenhouse gas emissions inventory, essentially an portrait of the city’s carbon footprint.

“Without this report, we’re not going anywhere,” Alibasic said, describing the inventory as “doable” and the “cornerstone” to any mitigation efforts.

“Until you know how sick you are, what’s really wrong, you have no idea how to repair it,” said Stevenson.

Alibasic also pointed to the reports recommendations pertaining to renewable energy goals. The report suggested the city shoot for running on 30 percent renewables by 2030 and going full-100-percent renewable by 2040.

“We have to dream and think big,” Alibasic said. “The idea is to really start thinking big picture issues that could put Pensacola on the map.”

Mayor Robinson has downplayed both the greenhouse gas inventory recommendation, as well as the report’s renewable energy goals, saying neither is currently on the city’s radar.

Robinson asked that Myers hold off on the climate task force recommendations until after the city conducted a strategic plan workshop, which happened in May.

“Without concrete action from city council or city leadership it will seem like a futile effort,” Alibasic said during the 350 forum.

At one during the forum, Dr. Alibasic’s daughter came and sat on his lap. He said that considering the impacts of climate change on future generations is helpful in understanding the urgency of the issue.

“She’s going to be finding a lot more of these issues in the future and we’re not leaving a good planet Earth for them, and I think that’s key,” he said.

The task force members acknowledged that some of the difficulty in getting people to understand the importance of climate change and how it requires mitigating, lies in the fact that the issue of climate change itself has been politicized.

Stevenson suggested viewing the issue through a purely scientific lens, as oppose to a political one: “It’s not a political issue, it’s simply a scientific phenomenon.”

Alibasic said he was growing less concerned with convincing skeptics of the legitimacy of climate change: “I am struggling to say, ‘we need to convince everyone.’ Perhaps we don’t.”

Richards said that while the EAB’s official role in the climate mitigation-report process has been fulfilled, he would continue to encourage citizens to urge the city to act on the report.

“As long as I’m on the board, dust will not collet on this report,” Richards said.

Alibasic recounted how Mayor Robinson had been receptive upon the report’s arrival — “the mayor came to me and told me how great the report was” — and wondered if it’d be beneficial for task force members to reach out to him again and stress the importance of acting on the report.

“If you need us to help communicate that I’m happy to come in,” he said.

Councilwoman Hill said she remained hopeful that the city would circle back around to the climate task force’s report. She pointed to potential plans to refinance debt associated with the construction of Maritime Park, and suggested some of the $17 million realized as a result could be used to incorporate elements of the recommendations into municipal efforts going forward.