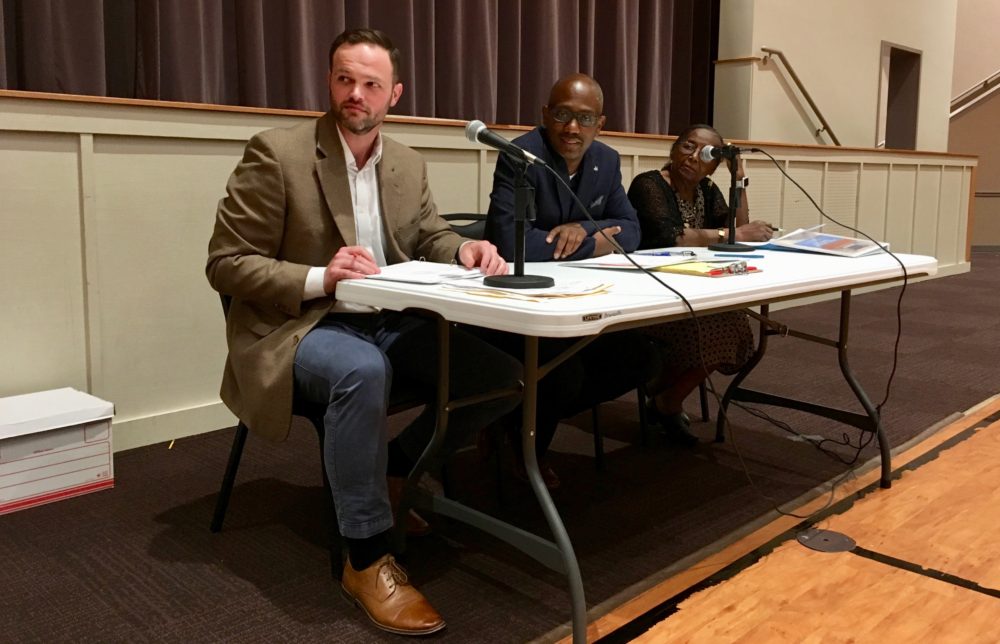 Rep. Alex Andrade knew it was going to be a tough evening. The District 2 Republican was sitting in the Brownsville Community Center for a post-legislative session town hall event June 5 following a run in Tallahassee during which legislators passed a number of bills that didn’t appear to be playing well in the room.

Like the decision to allow school districts around the state to arm teachers, a move intended to address school safety concerns in the wake of the school shooting in Parkland.

“I know that’s controversial,” Andrade acknowledged at the onset of the evening. “I know there’s considerations that cross racial and community lines. I understand that.”

Like, when Andrade was asked why the lawmakers weren’t making the necessary increases in teacher pay to attract the additional teachers needed around the state.

“Literally,” May shrugged, “if y’all’d voted for Andrew Gillum, a Democrat, every teacher would have made $50,000.”

Andrade’s local town hall was billed as focusing on recent educational developments in Tallahassee and for the most part the event stayed on script. There was, after all, plenty to discuss.

Of primary concern among attendees was the GOP-controlled legislature’s decision to allow public education dollars to be used for private and charter schools. It’s a move proponents defend as allowing parents and students a choice when it comes to education, while critics contend that it will drain needed resources away from public education while funneling it towards potentially unaccredited and unqualified private institutions.

“Philosophically, the concept of the public school system we have today is an outdated system.”

Members of the public who spoke at the town hall were all of the latter opinion, leaving Andrade as the move’s sole defender.

“Philosophically, the concept of the public school system we have today is an outdated system,” Andrade said. “This is going to be a difference of opinion and a difference of philosophy.”

“It’s like a product,” the school board member said. “We have to market our product. If the charter schools are more attractive, we have to be competitive with them.”

Chairman May argued that “charter schools are fly by night,” spoke about the importance of holding non-public institutions to the standards — “we can’t do it without regulations, we can’t do it without accountability” — and agreed with a member of the audience in describing a quality public education system as foundational in a democracy.

“Quite frankly,” May said, “it’s the great equalizer for the American Dream.”

While Andrade didn’t waiver in his support for the measure, he did concede that “Escambia County has been burned by some charter schools” and that he appreciated the public’s input. It wasn’t the first time he’d heard the critique though: the state representative’s mother is a teacher in Broward County.

“If you could see the novel she sent me via text message, you’d all lay off me a little bit,” Andrade said. “The tongue lashing has occurred.”

“We’re not taking this lightly,” Andrade said, assuring that gun-carrying teachers would be required to undergo screening and training. “We’re taking serious, adult approaches to solutions. We’re not saying everybody should be a cowboy.”

Speakers at the Brownsville town hall were decidedly opposed to the concept of arming teachers, asking the representative to square how they were suppose to be “teaching children to add and subtract and to read, while carrying a gun on their hips.”

The state representative — who voted for the measure — said he understood that most of the state’s urban school district’s were taking a pass and argued that the guardian program is intended “to allow some communities that are different than our’s the opportunity to put that option in place.”

In Escambia, Dr. Edler said, the district would not be arming teachers, but would be participating in the guardian program, incorporating armed protection in the way of law enforcement personnel or school security guards.

“You will not be a classroom teacher and a guardian at the same time,” Edler said.

“I’d never support it. You don’t fight fire with fire.”

May expressed skepticism in the overall concept of guns in schools, pointing to the recent series of shootings in the area and efforts to combat gun violence.

“I’d never support it,” the chairman said. “You don’t fight fire with fire.”

In addition to matters pertaining to education, Andrade, May and Edler also covered some non-academic grounds during their June 5 town hall. Issues addressed in the forum by members of the public included the need for job training in renewable energy fields, a request that the governor appoint a representative to the empty seat on the Emerald Coast Utilities Authority (ECUA) board and questions about how legislators were using the Florida Forever Fund to address environmental concerns.

Rep. Andrade was also asked about his thoughts on fellow Rep. Mike Hill’s comments concerning putting gay people to death; the Republican District 1 representative has said his remarks in reply to a constituent’s question have been misrepresented in the media, but legislators from around the state have demanded an apology or resignation.

“I hope the next time he’s faced with a question like that he has the courage to stand up for what’s right,” Andrade said.

Hill made a reference to the Old Testament containing passages regarding putting gay people to death after being asked if he might propose legislation allowing for the same. The May 23 discussion followed a question regarding Andrade’s support for a bill designed to protect the LGBTQ community from discrimination; Hill had said he didn’t know why Andrade supported the measure, which he said was not in line with Northwest Florida values.

The state rep went further in his comments regarding Hill, telling attendees at the town hall that due to Hill’s approach — “there are different philosophies for public service” — he has found it necessary to carry water for both his district and Hill’s when it comes to appropriation bills, and also needed to field calls from District 1 constituents.

When asked if Hill should resign in light of his recent comments, Rep. Andrade demurred — “it’s not my place to tell the leadership in the Florida House how to regulate its members” — and said he suspected the District 1 representative would be returning to Tallahassee next legislative session.

“He will be there next session,” Andrade concluded, “and my hope is after this ordeal he will become more of a partner in working for this community.”