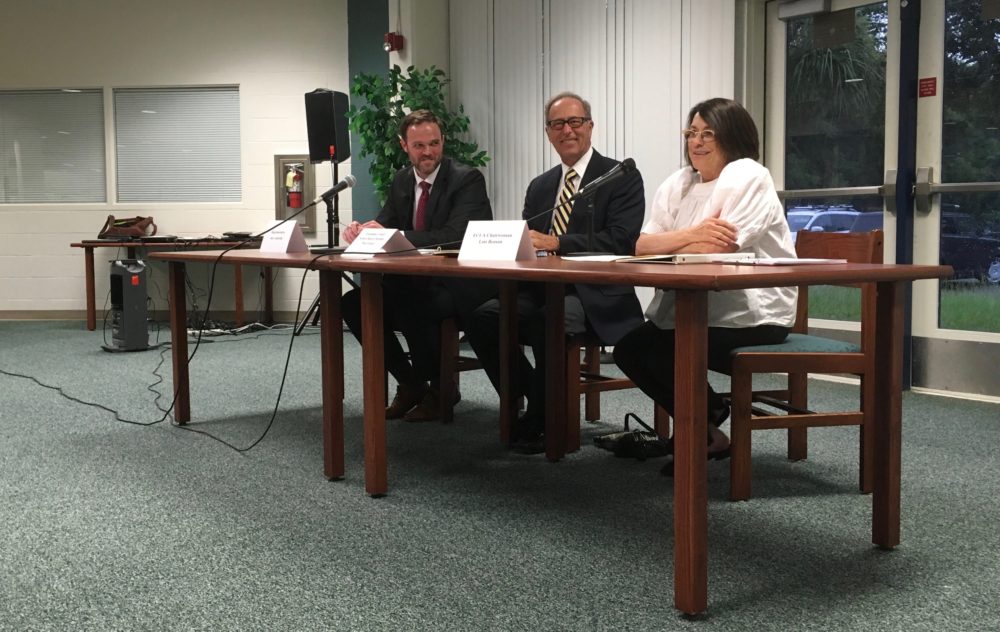 Three of the region’s elected officials held court in Escambia High School’s library Tuesday evening for the Westside Town Hall. During the nearly two-hour affair, residents were able to hear reports from and bring their concerns to state Rep. Alex Andrade, Paul Fetsko, the District 2 representative for the Escambia County School District, and Lois Benson, who holds the District 2 seat on the Emerald Coast Utilities Authority board.

With such a varied panel represented — covering education, water and sewer, as well as state issues — topics traversed a diverse range of subjects. There was a lot to discuss, everything from transitioning off septic tanks to local school grades to the implementation of Amendment 4, which restores voting rights to convicted felons.

On the education front, Fetsko talked about two new additions coming to the westside. Within the next couple of years, the area is due a new elementary school and Escambia High School will be getting an auditorium.

Escambia’s new elementary school is slated for the intersection of Sorrento Road and Blue Angel Parkway. It will essentially replace Pleasant Grove Elementary, and should be completed by 2021.

“The reason of that construction is the growth on the west side,” Fetsko explained.

Pleasant Grove, he said, is currently over capacity. The school will be shut down once the new facility is completed. The new school will also be taking on about 100 students each from Helen Caro School and Blue Angels Elementary, which are both currently at capacity.

Fetsko also spoke briefly about school grades. The state is currently wrapping up its calculations, with grades for each of the district’s schools due soon.

“By the end of the week we should know what’s going on there,” Fetsko said, adding that he didn’t expect any schools to suffer too much due to the final state calculations. “If there are drops, the drops are not significant enough to change grades.”

ECUA board member Lois Benson said she was glad to be invited to the westside town hall — “we’re kind of the red-headed stepchild of local government, people don’t really think about us” — and had a few items to discuss at Tuesday.

Benson began by relaying the ECUA’s recent loss of both its attorney and executive director. The agency just brought on a new attorney, and is in the process of searching for a new director, expecting to have someone by the fall.

“I believe it will go seamlessly,” Benson said.

But, the ECUA rep continued, prior to deciding on an executive director, it’d be good to have a full board. Following the death of District 3 representative Elvin McCorvey in January, one seat is awaiting an appointment by the governor.

“The thing that bothers me most is one-fifth of the people of Escambia County are not represented in this decision,” Benson said, referring to the director search, before turning to Andrade: “If any of you have pull of Tallahassee, we sure would like to get that seat filled as we do this.”

Benson also spoke about the continued work of the ECUA to transfer area residents off of septic tanks and onto sewer. She mentioned specifically areas near Navy Boulevard, Brownsville and Navy Point.

“We’re not just giving sewer to these neighborhoods, we’re protecting our environment,” Benson said. “Because no matter how well septic tanks function, and some of them function very well, contaminants leech into the ground and ultimately into our waterways.”

So far during her tenure on the board, Benson said, ECUA has taken 2,600 septic tanks offline. Next year, she hopes to get state funding to put toward transitioning from septic to sewer, which she said cost about $2,000 per tank.

Another item the ECUA board member wanted to speak about was the area’s aging wastewater infrastructure.

These old pipes lead to something called I-and-I, or inflow and infiltration, which is when stormwater breeches the pipes and overwhelms them. Since 2010, ECUA has spent $27 million surveying and tending to its roughly 1,000 miles of pipes, and the agency is expected to spend another $100 million on the effort over the next 10 years.

“I-and-I is the Pac-man that is eating up our budget,” Benson said.

Recycling was also on Benson’s radar Tuesday. She acknowledged that the bottom had fallen out of the recycling market, but said ECUA — with its new recycling facility — was still committed to the effort.

“Right now, recycling is a losing proposition. It costs us money to do it, but it doesn’t cost as much as it does to put that material in a land field,” Benson explained. “We believe we can weather this, and we are weathering it. And we believe that the people in this community believe in recycling and that it’s an important thing to do.”

Tuesday’s town hall also featured a question-and-answer session with attendees. Many of the questions pertained to state-level issues and were directed to Rep. Andrade, while more than a few people came to the event with issues they said were specifically suited for a county commissioner (there was no county-level representation at the meeting). Some of the issues on people’s minds concerned Perdido Key beach access, trash-strewn parks, protections for trees and how to deal with abandoned boats.

One attendee asked about the state legislature’s recent move to allow for teachers to carry guns on campus as measure of protection against school shootings. Andrade clarified that the state left it up to the individual school district’s whether or not to allow the practice, but the man was looking for a committment from Fetsko that he would not vote for hiring a superintendent who favors arming teachers.

“At this point, I can’t commit to that,” Fetsko said, adding that he would lean toward not arming teachers — “I have said that, personally, I would prefer to have trained sheriff officers and law enforcement covering our schools and classrooms” — but also felt there may be circumstances that called for such a measure. “To paint it all with one stroke just won’t work.”

Another person was interested in the recent announcement that Baptist Hospital is planning a move. Directing her question at no particular official, she wondered why the hospital was moving so close to Sacred Heart Hospital and not the westside, which she said was underserved.

“Why wasn’t that hospital brought to this side of town?” she said.

“They’re going to a place where they can serve our entire county and our entire region,” Rep. Andrade replied, pointing out that the hospital was moving nearer I-110.

Andrade also fielded a question pertaining to the state’s recent decision to require felons to satisfy any financial obligations prior to having voting rights reinstituted. Last fall, voters passed Amendment 4, restoring voting rights for felon following the completion of their sentences; the state legislature has determined that fees associated with any crimes or court costs are part a felon’s sentence and must be paid off.

“In many cases they’re never going to be able to pay them off,” said an attendee.

Andrade said Amendment 4 was a “frustrating topic,” and one that the legislature “got a lot of flak” on. Insofar as the requirement pertaining to fees, the representative defended the move. He also said he favored the restoration of rights for felons who had completed their sentences (including fees) and rejected the contention that conservatives were against the measure because they thought former felons would vote Democrat.

“There are just as many conservative voters coming out of Florida prisons as there are Democrats,” Andrade said, “and I would love if they got their rights restored, not just their voting rights, all of their fundamental rights.”