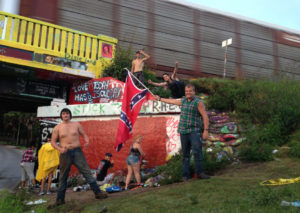 Two weeks ago, ESPN came to Pensacola to interview Seattle Seahawks wide receiver Doug Baldwin, Jr. He was putting on a football camp at Legion Field for the Southern Youth Sports Association and other area kids.

ESPN did a segment on a Facebook post Baldwin wrote about the Confederate flag in his hometown:

Hell, I’ve been known to rub people the wrong way during times when I have publicly stood for something I believed in. And I guess there is the occasional football rant. But that is a different story. Today I want to discuss this picture, depicting individuals demonstrating their freedom of speech, taken in my home town. It is not surprising to see, however, that it’s still a very frustrating image to me for various reasons. Why? Well, I grew up in this area and know the population all too well. A noose hanging from a rearview mirror wasn’t outside the realm of what I would see in my high school parking lot. My experiences in life have taught me that you can’t expect ignorance to educate itself. Being an African-American born in the South, there is some confirmation bias in play here but I’m going to attempt to share some history while stating my stance on the subject based on that history.

First, let’s discuss some facts of history. The flag that we are debating over is not even the original confederate flag. This information may seem irrelevant but it is important to point out for the sake of validity in my argument. Although it wasn’t the official flag of the Confederate States of America, it was the battle flag used by Robert E. Lee, a general in the Confederate Army. So the flag at some point did indeed represent the “rebel” cause. These “rebels”, for the most part, were fighting against the union in an effort to keep slavery in place. (You can check this fact by googling the Articles of Secession). For the sake of this argument, let’s negate that simple fact. (This is a key element to an argument a lot of supporters of the flag are making.) So, what is the relevance of the flag without the context of the Civil War?

Ever heard of the civil rights movement? In the late ’40s, the flag was an adopted symbol of the segregationist Dixiecrat party. Article 4 of their platform stated, “We stand for the segregation of the races.” In 1956, the battle flag was a prominent feature on the redesign of Georgia’s state flag partly in response to the Supreme Court’s ruling to desegregate schools just two years earlier. They have since removed it. The argument we hear today is that the flag represents “Southern Heritage” and “Southern Pride”. The only relevant “heritage” I could find in history not pertaining to the Civil War was associated with racism and segregation. Is this the heritage and pride you speak of?

That brings me full circle. By understanding the significant historical symbolism of Robert E. Lee’s battle flag, we can easily identify the various messages that flying the flag represents. But to all of you exercising your right to freedom of speech: Do you even know what you are supporting? To those arguing against the flag, make sure your argument is based on the facts.

I’m sure there are those individuals that understand what the flag stands for and still support it. And to that group I say, may God bless you because I’m having a hard time with grace myself. As a 26-year-old who grew up in the South around many supporters of the confederate flag, I would like to ask those same people to answer this question: What does southern pride and heritage really mean? Is it the sweet tea and hospitality? Or is this a sense of pride for the rebellious actions against a national government who had the audacity to say that secession was unconstitutional and slavery was wrong? Furthermore, I’d like to ask, how does this symbol, which produces such a strong feeling of offense by those who were oppressed under it, best represent that pride and heritage? If you can answer these questions and defend this flag in a way that isn’t rooted in a sense of emotional, stubborn pride for the oppressive intent this flag has represented in the past, then I’ll gladly commend you for it. But until then, I’ll be patiently waiting for the day ignorance can educate itself and will do my part to try and educate it in an assertive, respectful manner.