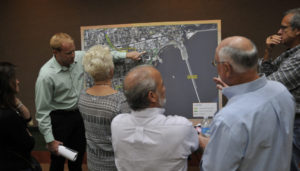 The Florida Department of Transportation hosted the third and final public meeting Tuesday for the State Road 196/Bayfront Parkway Feasibility Study. Representatives from FDOT’s District 3 were on hand at the Crown Plaza in downtown Pensacola to present information and answer questions about possible improvements for the waterfront stretch of roadway.

Information presented during Tuesday’s meeting — a casual affair allowing people to look over roadway potentials at their leisure — was the result of months of work and two previous public input sessions. It consisted of various stations where large roadway renderings outlined the potentials.

“We take all the public’s input and we flesh out what is feasible,” explained Tori Wilson, FDOT District 3 project manager for this feasibility study.

In particular, the feasibility study assesses current traffic and road conditions, and dives into future options ranging from doing nothing to implementing Complete-Street designs, installing roundabouts and improving signage directing freight traffic to the port. At this point, it’s all theoretical, as no funding has been secured for any improvements along Bayfront Parkway. If funding becomes available in the future, then engineering and environmental studies would need to be performed, after which another series of public input meetings will be conducted before any project is launched.

A primary catalyst for this feasibility study was the need to assess a Strategic Intermodal System route, or the route connecting two major transportation facilities, such as the port and the interstate. The study also explores ways to make the roadway more efficient and safer for pedestrians and bike traffic.

And while the Pensacola Bay bridge project is not connected to this feasibility study, the final study will take it into account.

“We are looking at the impacts the Pensacola Bay Bridge will have,” said Wilson.

If funding is eventually secured for Bayfront improvements, it will have to be determined which options laid out in the study will be tackled. For example, some low-cost items — such as new signage and restriping to allow for an additional turn lane at a congested intersection — could be carved out and addressed apart from more expensive recommendations.

Wilson said that FDOT expects to have the Bayfront Parkway feasibility study complete some time in December.