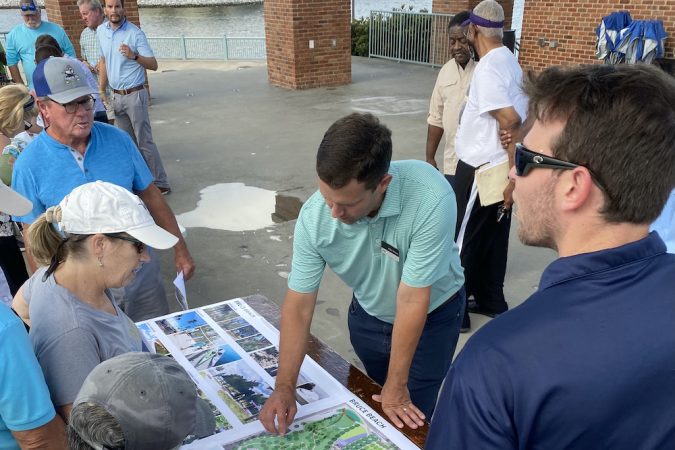 Bruce Beach is about to get a little splashier. The municipal beach near downtown Pensacola will be getting nearly $7 million in improvements as part of a larger waterfront-walkability effort.

“Just running through the list of things there, there’s just so many good things happening on that site,” noted Pensacola City Councilman Jared Moore, just before joining his cohorts Monday in approving funding for the Bruce Beach project.

Encompassed with the larger effort to create a walkable downtown that is better connected to its waterfront — an effort that includes the so-called Hashtag connectivity project, the Bruce Beach improvements will consist of walkways and overlooks, as well as a kayak launch, learning garden and historical elements that convey the area’s history, including its history as a segregated beach and important gathering space for the local Black community.

The nearly $7 million in funding approved this week by the council members sitting as the Community Redevelopment Agency (CRA) is for Phase One – the learning garden, history plaza, a pedestrian bridge to Maritime Park and some beachfront elements. Phase Two will include the overlook, as well as a parking area and some roadwork.

“It’s going to be a wonderful amenity to downtown,” Councilwoman and CRA chair Teniade Broughton said, speaking to Gina Wirth, a landscape architect with SCAPE, the New York City-based firm that has helped guide the city through the planning process for Bruce Beach.

Broughton, who sat on the committee exploring Bruce Beach’s history, said she especially appreciated the project’s historical component, which will include education signage.

“I think y’all are doing an excellent job of telling the story of Bruce Beach as a former segregated beach within the city,” Broughton said.

Wirth reflected on the years-long, pandemic-plagued process through which this vision of Bruce Beach came to be. The improvements slated for the beach result from numerous rounds of public input and planning sessions.

“It’s been a very engaged process,” Wirth said, describing Bruce Beach as “an incredible local portal to the water” that’s integral to the city’s walkability strategy and also as “a point of cultural and ecological reflection combined together within one of the city’s most important sites.”

Terry Horne, executive director of CivicCon, recalled first hearing Wirth speak during a 2018 event the organization hosted. Those remarks, he noted, led the city to plan for these improvements.

“The attraction of Bruce Beach, obviously, was connecting people to the waterfront and connecting Bruce Beach to Maritime Park,” Horne told the council, “If you look at the overall framework plan, it’s an integral piece to making a walkable, bikeable area all the way from the bridge down to Joe Patti’s and elsewhere.”

Recently city officials were alerted to research conducted by a University of West Florida professor that showed the presence of human waste in the waters off of Bruce Beach. Mayor Grover Robinson repeated his position Monday that the city will work with the Emerald Coast Utilities Authority to address sewage infiltration into the stormwater system.

Robinson said that the Bruce Beach improvements would act as an “impetus” to spur repairs to the aging downtown infrastructure that is allowing the sewage-to-stormwater infiltration.

“We’ve been talking with ECUA; we’ve got a commitment from them that we’re ready to move forward and do things that we need to do to deal with water quality,” the mayor said. “I think we can work with them and make those things happen. But we need the impetus to get out there and make that happen, and we have that with something happening.”