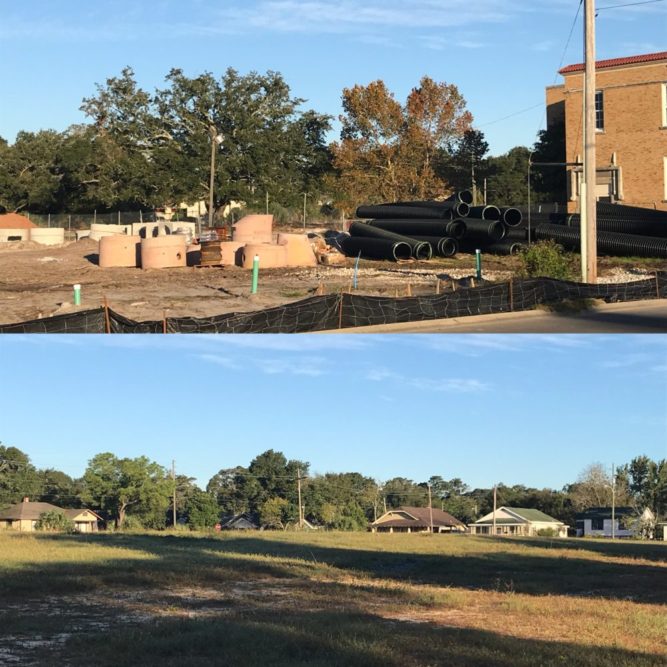 Last week on NewsRadio 1620, Mayor Ashton Hayward counted the development of the city block that once was the site of the Blount Middle School as one of his accomplishments on the west side of Pensacola.

“West of city hall is just taking off,” said Hayward. “From the Blount School property being redeveloped now to the A Street and its beautification to Corinne Jones to the fish hatchery enhancement center…”

Inweekly asked Hayward’s public information officer, Vernon Stewart, about the sale and what was causing the delay. Stewart did not respond.

Meanwhile, another former school property, Hallmark Elementary, that was purchased in July, a month after the city council approval of the sale to ParsCo, has begun site work on its project for 76 townhomes that will compete against the ParsCo development. Hallmark was owned by 349 LLC. Its original four partners were attorney Fred Levin, former BLAB-TV owner Fred Vigodsky, Matt Pair, the former business partner of Mayor Hayward, and An Hayward, the mayor’s wife. Levin and Vigodsky reportedly later bought out Pair and Hayward.

I reached out to Amir Fooladi of ParsCo but was unable to reach him.

Last year, the Pensacola City Council was criticized for its inability to finalize any deals regarding the Hawkshaw site near Gulf Power HQ. Mayor Hayward and his supporters pointed to that failure as an example of what’s wrong with council leadership.

The Blount School delay is squarely on the mayor’s office.