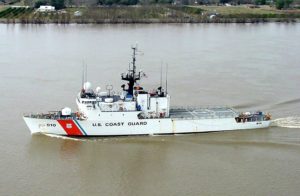 Press release: Veteran Coast Guardsmen from around the nation are gathering in their old homeport of Pensacola during the weekend of September 18 to dedicate a State of Florida Historical Marker that remembers the U.S. Coast Guard Cutter SEBAGO.

Pensacola Mayor Ashton Howard, Commander Eighth Coast Guard Disttrict, Rear Admiral David Callahan, and Rep Jeff Miller will be on hand to offer remarks. At the end of the 45-minute ceremony over three dozen of the old shipmates will be awarded the Coast Guard Sea Service Ribbon.

The military award was earned during their time aboard SEBAGO but was never given to the men in the 43 years since they left the ship. It’s believed this will be the largest ever belated award presentation of its kind in Coast Guard history.

The Coast Guard Cutter SEBAGO was first commissioned at the end of World War II as the fourth of thirteen Owasco class cutters. The immediate post war years saw SEBAGO assigned to San Francisco, Norfolk, and Staten Island. In 1949, while assigned to Base Staten Island, SEBAGO successfully rescued the four man crew of a Military Air Transport System C-47 after it ditched in the North Atlantic.

After a major refit in 1952 the ship moved to Base Boston for 18 months, relocating to Mobile in July of 1954, where it relieved the 1920’s era cutter TAMPA. For the next ten years SEBAGO was a mainstay of the Campeche Patrol, a designated mission area off the southeast coast of Mexico on the Yucatan Peninsula. Campeche Patrol ships helped assure access to prime fisheries by US flag vessels. The cutters normally carried a US Public Health Service doctor aboard, providing medical assistance and evacuation was a routine job for SEBAGO.

In July of 1964 SEBAGO and crew moved to Pensacola, where it remained until it was decommissioned in early 1972. From Pensacola the main focus of SEBAGO shifted to Ocean Station patrols in the North Atlantic. Deployments lasted up to six weeks, as the ship served a 21 day rotation “On Station.” Ocean Station duty called upon the ship and crew to provide constant communications and radar support for trans-Atlantic airliners; collect and disseminate regular weather and oceanographic reports for US and foreign weather services and the US Navy, and act as a mid-ocean dispatch point to render medical aid and maritime support to merchant ships and military vessels.

Although the 255 foot long Owasco class cutters were very heavily armed when built for WW II service, the vessels didn’t fire a shot in anger until they were called to Vietnam for Operation Market Time, beginning in 1967. SEBAGO spent a full year away from Pensacola in 1969 as she sailed over 22,000 miles to fulfill its mission of gunfire support, interdiction, patrol boat support and re-supply, and to provide a Medical Civilian Assistance Program to the people of South Vietnam.

Many SEBAGO veterans were originally from the Gulf Coast, and several others remained in the area after their discharge or retirement. Lonnie Mixon, a well known businessman and politician in Baldwin County, Alabama was aboard as a Sonarman during the late 1950’s. Pensacola Attorney Gerald McGill served as a junior officer on SEBAGO in ’65 and ’66. Pensacola retiree George Hooten probably served aboard longer than any other Coastie, more than six years in two tours in the late 60’s. Like so many of his shipmates, Mr. Hooten found a home in Pensacola and chose to stay. Hooten will be one of the speakers at the dedication – sharing with the audience a few stories and anecdotes of life aboard a Coast Guard cutter.

The marker will be dedicated in a ceremony held at Plaza de Luna at 10:30 AM on Saturday, September 19th. Pensacola Mayor Ashton Hayward will welcome the group. Scheduled speakers are Rear Admiral David Callahan, Commander of the Eighth Coast Guard District, and US Rep Jeff Miller, who is Chairman of the House Committee on Veterans Affairs. Highlighting the ceremony will be a flyover by aircraft from Coast Guard Aviation Training Center Mobile as “End of Watch” is rung out on SEBAGO’s bell – a 1945 artifact that has been held by the Mobile Chamber of Commerce since the late 1970’s. Also on hand for the ceremony will be an active duty color guard from Coast Guard Base New Orleans and Search and Rescue craft from Coast Guard Station Pensacola.

The ceremony is open to the public. Local area Coast Guardsmen, veterans, and especially the families of deceased shipmates are encouraged to attend to honor, remember, and celebrate the ship and its crew.

Full details of the reunion weekend may be seen at www.SEBAGOsailors.org/reunions.