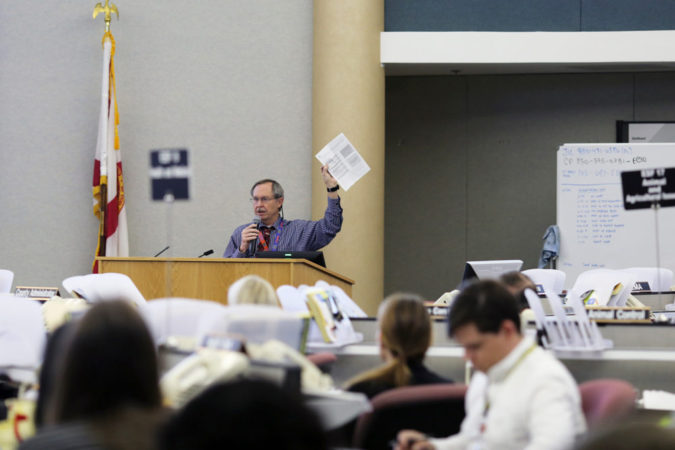 Dr. John Lanza, director of the Florida Department of Health in Escambia County, gave the Board of County Commissioners an update on the COVID-19 pandemic.

His presentation wasn’t on the published agenda for the commission’s regular meeting, and no notification was given to the media or public. The county sends out a daily update on COVID-19. The press release has a section devoted to DOH Escambia – Dr. Lanza’s update wasn’t mentioned.

“We’ve seen an uptick in the number of cases across the state,” said Lanza.  “I did send out a PowerPoint presentation this morning to everyone who’s on my distribution list, so far 50 people, which looks at the numbers statewide.”

Note: Uptick is accurate. Less than a hour after Lanza made his comments, the state reported 3,207 new cases – new record high.

Lanza said he is seeing the same sort of situation locally.

“Part of that is due to the fact that we are doing a lot more testing,” he said. “We’ve got the UWF folks out there. We have been and tested greater than 6,334 people who are either patients in or staff members of our 58-plus longterm care centers.”

Lanza didn’t have the daily testing information for the UWF drive-in site but said it’s between 200 and 300. He mentioned the testing sites of Community Health, West Florida Hospitals – only ER and surgery patients, Baptist Hospital – “at least two brick-and-mortar locations” and Sacred Heart – ” inpatients, the emergency department patients, and their drive-thru is still going on.” DOH Escambia’s walk-in facility at 1300 West Gregory location did 119-118 yesterday.

“So we’re averaging somewhere between 300 and 400 people a day, not including long-term care and not including UWF, which puts us significantly above the 2% for June–which is the latest program push to get testing in Escambia County and across the state,” said Lanza. “What I meant by that is 2% of the population tested in the month of June.”

Dr. Lanza said the county has  had an increase in its positivity rate from two weeks ago.

Lanza continued, “So why do we have the uptick? Part of it was the fact that we are doing more testing, but we are seeing an increase in numbers of family-related cases, between 6/1 and 6/8 and 6/9 and 6/15, I think is what it was, there was a 320% increase in the rate of cases within a family unit.”

“The vast majority of the increase for us, other than the fact that we’re doing a lot more testing, is the fact that it’s spreading amongst family members.”

He said DOH Escambia has detected nine families that had two or more cases, and one family had six cases where someone brought it into the family and infected five other people.

“The vast majority of the increase for us, other than the fact that we’re doing a lot more testing, is the fact that it’s spreading amongst family members,” said Lanza

DOH Escambia has passed out 132,000 masks in the past two weeks and received five pallets yesterday that will passed out  “to the county about 22,000, community health got 44,000, Baptist Hospital at 22,000, talking about Children’s Home Society, Council on Aging, the Agency for Peoples with Disabilities, predominantly African-American churches.”

“We’ve got masks for whoever wanted that,” he said. “The word from the surgeon general on Monday was getting mask to whoever wants it.”